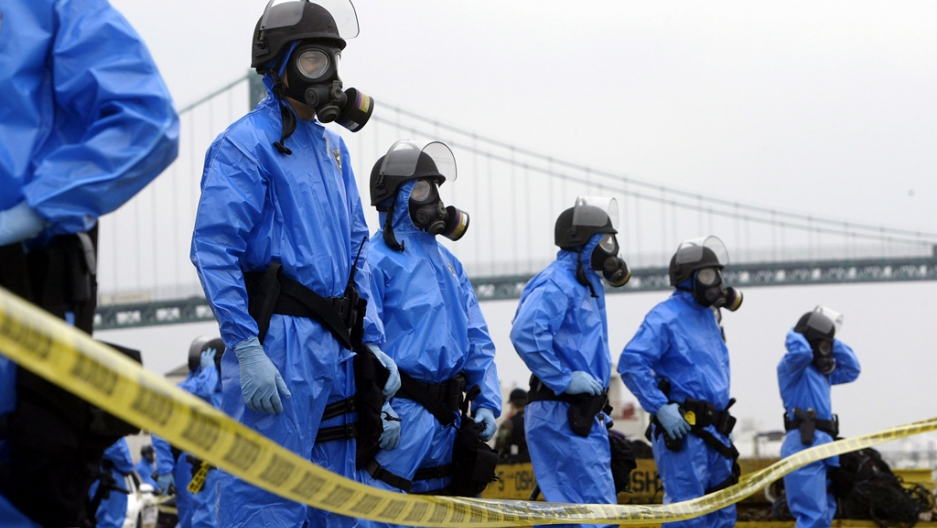 A simulation of the aftermath of a "dirty bomb" attack in Los Angeles.
Credit: David McNew
Share

GUADALAJARA, Mexico — The theft of a truck loaded with radioactive cobalt-60 in Mexico has authorities on both sides of the US-Mexico border in a flap.

And so they should be.

The highly toxic material was being used in radiotherapy to treat cancer and was described by the International Atomic Energy Agency on Wednesday as “extremely dangerous” to humans.

The IAEA issued its alert after a truck that was transporting the substance was stolen near Mexico City. GlobalPost's Dudley Althaus has the full story.

"At the time the truck was stolen, the [radioactive] source was properly shielded. However, the source could be extremely dangerous to a person if removed from the shielding, or if it was damaged," the IAEA said in a statement.

UPDATE: As of Thursday, the stolen shipment of cobalt-60 was recovered by Mexican authorities and secured. Officials said the radioactive material had been removed from its container and anyone who handled it could potentially die within days.

The US Environmental Protection Agency describes cobalt-60 as the “most common radioactive isotope” of the element cobalt, which occurs naturally in various minerals.

Cobalt-60 is produced for commercial purposes, and is also a byproduct of nuclear reactors. This isotope is particularly nasty and potentially deadly because of the cancer-causing gamma rays it emits — gamma 1.33 and 1.17 to be precise.

There's also the not-so-small matter of dirty bombs, but more on that later.

The degree of risk to humans depends on the level of exposure to cobalt-60 and whether the material was inhaled, ingested or absorbed through the skin.

While no one disputes the potential dangers of the material, it has a number of very legitimate and life-saving uses.

In Tijuana, it was being used to treat cancer, but it can also be used to sterilize medical devices and destroy pathogens and bacteria in food.

But cobalt-60 also has more sinister applications. In the wrong hands, it can be used to make what Slate magazine described as the “dirtiest dirty bomb imaginable.” Dirty bombs are conventional explosives that spread radiation over a wide area.

Cobalt-60 “fires off just enough radioactivity upfront to kill you (or at least cause serious cancers), but holds onto enough reserves to make wherever the cobalt rain settles inhospitable for future generations,” Slate said.