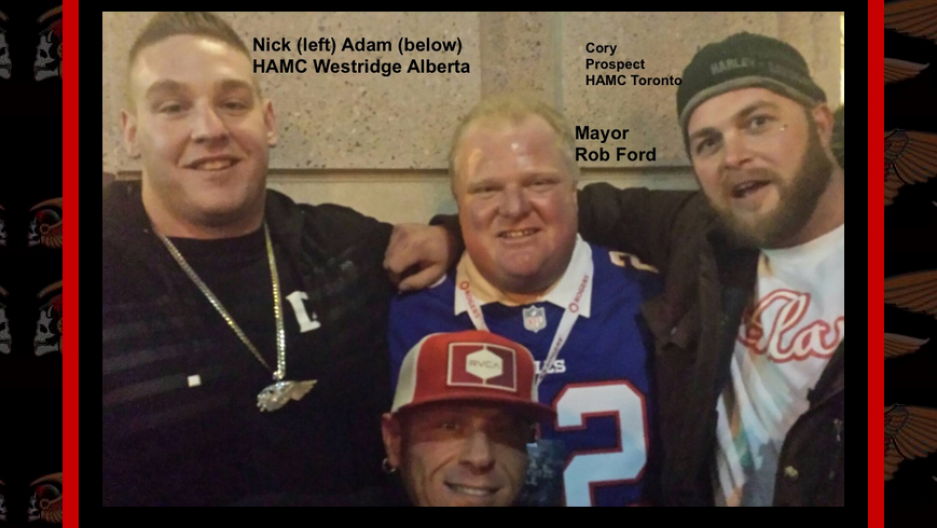 I promise I don't know these guys
Credit: (www.hellsangelstorontodowntown.com)
Share

The man seems more like he should be the hapless mayor of a country village than the mayor of North America's fourth largest city Toronto.

After admitting to using cocaine, getting blind drunk on occassion, including in public, using obscene language on television and in front of children, and then being stripped of most of his powers by the municipal council, things could not seem to get any worse for the mayor.

Of course they did.

Last weekend, at a football game the mayor caused a scene after he stole the seat of a local indie musician who took to Twitter to ponder how he should gently tell the mayor of the city to give him his seat back.

Rob Ford is sitting in my seat at the Bills game. He stole my seat. I don't know what to do.

Ford's appearance at the Buffalo Bills game also created mayhem, with fans swarming him for photos.

One of those photos appears to have been with members of the Hell's Angels motorcycle gang.

Ford explained the photo, which appeared on the website of the Toronto branch of the organization, at a Toy Drive for children.

"You guys and your photos," Ford said, appearing annoyed at the press.

"I don't even know what photo you're talking about … I took probably about close to 1,000 pictures before the game, during the game, at half-time... after the game.

"How am I supposed to know who's who? Seriously, I don't check for people's credentials and ask for resumes before I take a picture."

"I wasn't aware that I was taking a picture with the Hells Angels," he added.

Ford said that he takes a picture with everyone who wants to have a picture taken with him. Everyone.

Of course nobody is accusing Ford of buddying up with an organization linked with violent crime but, combined with earlier behavior such as smoking crack and palling around with known criminals, the timing could not be worse.