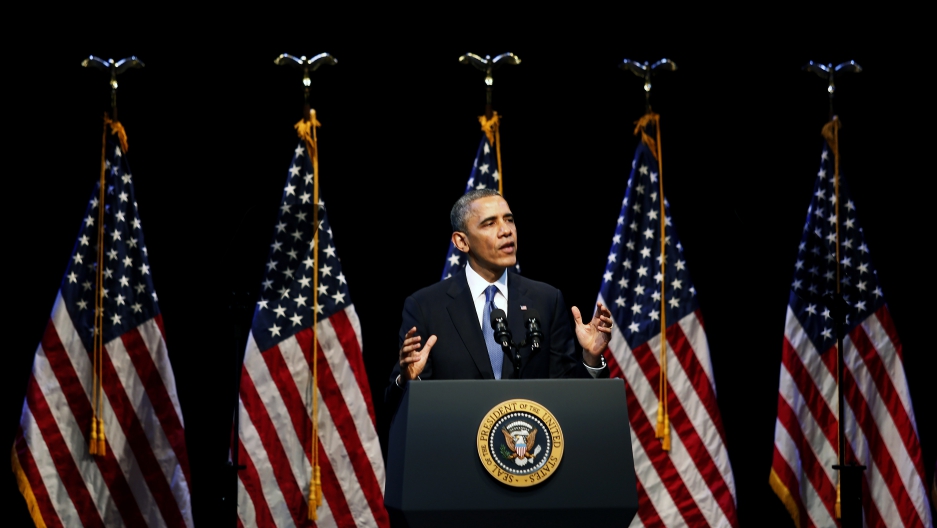 US President Barack Obama speaks on economic themes at the Center for American Progress December 4, 2013 in Washington, DC. Obama spoke at the think tank about economic inequality and a lack of upward mobility.
Credit: Aude Guerrucci
Share

After weeks dominated by the dysfunctional launch of his most important piece of legislation reforming the national health care system, Barack Obama on Wednesday tried to nudge the national spotlight on a deeper issue: the still growing gaps in income and opportunity between the richest Americans and the rest of the country.

Citing the words and deeds of presidents past — Democrats and Republicans alike — Obama equated income disparity as measured by an array of economic statistics as the “defining challenge of our time.”

Returning to an issue he highlighted in his 2013 State of the Union address, Obama said he wanted to dispel three myths about inequality he believes are keeping Americans from engaging with the issue: 1) that inequality primarily affects poor racial minorities; 2) that growing the economy and increasing equality are mutually exclusive; and 3) that the US government can't do anything about reducing inequality.

"The decades-long shifts in the economy have hurt all groups," Obama said before a friendly audience at the Center for American Progress, a liberal Washington think tank. "Some of the shifts that were once attributed to the urban poor…it turns out now we're seeing that pop up everywhere."

Just days after Pope Francis issued an apostolic exhortation eviscerating the “dictatorship of an impersonal economy lacking a truly human purpose,” Obama argued that government programs like Social Security and unemployment benefits are essential safety nets preserving the chance for Americans to move up in society, while casting the Affordable Healthcare Act as a positive step toward reducing inequality. He also advocated a "middle class economics" that prioritizes investment in public education, protection of workers' rights including strengthening collective bargaining laws and raising the national minimum wage.

More from GlobalPost: 'The Great Divide' — A Special Report on global income inequality

Obama noted that since he graduated from high school in the late 1970s, the US economy had roughly doubled in size, and yet more than half of the income created in the process went to the top 10 percent of American families.

Indeed, studies consistently indicate that US income disparity has been growing almost unabated since about 1970, accelerating during the 1980s and peaking just before the 2009 financial crisis, when they reached a level not seen since the crash of 1929.

The recession that followed the collapse of Lehman Brothers caused a temporary halt in the growth of the gap, but subsequent numbers suggest that the gap has again started to grow.

What’s more, separate studies show that the children of middle class and poor Americans are less likely than ever to attain the next rung on the economic ladder — a stark rebuke to the notion of the American Dream.

“A child born in the top 20 percent has about a 2-in-3 chance of staying at or near the top,” Obama said. “A child born into the bottom 20 percent has a less than 1-in-20 shot at making it to the top. He’s 10 times likelier to stay where he is,” he continued, adding that children from Germany, France and Canada now stand a far better chance of advancement.

“The combined trends of increased inequality and decreasing mobility pose a fundamental threat to the American Dream, our way of life and what we stand for around the globe. And it is not simply a moral claim that I’m making here. There are practical consequences to rising inequality and reduced mobility.”

Economists have tracked and debated the causes and the significance of the trend for decades.

But the idea that wealth disparity in America had reached Third World proportions certainly did qualify. In a recent series (and an upcoming ebook), The Great Divide, GlobalPost correspondents found that the levels of inequality in many American communities are approaching those of the emerging world.

Using the standard economic measure of income inequality known as the Gini coefficient, the series showed that many American cities now rank so poorly that they now have emerging world statistical doppelgangers — cities in countries just emerging from decades of dictatorship, dysfunction or worse whose income disparities precisely mirror those of American communities.

Obama echoed these concerns in Wednesday’s remarks. America, he said, faces “a dangerous and growing inequality and lack of upward mobility that has jeopardized middle-class America’s basic bargain that if you work hard, you have a chance to get ahead. I believe this is the defining challenge of our time: making sure our economy works for every working American.”