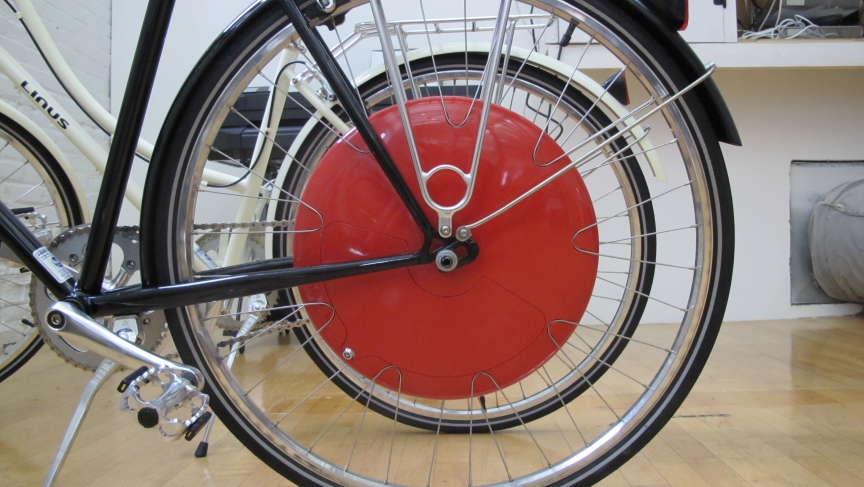 The Copenhagen Wheel gives your bicycle an electric boost, flattening hills and making your commute to work sweat-free. It went on sale December 3rd, 2013.

You might remember a bicycle innovation from France a few decades ago — the Solex. It was a precursor to the moped.

I used to admire it... a bike that gave you the option to stop pedalling, but keep moving. One problem, though: it ran on gas. Not exactly environmentally friendly.

Decades later, technology to make cycling easier hasn't really grown beyond the Solex. But a group out of MIT may have come up with a big improvement.

I just had my introduction to riding a bike with a Copenhagen Wheel. It's the result of many years, and many late nights, of R&D at Superpedestrian in Cambridge, just a couple of miles from The World's studios.

A prototype of the wheel debuted at the 2009 UN Climate Conference in Copenhagen. Copenhagen was already a bike-friendly city, but planners there wanted something that could get even more peope riding. That's where MIT came in. The answer was a self-contained, lithium-ion battery-powered motor in the rear wheel.

Imagine two fire engine-red Frisbees sandwiched together around the hub of the rear wheel, and you get a pretty good picture of the new device.

Jon Stevens, a vehicle control specialist at Superpedestrian, says everything you'd normally have for an electric bicycle was put inside their wheel.

"There's no external throttle," he says. "There's no external cables. All the sensors, all the batteries and the motor live inside this wheel. So you just put it on your bike like it's a wheel and you pedal it. And your bike's now this wonderful, magical, electrical bicycle."

The magic is actually the bicycle version of hybrid technology. The batteries recharge when you brake and when you pedal, storing energy for when you need it.

Everything is controlled by your smartphone, mounted on the handlebars. Wheel sensors also collect data on things like pollution levels and traffic congestion that can be shared with other riders.

So it's definitely easy to like. But it's not like you can walk into your local bike shop and get one. And even if you could, not everyone could afford it.

Four years after it was unveiled in Copenhagen, a limited number of the wheels went on sale this week at $699 a piece. The Superpedestrian website says the retail price will be $799 for those who don't get in on these early models.

Assaf Biderman, the founder of Superpedestrian, expects potential users will be won over by the wheel's aesthetics and the experience of riding it. Biderman says most electric bikes look clunky, and don't really feel like a bicyle.

"So we said, let's think of something that is really elegant that keeps the natural pure experience of riding. Just pedal," he says.

As a bike commuter, I get that.

Biderman is hoping potential bike commuters will, too. Those are the people who don't ride bikes because of their age, injuries, athletic shape or just because they don't want to come to work covered in sweat.

"If you can start to remove those barriers, then you've made a difference," he says. "So many of us have a bike sitting in our garage and we walk by them on the way to the car, even if we don't need to drive so far."

The Copenhagen wheel is just one way city planners and business people around the world are trying to create more choices for travel in cities. It's too early to say if this innovation will work the magic its inventors hope for.

But I do need a new wheel for my bike. And man, the Copenhagen wheel really is tempting.