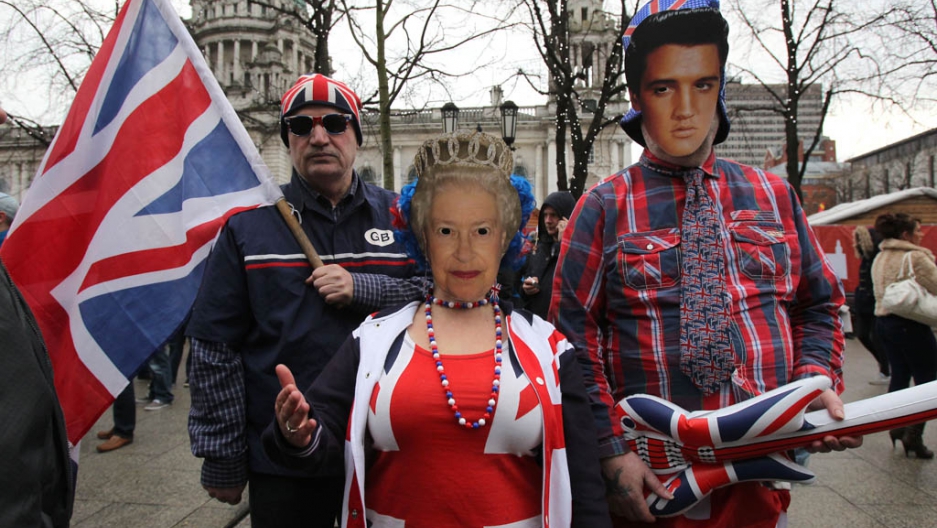 BELFAST, Northern Ireland — Julie-Ann Corr, 25, was inspired to take up politics last year when a controversy erupted over flying the Union Jack atop Belfast City Hall. But she encountered an unexpected dilemma: her sexual preference meant there wasn’t room for her in Northern Ireland’s ruling Democratic Unionist Party, which has twice blocked marriage equality bills in parliament.

“We’re both loyalists,” said Corr, a lesbian with a girlfriend she wanted to marry. “But we had no political representation. The only people we could look to for support were the LGBT groups or Sinn Fein.”

Fifteen years after the Troubles — the 30 years of violence between mostly Catholic supporters of a united Ireland and mostly Protestant advocates of Northern Ireland remaining part of the United Kingdom — LGBT rights have become a surprising casualty of a conflict that left Northern Ireland with a government vehemently opposed to change and a society where fixation on the unionist-nationalist divide has left little room for other aspects of identity to gain recognition.

In every other corner of the British Isles LGBT rights are on the march, but Northern Ireland has distinguished itself from its neighbors by digging in against change.

Last month, Scotland’s national parliament overwhelmingly approved, in principle, a same-sex marriage bill. Also in November, the government of the Republic of Ireland approved a marriage referendum for 2015. In England and Wales marriage equality is law, and same-sex couples will be able to marry next year. In Northern Ireland, zilch.

And marriage isn’t the only LGBT issue on which the country departs from its neighbors. This year, Northern Ireland’s government went to court to defend a ban on adoption for gay couples and a lifetime ban on blood donations from men who have had sex with other men. UK courts have struck down both measures, and a judge called the blood ban “irrational” because Northern Ireland accepts blood from the rest of the UK, where no such ban exists.

In October, a DUP legislator told schoolchildren that homosexuality is an “abomination,” though he says press reports took his comments out of context. The party — which maintains ties with a fundamentalist Presbyterian sect founded by its late leader Ian Paisley — and its leaders have a long history of railing against homosexuality.

While court reversals of the government’s adoption and blood donor policies have garnered headlines, other stories continue to fly below the radar.

For Orlaith Hendron, 29, the government policies that hit home hardest are those concerning fertility treatments — which require that a couple try to conceive for two years without success before seeking publicly funded treatment. That means Hendron and her partner are out of luck.

“As a lesbian couple we could try for 10 million years and we’ll never be able to get pregnant,” Hendron said, adding that if she applies for treatment “they’ll just look at me and say, ‘well you haven’t tried.”

She said she has considered relocating temporarily to another part of the UK where she could receive public treatment, but that the financial burden and personal disruption would be prohibitive.

Hendron, who runs support groups for lesbian women in Belfast, said in desperation, some have turned to private fertility treatments, which can cost $10,000 for a single round with no guarantee of success.

“They are remortgaging their houses. They’re selling their cars,” Hendron said.

She said homophobia remains an issue in Northern Ireland at large.

The DUP — which sponsored a “Save Ulster from Sodomy” campaign in the ’70s — has long made opposition to LGBT rights a priority, and Hendron said that the passions inflamed by sectarian conflict have given politicians here an unusual level of moral authority among their followers. Meanwhile, equality campaigns receive less energy, because people remain consumed by the unionist-nationalist divide, making it difficult for other social issues to attract attention.

Still, the social positions of the DUP represent the views of only a small, albeit influential, minority.

“The middle ground has evacuated politics,” he said. “It’s one of the consequences of conflict.”

The DUP’s unyielding opposition to same-sex marriage, for one, is not indicative of public opinion. One recent poll found 57 percent support for marriage and another found that while same-sex marriage opponents outnumbered supporters 30 percent to 27 percent, a plurality of respondents had no opinion. The DUP press office did not respond to multiple requests for comment.

Corr, the unionist who was drawn to politics over nationalist opposition to flying the Union Jack in public, ultimately joined the much smaller but equally loyalist Progressive Unionist Party.

Following an impassioned and personal speech from Corr at its conference last month, the party voted to make marriage equality a part of its platform. In a country where the youngest voters have expressed more liberal social views than their elders, that platform could be potent.

For now, the DUP’s staunch unionism is what matters in electoral politics, and its positions on gay and lesbian issues have not yet become an electoral liability. But as the society surrounding it changes, it is unlikely that the self-proclaimed protectors of tradition in Northern Ireland can hold out forever.

In a largely deadlocked system, Fealty said, LGBT issues are one area in which sentiment has been shifting. “I think from a political point of view this is going to become a problem for the DUP.”