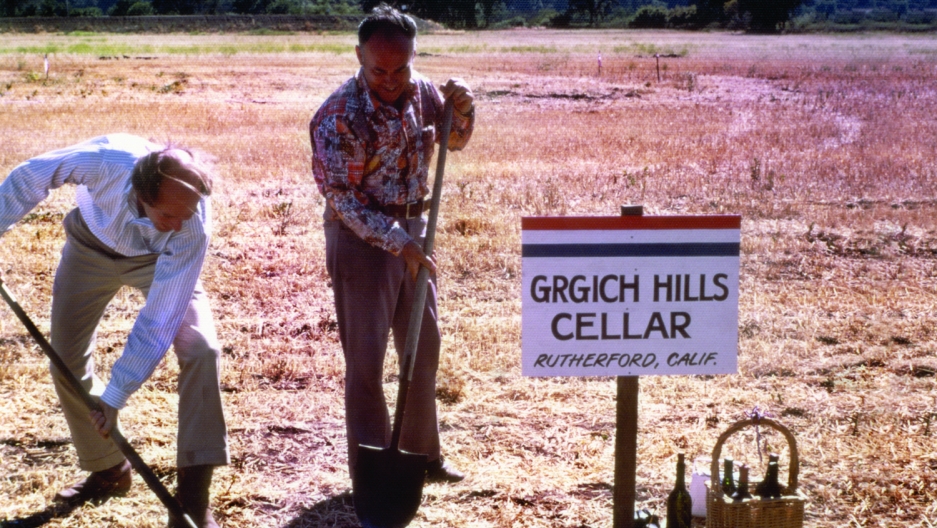 Winemaker Miljenko “Mike” Grgich turned 90 this year. He celebrated the way you'd imagine a famous winemaker would, at the head of a long dining table amid stacks of oak barrels, long rows of glasses sparkling in the light. But to get there, he came farther than many. His story traces the modern history of American wine, an immigrant's tale of rags to riches.

Grgich was born in rural Croatia, in 1923.  “I was born in the village,” he says, “in a poor family that had no running water, no electricity, no car, no telephone.”

He herded sheep as a child, scraped together an eighth-grade education, and then lost everything when Communists took over his town in the aftermath of World War II. You could make a movie just about the first 20 years of his life.

That would be on top of the two movies that have already been made about Grgich's story. But that part comes later. Before Mike Grgich became one of the most famous winemakers in the world, he was Miljenko Grgic, an Eastern Bloc kid with an American dream.

It started when he was studying agricultural science in Zagreb, and one of his professors came back from a sabbatical to California.  At first, Grgich says, the professor wouldn't talk.

“He was afraid to say anything good about America, because Yugoslav papers [were] only writing bad things about America. Rats running in the hospital, and things like that,” he says.

One day, Grgich recalls, he and other students cornered him. “We said, 'Tell us now, how California looks like.' And he looked around, and he said, 'California is a paradise.'”

That was all Grgich needed to hear. He left Yugoslavia on a United Nations-sponsored student exchange to West Germany, overstayed his visa, and landed in a refugee camp. Eventually, he made it to Canada, and took any job he could find: assistant dishwasher, dishwasher, waiter, and “flunky.”

He was working quality control at a paper mill when his US visa came through, sponsored by a Napa winemaker who needed help. The way he tells it, he got on a bus, with his winemaking books in a cardboard suitcase and $32 in the sole of his shoe.

“I was the last passenger in the Greyhound bus, and nobody waited for me,” he recalls.

But when he finally got to where he was going, he wasn't alone.  European immigrants, just like Mike Grgich, had founded many of California's first wineries, starting in the 1860s.

“Krug was Germans. Beringer winery was Germans. Martini was Italians. The Beaulieu vineyard was French. Inglenook was somebody from Norway,” Grgich says.

Today, the United States is the world's number-four producer of wine, and its number-one drinker. But in 1958, when Grgich arrived in Napa, only slightly more than half of Americans drank alcohol at all. Most wine wasn't the table wine Americans drink today, but fortified wine like sherry, and it wasn't very popular.

There may have been a good reason for that, says Grgich. “When I came to America, the quality of wine was questionable.”

His generation of California winemakers set out to shape it up, making American wine in the tradition of European producers. But despite the advances, Europe’s wine world — make that France — didn’t take Napa Valley seriously.

That all changed in 1976. For America's bicentennial, wine aficionados held a blind tasting that pitted the best French wines against the Napa upstarts.  Everyone expected the French to throttle the Americans. But the winner of the whites turned out to be none other than Mike Grgich's 1973 Chateau Montelena chardonnay.

It was one of the proudest moments of Grgich's life.

“For me, a little Croatian shepherd, [to have] won over the best French chardonnay, was a miracle. For the world, and for me,” he says.

Grgich's victory turned the wine world upside down, and made him an instant star in America. The next year, Grgich started his own vineyard, breaking ground on the 4th of July. Ronald Reagan served Grgich's wine to the president of France; Queen Elizabeth II tasted it on a visit to the US.

Today, there are more than 8,000 wineries in the US. Grgich Hills Estates produces 70,000 cases of wine a year. Napa Valley is part of American history — and Mike Grgich's 1973 chardonnay is in the Smithsonian, along with the cardboard suitcase he brought on that Greyhound bus.

But when Grgich tells his story, he's just as proud of the research he funded into the DNA of the Zinfandel grape, long thought to be uniquely American.

It’s not. Zinfandel’s roots turned out to be from Croatia.