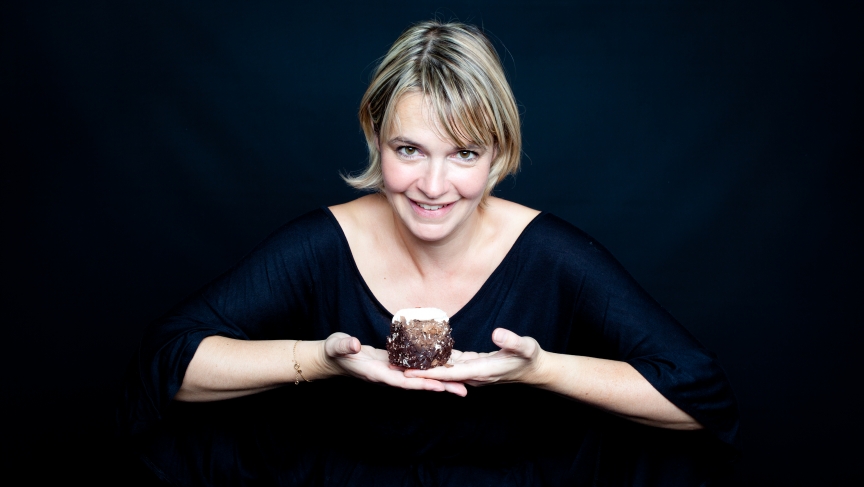 Anne Sophie Diotallevi and her version of the merveilleux, a cream-covered meringue.

The merveilleux is, as you might expect, something of a marvel. A French-born, Belgian-perfected cake, it’s formed by stacking shelves of delicate, crumbly meringue. (The adhesive is whipped cream.)

Just over a month ago, Anne Sophie Diotallevi opened New York’s first shop dedicated to the cake, named O Merveilleux. It’s her first food venture in the city. To make the cakes, Diotallevi wakes up early each morning to bake the meringues. To finish them, she cloaks each merveilleux in shredded chocolate — dark or white — or in crumbled speculoos, a type of spiced shortcrust cookie.

The whole process is a labor of love.

“The merveilleux has been part of my life since I was born,” Diotallevi says. She grew up in the city of Leuven, Belgium, just east of Brussels. Belgium’s a country that’s not short on either pastry shops or the pastry-lovers to support them. And, growing up, young Anne Sophie enjoyed a particular childhood ritual: each Sunday, after lunch, she was allowed to pick a favorite pastry for her dessert. The merveilleux, she says, won every time.

It was “the biggest one,” and she adds, “the only one that I chose.”

Don’t expect your merveilleux to last too long, warns Diotallevi. One gentle poke with a spoon and it collapses. “After that, you have to eat with your mouth and your nose, and not with your eyes, because it’s a mess on your plate,” she says.

We asked for her recipe, but Diotallevi respectfully declined. However, we did find a French recipe lurking on the Internet.