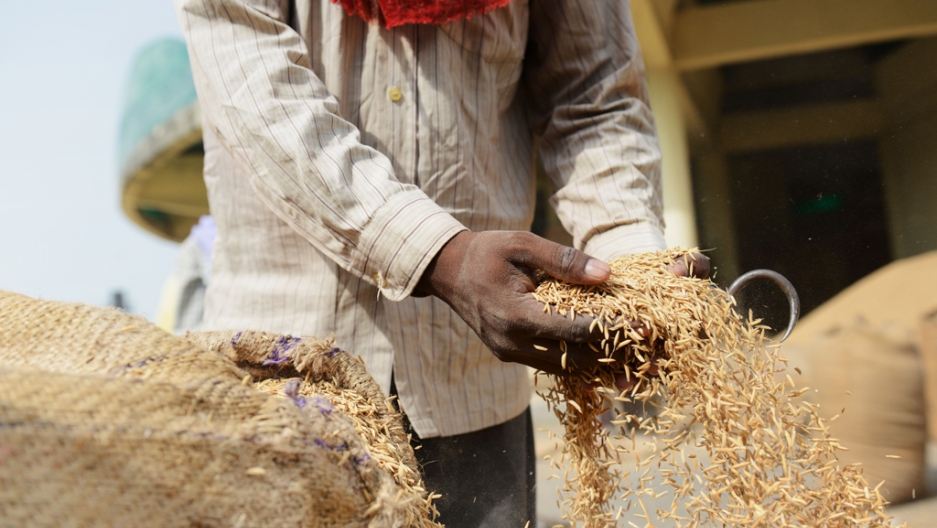 A low-wage earning Indian day laborer removes excess rice from a bag at a grains depot near New Delhi on August 27, 2013, one day after the Indian parliament passed a flagship $18 billion program to provide subsidized food to the poor that is intended to "wipe out" endemic hunger and malnutrition in the aspiring superpower.
Credit: Roberto Schmidt
Share

BALI, Indonesia — In the lead-up to this week’s World Trade Organization negotiations, the Obama administration has tried to block the implementation of a new program approved by the Indian government that could help feed its 830 million hungry people in a cost-effective way.

The Obama administration’s objection to the program is a direct attack on the right to food, and it threatens to kill the chances for any agreement at the WTO.

The Indian government’s newly approved Food Security Act is one of the world’s most ambitious efforts to reduce chronic hunger. Under the new program, the Indian government will buy staple foods from small farmers at administered prices, generally above market levels, thereby supporting the incomes of some of the country’s most impoverished people. From those stocks, the government will provide food to the poor, generally at below-market prices, and to public initiatives such as school-based lunch programs.

This is a cost-effective way to address chronic hunger, particularly in rural areas. It does not come cheap; the annual cost is estimated at $20 billion. But neither does the United States’ Supplemental Nutrition Assistance Program (SNAP), costing about $78 billion last year to assist a much smaller number of people. And in its budget negotiations and farm-bill proposals, the Obama Administration has made a point of defending funding for SNAP.

So what’s the problem with India’s plan?

The Obama administration’s objection is that such a program violates the trade rules agreed to when the WTO was set up in 1994. And it does, because those arcane and biased rules treat government-supported prices to farmers as a form of “trade-distorting support,” even if that support is for food security and supports only domestic production for the domestic market.

That is why India, Indonesia, the Philippines, and other countries that make up the G-33 group have been proposing since 2006 that the rules be updated to allow developing country governments to buy farmers’ crops at supported prices if the programs address food security. Such programs, these countries argue, should not be treated as “trade distorting.”

That proposal had largely been accepted when these WTO negotiations — called the Doha Development Round — stalled in 2008, also over US objections to food security proposals.

In preparation for the Bali ministerial, which runs Dec. 3-6, President Obama’s trade negotiators have taken a hard line on the G-33 proposal. The US, Mexico and Pakistan have withdrawn support for the food security proposal, instead offering a four-year “peace clause,” which states that no WTO member can sue any other member for such violations. After four years, all bets are off, unless there is an agreement to extend it or members reach a more comprehensive resolution of Doha issues.

India and the G-33 have rejected the proposal. In a letter to the Indian prime minister, Indian farmers argued that their country should not be expected “to mortgage its right to food and the right to livelihoods of the poor and the needy enshrined in the Constitution.”

As UN Special Rapporteur on the Right to Food Olivier De Schutter has pointed out, the WTO largely marginalizes the issue, treating “food security as a deviation from the primary objective of agricultural trade liberalization.” And in a statement released Monday, De Schutter said that developing countries must be allowed to use their reserves to improve food security without facing sanctions. “Trade rules must be shaped around the food security policies that developing countries need, rather than policies having to tiptoe around WTO rules,” he said.

The WTO’s new director general, Roberto Azevedo of Brazil, has tried to breathe new life into the comatose Doha Round by urging an “early harvest” of a limited set of measures, largely agreed upon previously, that make good on the development promise of the round. Disagreements forced Azevedo to suspend negotiations last week, saying that he did not see the political will to conclude an agreement.

Bali will be the battleground where the US government seems determined to display its cynical use of trade policies to undermine the ideals it claims to support at home, like food security.

What is really on display, though, is US hypocrisy. India’s Food Security Act uses the same measures that were part of US agricultural policy for years coming out of the Great Depression.

They worked for us, but India is not allowed to use them.

More galling, US domestic agricultural support was estimated to be $130 billion in 2010. Much of that support goes to crops like corn and soybeans that we not only export directly, we feed to livestock, making our meat exports cheaper. Talk about trade distortions.

Worse still, a longstanding US and EU commitment of the Doha Round to quickly reduce or eliminate export subsidies and credits — the most directly trade-distorting government support of all — remains vague, with no firm timetables.

Meanwhile, the US and EU had their own peace clause, written into the 1994 Agreement on Agriculture to protect them from suits over excessive subsidies. No four-year limit there, while a raft of trade-distorting support resulted in the widespread dumping of surplus goods by the US and EU on developing countries, undermining their producers.

We don’t need a peace clause, we need a hypocrisy clause. We need a commitment to reduce trade-distorting hypocrisy, with the deepest cuts coming from the most developed hypocrites.

Timothy A. Wise is the policy research director at Tufts University’s Global Development and Environment Institute (GDAE). He is currently on an Open Society Institute Fellowship on agriculture, climate change, and the right to food.

More from GlobalPost: Commentary: And the prize goes to ... genetically modified foods