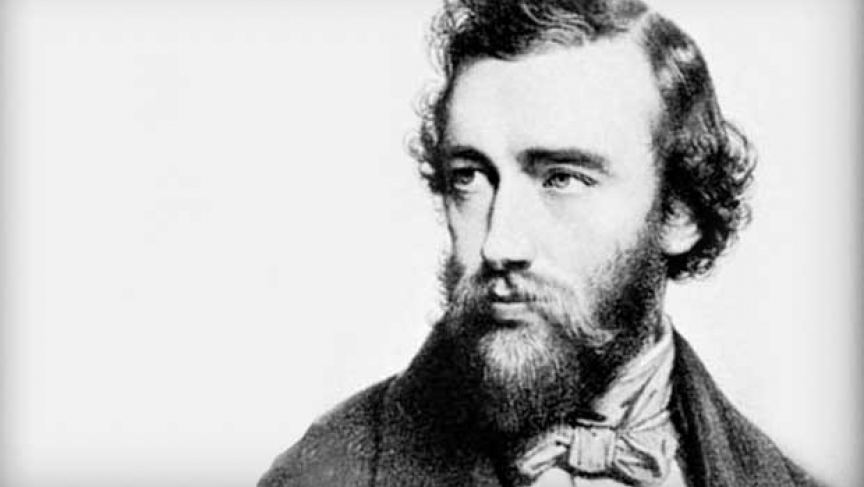 2014 will be the 200th anniversary of the birth of Belgian instrument maker Adolphe Sax.

Editor's Note: Here at The World, we always love to check out the Google Doodle. Friday's definitely caught our eye, or is it our ear? It celebrates the fact that 201 years ago, Adolphe Sax was born in Belgium. And that reminded us of Clark Boyd's appreciation of the "dangerous Belgian" who lent his name to the saxophone, among other musical instruments.

That's the message listener Pat White sent to us recently when we asked what you'd like to hear more of on PRI's The World.

"Back on November 6th, you missed the birthday of the inventor of the saxophone," Pat wrote.

It was an oversight, to be sure. But, it is a correctable one.

Antoine-Joseph Sax was born in Dinant, Belgium, in November, 1814. No one's quite sure why people started calling him "Adolphe."

Anyway, his family moved to Brussels when he was only a few months old.

Sax's father was a carpenter, and a maker of musical instruments. And from a young age, Sax learned the craft at his father's side.

“Little Adolphe had the opportunity to learn all about it in this workshop, and he was really great at it,” says Jo Santy of the Museum of Musical Instruments in Brussels. “He started out on his own instrument, the clarinet, more or less when he was 14 or 15 years old. He improved the instrument, changing the bore and exact locations of the holes, to make it sound better.”

Growing up without religion in the Soviet Union, believing in jazz

Without ska, there would be no reggae

Santy says the talented, and extremely entrepreneurial, Sax lit out for Paris in the early 1840s.

“His aim was nothing short of introducing a whole new range of instruments to the French Army, which was, of course, a huge market,” Santy says.

Sax wasted no time. He borrowed some money, built his own workshop, and started making a range of what he called "saxhorns."

These would later become famous as things like the flugelhorn, the euphonium and the bass tuba.

And then, in 1846, Sax unveiled a patent for a special something he'd been working on for a few years: a "saxophone." It was part clarinet and part ophicleide, an older, keyed brass instrument.

Except that Sax was, well, "a difficult personality."

“With Adolphe Sax, he was so controversial you were either for him or against him. This dangerous, dynamic, prolific Belgian who had arrived in Paris split up the musical world in France between pros and cons,” according to Santy.

And so, Sax made fortunes and lost them. He went bankrupt three times fighting lawsuits brought by rivals — rivals who, when Sax's 10-year patent ran out on the saxophone, started making their own versions.

The saxophone enjoyed success in chamber music, orchestras, but above all, in military bands.

Adolphe Sax died in 1894, and is buried in the Montmartre Cemetery in Paris. He had fought lip cancer and penury both in his later years.

His most famous creation eventually made its way to America, and the rest, as any jazz lover will tell you, is history.

“It was love at first sight, really, between jazz musicians and the saxophone,” Jo Santy says. “They play like they would sing it, and the saxophone is a very good instrument to do that. You can cry and talk and weep and shout on the saxophone, like you do with your voice.”

Santy says Adolphe Sax will be in the spotlight in Belgium next year, the 200th anniversary of his birth. In Brussels, the Museum of Musical Instruments will host a special exhibit on Sax and all his musical instruments. And in his hometown of Dinant, a major international saxophone competition will take place.

So, there’s plenty of time for listener Pat White to book a ticket. I recommend the bar next to the Citadel in Dinant, with its great views of the Meuse River and its excellent selection of Trappist beers.