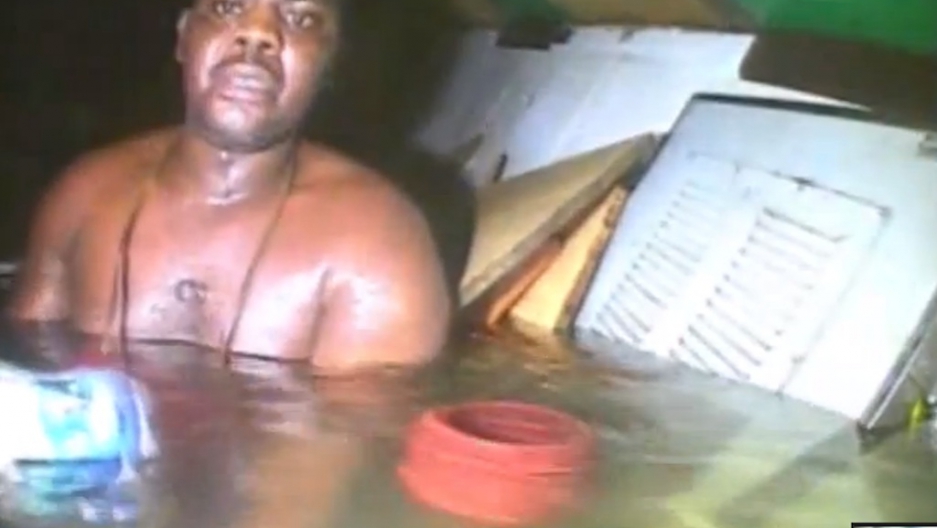 A screengrab from the video that has now emerged of Nigerian cook Harrison Odjegba Okene being rescued by divers after surviving more than 60 hours at the bottom of the Atlantic shows the first moments of the discovery that he was still alive.
Credit: Associated Press
Share

A video has emerged of Nigerian cook Harrison Odjegba Okene being rescued by divers after surviving more than 60 hours at the bottom of the Atlantic.

While news of Okene's rescue was first reported in June, the video of the two South African divers discovering the survivor while searching for bodies just went viral this week.

Okene, 29, was on board the Jascon-4 tugboat when it capsized on May 26 in heavy ocean swells about 20 miles off the coast of Nigeria while trying to stabilize an oil tanker filling up at a Chevron platform.

Okene somehow managed to survive by breathing inside a four-foot high air pocket that had formed inside the tugboat. The bubble began to shrink as the water slowly rose from the ceiling of the tiny washroom and adjoining bedroom where he sought refuge.

He was dressed only in boxer shorts and had just sips of Coca-Cola to keep him going. Ten others on board died, while one other crewmember was never found.

"I was there in the water in total darkness just thinking it's the end. I kept thinking the water was going to fill up the room, but it did not," Okene told Reuters, noting that parts of his skin started peeling away after days soaking in the salt water.

"I was so hungry but mostly so, so thirsty. The salt water took the skin off my tongue."

Okene said he was in the washroom at 4:50 a.m. on May 26 when the tugboat flipped over in the water.

"As I was coming out of the toilet it was pitch black so we were trying to link our way out to the water tidal (exit hatch)," Okene said.

"Three guys were in front of me and suddenly water rushed in full force. I saw the first one, the second one, the third one just washed away. I knew these guys were dead."

He was then swept into another washroom as the tugboat crashed onto the ocean floor 100 feet below the surface, and was amazed he was still alive.

Then, finally, on May 28, Okene heard the divers.

"I heard a sound of a hammer hitting the vessel. Boom, boom, boom. I swam down and found a water dispenser," he said. "I pulled the water filter and I hammered the side of the vessel hoping someone would hear me. Then the diver must have heard a sound."

Divers broke into the boat and saw Okene. They fitted him with an oxygen mask, diver's suit and helmet, bringing him to the surface at 7:32 p.m., more than 60 hours after the ship sank.

He then spent another 60 hours in a decompression chamber to return his body pressure to normal. Had he surfaced immediately, he would have likely died.

Okene says his survival can only be a "miracle."

"I don't know what stopped the water from filling that room. I was calling on God. He did it. It was a miracle."