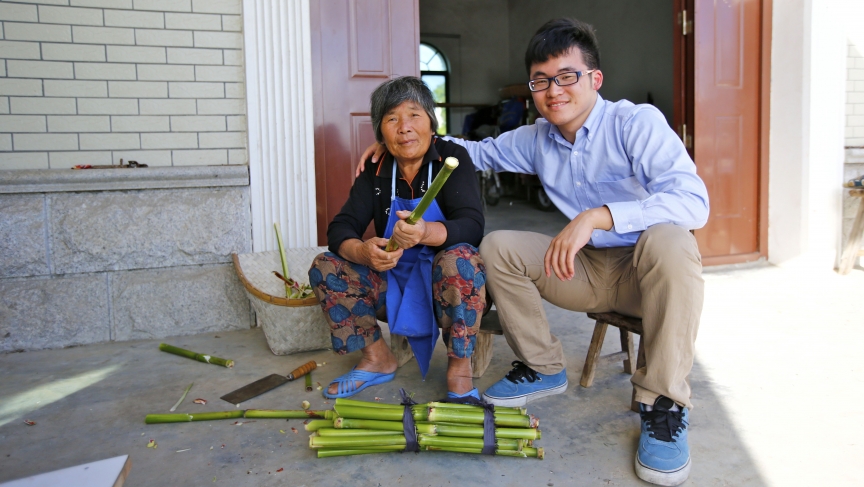 Gu Hangyu, sits with his grandmother Wang Yufang, at her home on Chongming Island near Shanghai. She speaks the Chongming dialect, but not standard Chinese.

It has four tones, strange "measure words" and thousands of characters to memorize. So for English-speakers, Mandarin can be an especially difficult language to tackle.

But here’s some more bad news. Even if you become fluent, you may not be able to communicate with nearly a third of the people living in China.

State media recently reported that more than 400 million Chinese are unable to speak Mandarin — the national language — while millions more speak it poorly.

Instead, they rely on regional dialects — some call them separate languages — that are so far apart, they’re mutually unintelligible. Even Mao Zedong, the founding father of the People’s Republic of China, spoke with such a pronounced regional accent that many Chinese had a hard time understanding him.

Today, non-Mandarin speakers tend to be older Chinese from rural areas, like the island of Chongming. It’s just 45 minutes by bus from the center of Shanghai, but linguistically it’s a much longer trip.

Gu’s grandmother, Wang Yufang, is one of the millions of Chinese who doesn’t speak Mandarin. As a farmer, her life has been hard. Corncobs fuel her stove and handpicked cotton fills her comforter. In winter, she heats her home with the energy from a car battery.

With her grandson translating, Wang said she doesn’t speak Mandarin, and has no need to. All her neighbors speak the Chongming dialect and so do the vegetable vendors in the market.

But Gu is less matter-of-fact. He’s worried his native dialect might fade. He also noted that some city dwellers look down on new arrivals if they speak with thick regional accents.

“I have a special feeling towards my native language,” he said. “I’m proud of Chongming. It’s a beautiful town. The people are friendly… the air is fresh, the water is clean.”

You Ruijie, a linguist at Fudan University, said dialects spoken widely in commercial hubs like Shanghai will likely survive for generations. Others are on their way out.

“I think some dialects, especially the small dialects, could disappear in the near future,” he said.

It’s a testament to today’s mobility and migration in China that You’s family speaks four dialects. Yet his son and his parents don’t have a single dialect in common. It’s a linguistic leap that’s not uncommon here.

You says for all intents and purposes, China’s 10 or so dialect groups should be treated as completely separate languages. He says it's like the difference between Italian and Spanish. At the same time, many Chinese minorities have their own languages, like Uyghur, Mongolian and Tibetan.

This adds another degree of complexity, especially for visitors. If you want to buy a necklace in Xinjiang in the west, or a cellphone in parts of southern China, you might get further in English than in Mandarin.

Wang Yufang and her grandson, Gu Hangyu, at her home on Chongming Island, near Shanghai. Gu says when he has a family, he'd like his son or daughter to speak his native Chongming dialect. Many young Chinese do not speak their grandparents' dialects.

On Chongming Island, Gu’s grandmother says she has no plans to take up Mandarin herself.

“She says it’s hard for older people like her to study Mandarin. It’s useless for them. But it’s useful for young people like me,” Gu said.

At 68, she added, she’s confident the Chongming dialect will outlast her. And if it is lost and she’s still alive, at that time, she said, “I will leave the world.”