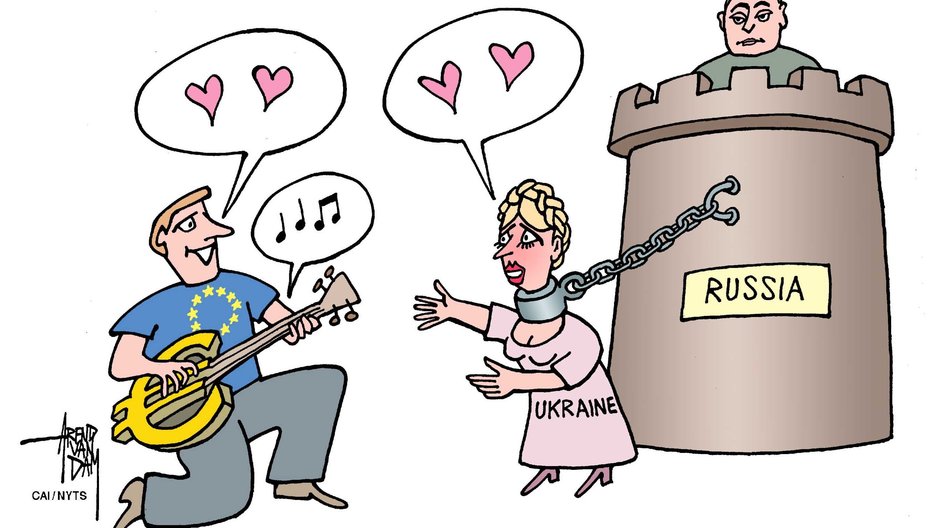 Russia's got it bad for Ukraine. It wants the large, former Soviet republic to stay within the Russian sphere of influence. Many Ukranians got it bad for the EU, dazzled by its modern looks and market economy.

As protests continue, Ukraine's president is looking for a way out of the love triangle. PRI's The World reports on why Russia is so lovesick and tied to the Ukraine.  And if you think we' pressed this metaphor too far, consider that Ukrainian protesters are actually chanting (to Russia) "If you love us, let us go."

Amazon got a great deal of publicity on Cyber Monday — the biggest online shopping day of the year — with its plan and video of cute "PrimeAir" drones delivering goods to customers in 30 minutes. But PrimeAir isn't near ready for prime time — and will probably never be, according to Wired.

The magazine points out, first, that the technology doesn't exist to do what the online retailer is proposing. Second, the FAA doesn't have regulations allowing the private use of drones at this point. And finally, the whole thing doesn't make a lick of economic sense.

Still, rumors were rife yesterday that if Amazon got its drones off the ground, hunters who don't fancy the idea of robots over their property might just shoot 'em out of the sky. That idea, too, was debunked by a reporter with some serious shooting experience at The Register, an online tech publication.

Jang Song Thaek, the vice chairman of North Korea's powerful National Defense Commission, seems to be out of a job — sacked by his Kim Jong Un, the nation's leader, and Jang's nephew. Of course, we say seems because, as with all things North Korean, it's hard to know what's going on within the reclusive government. His long-term status, even whether he's alive or dead, isn't known, Reuters reports.

It's after dark, do you know where your Pope is?

Pope Francis seems to wander outside the walls of the Vatican at night — but don't think he's up to no good. In fact, it seems he's headed out, dressed as an ordinary priest, to visit Rome's homeless men and women. As a cardinal, he would often sit, talk and break bread with the homeless, to show them they were loved, the Huffington Post reports.

The many flavors of yoga

You're probably familiar with yoga, and you might even have heard about hot yoga or pregnant yoga. But have you heard of shabbasana — a little bit of yoga mixed in with the Jewish Shabbat tradition? PRI's The World looks at the history of yoga, including its more violent past, and finds there is no one "true" yoga practice.

Aleksandr Bastrykin, head of Russia's version of the FBI, has a lot in common with former FBI leader J. Edgar Hoover. So much so, it seems, that he took large chunks of a book he published in 2004, "Znaki Ruki. Daktiloscopiya," from a book written about Hoover and another book on criminal science. Bastrykin's misdeeds were front and center at a recent speech he made in France. And while he could ignore and make jokes about hecklers accusing him of torture and corruption, the New Yorker reports, accusations of plagiarism sent him over the edge.

A freak thunderstorm with hurricane-force winds and hail rolled through Buenos Aires province in Argentina on Monday, damaging homes and cutting power. According to the Latin American Herald Tribune, winds of up to 87 mph were reported, taking the roofs off of 50 homes in Chivilcoy, 100 miles west of the capital city. Several people were injured, but none died.