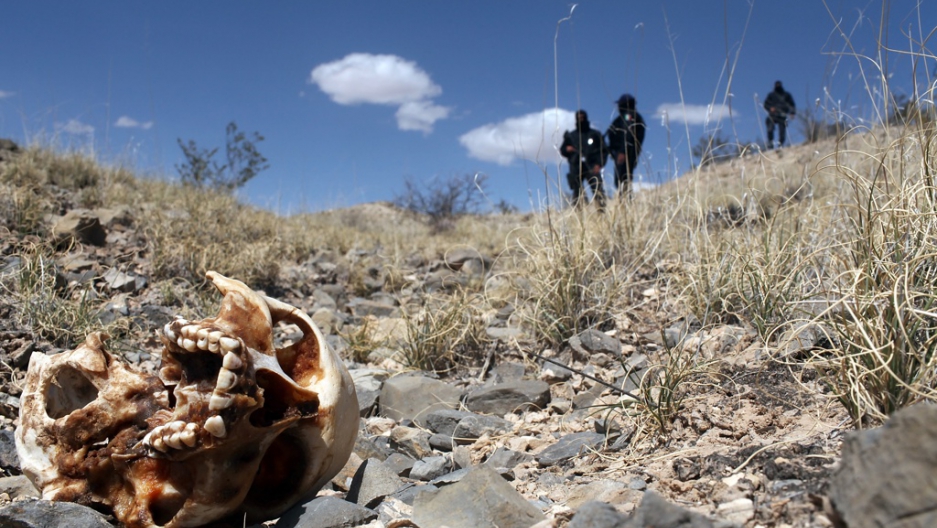 Mexican police stand near a skull discovered with other remains in what is thought to be a large desert grave of victims of recent drug violence, March 19, 2010, in Juarez county. (Spencer Platt/Getty Images)
Credit: Spencer Platt
Share

A total of 64 bodies were found in dozens of mass graves in the western Mexico state of Jalisco, bordering on the drug-plagued Michoacan state.

An official, who spoke to the Associated Press on condition of anonymity, said authorities had finished searching the graves on Saturday and that many of the remains had been bound or gagged. Some also showed signs of torture.

A total of 35 graves were found during the month-long search, which stemmed from a probe into the Nov. 3 disappearance of two federal police officers.

Forensic scientists said the officers were not among the dead found in the graves in La Barca, a town near Lake Chapala popular with American tourists and retirees, but also in a region disputed by the Knights Templar and New Generation drug cartels.

Officials said they would now try to identify the bodies, some of which had been buried for up to three years, according to forensic tests.

More from GlobalPost: Racehorses belonging to Mexico drug cartel Los Zetas sold at auction in US

The two missing officers, suspected by investigators of having been on the payroll of the feuding drug cartels, disappeared in an area between Jalisco and Michoacan at the beginning of November.

Their burned-out car was later found near the Vista Hermosa village.

Twenty-five people, including 22 local police officers, have already been arrested in connection with the disappearance.

An estimated 70,000 people have been killed in Mexico's drug-related violence since 2007.