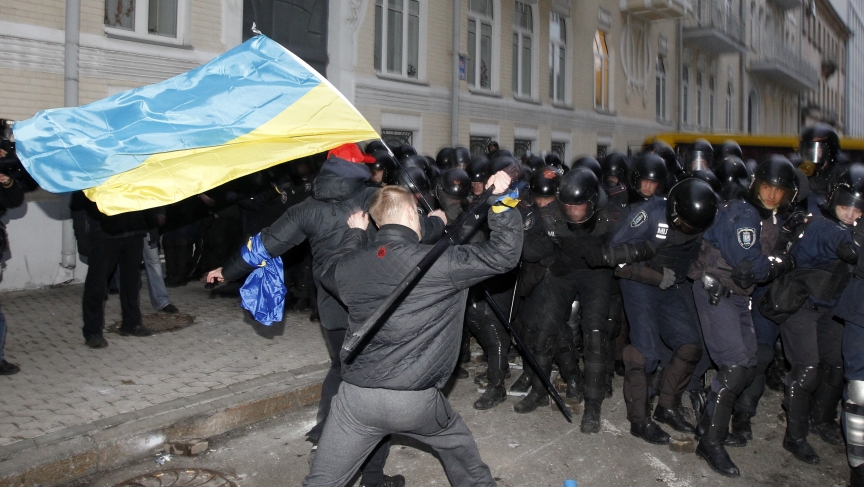 Protesters try to break through police lines near the presidential administration building during a rally held by supporters of integrating with the European Union in Kiev, Dec. 1, 2013. Hundreds of thousands of Ukrainians shouting "Down with the Gang!" rallied on Sunday against President Viktor Yanukovich's U-turn on Europe. Some used a building excavator to try to break through police lines at his headquarters.

Ukraine is not some small, former Soviet Republic. It's one of the largest countries in Europe. And its ties with Russia are deep.

The spark that lit the massive demonstrations in the capital city of Kiev was an abrupt about-face by President Viktor Yanukovych on a deal to establish closer ties with the European Union. President Yanukovych decided to postpone the deal and draw closer to Russia instead.

After protests in Kiev that drew as many as a million people over the weekend, a few thousand protesters have taken over Independence Square in the center of Kiev. They're setting up tents and blockading government offices. They're tired of Ukraine's current ties to Russia and want to be part of the European Union — which is unacceptable to Russia.

The BBC's Irena Taranyuk says to understand the relationship between the two countries, it's helpful to know Ukraine's strained history with Russia.

"Ukraine and Russia share the same roots, the same origins," she says. "Russia considers Kiev to be the capital of the Russian civilization — the cradle of eastern Slavic culture."

Taranyuk says Ukraine's independence, along with the independence of the 13 other former Soviet states, has always been a sore spot with Russian President Vladimir Putin.

"The 15 constituent parts of the USSR were presented as a fait accompli by [Russian President] Boris Yeltsin, [Ukraine President] Leonid Kravchuk, and [Belarus President] Stanislav Shushkevich. They signed the agreement that dissolved the USSR," Taranyuk says. "Other former constituent parts of the USSR still begrudge this trio, the fact that they were not consulted. And some of them, like Russian President Putin, still regard the dissolution of the USSR as the biggest geopolitical catastrophe of the 20th century."

She says Putin views maintaining strong ties with Ukraine as key to keeping Russia as an empire. You could say that Putin has a crush on Ukraine.

That's why many protesters have been chanting, "Putin, if you love Ukraine, let her go. Let her go where Ukraine choses to go." And for many Ukrainians, that is Europe.