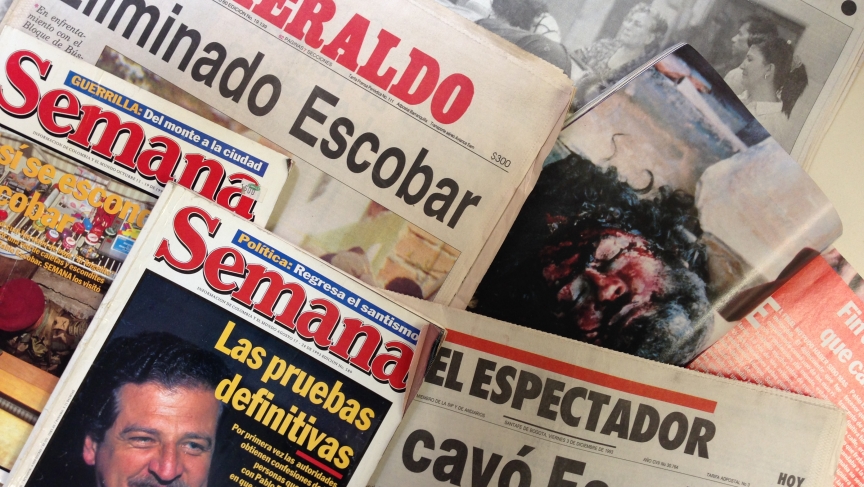 Colombian newspapers and magazines from December 1993 report on the death of druglord Pablo Escobar. Yolanda Perdomo saved them from that time.

I remember the day Pablo Escobar was killed. I was in my 20s and visiting my family in Colombia. All anyone could talk about that day was the manhunt for the country’s most feared druglord. He’d been on the run for more than a year.

Nothing else was on the radio or TV. You know the way people recall the Kennedy assassination? Colombians know where they were when government forces cornered and shot Escobar on a Medellin rooftop.

On that day, 20 years ago, my cousin Omar Gomez and I watched the news together in Barranquilla, a beautiful city where people sit outside at night to talk, play music or play soccer, without a worry.

But on Dec. 2, 1993, no one was outside. Looking out the window, I could see the glow of TV sets in the neighborhood. When I called up Omar recently to ask him what he remembers of that day, he says he was really hoping the violence engulfing Colombia was about to end.

“It was miserable,” he says. “Colombia was living in a state of terror because of all the violence. Pablo Escobar was a very violent man, bloodthirsty. Around here, we were in kind of in a daze.”

Now, I live in Chicago. The city had its own notorious crime boss, Al Capone, public enemy number one. Today, Capone is a big Chicago tourist attraction.

You can take the Untouchables Tour to see city landmarks, including places where Capone had his rivals gunned down. Craig Alton runs the tours in a fedora and pinstripes, and when he talks about Capone, he speaks in admiring tones.

“He had all the odds stacked against him, but by the time of 1927, '28 rolled around, he's one of the richest men on the planet. This was a Horatio Alger story for many people.”

In a way, that's Pablo Escobar's story, too. He grew up poor and ended up one of the world's richest, most notorious drug traffickers.

Thinking about Al Capone as a tourist draw, I began to wonder what Colombians in Chicago would make of Pablo Escobar morphing into a tourist industry.

At Mekato's Colombian bakery in Chicago, Elmer Londono stops in with his kids to pick up pastries. He lived in Bogota during the Escobar years and remembers what it was like.

Londono says he had a job installing glass. One time, he says, he went to install a glass door in a building and, two days later, a bombing ordered by Escobar shattered it. When he went back to clean up, he found torn clothes and it brought “tears to his eyes,” which is why Londono says he has no desire to see anything having to do with Escobar, even the popular telenovela about the druglord's life.

“It would be like reliving those tragic times,” Londono says.

My cousin Omar feels the same way. He knows there are already tours showing where Escobar lived, including Hacienda Napoles, his sprawling estate where the plane that took Escobar’s first drug shipment to the US greets visitors at the entrance.

“How could I go to a place like that knowing it belonged to someone who killed so many people? I'm going to take a picture of a plane for a souvenir? I'd never do it,” Omar says.

But his son, Omarsito sees things a little differently. He was only two when Escobar died. He says he’d like to go see Escobar’s estate.

“A lot of people would,” he says. “It’s now part of Colombia’s history.”