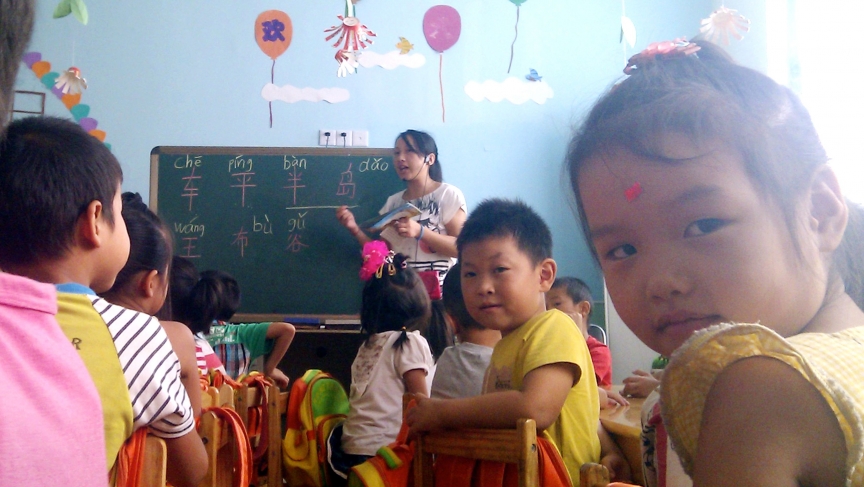 The children of migrant workers are taught Mandarin at a school in Shanghai. Many speak a regional dialect at home, and some don't speak Mandarin at all when they arrive for the first day of class.

As it stands, Mandarin is the language of government, commerce and pop songs in China. But not everyone is excited about learning it.

While the government insists Mandarin is necessary for social cohesion, some of China’s ethnic minorities have pushed back. Tibetan students, for example, have protested plans to shift nearly all their classes into Mandarin — a policy they say represents a larger campaign by Beijing to dilute Tibetan culture and assert political control.

There have been protests in Cantonese-speaking parts of China, too. People there are worried their native dialect is being forced out of public places and into the home.

But the general trend points in the opposite direction. Despite protests and lagging investment in rural education, not to mention the prevalence of regional dialects, Mandarin usage is growing at a breakneck pace.

Just seven years ago, state media reported only about half of China’s population spoke Mandarin, compared with about 70 percent today.

Steve Hansen and Kellen Parker are the founders of Phonemica, an Internet project that invites people to upload stories in dialects derived from old Chinese. They say China’s staggering economic growth is playing a big role in Mandarin’s expansion. Increasingly, Mandarin is the language of survival, and opportunity.

“I think, honestly, in many areas of China, government policy is lagging social desire,” Hansen said.

China’s unruly linguistic landscape is known for its groupings of wildly different dialects that go back hundreds of years, spread over a vast geography.

No Mandarin leads to menial jobs

On a recent morning in Shanghai, 60 kindergartners — the children of migrant workers from all over China — repeated phrases in Mandarin, while their teacher rewarded them with stickers.

School administrator Lai Zherong said many of the school’s students don’t speak Mandarin when they arrive. But they pick it up quickly. Without Mandarin, she said, they risk being slotted into menial jobs when they grow up, on construction sites or factory lines.