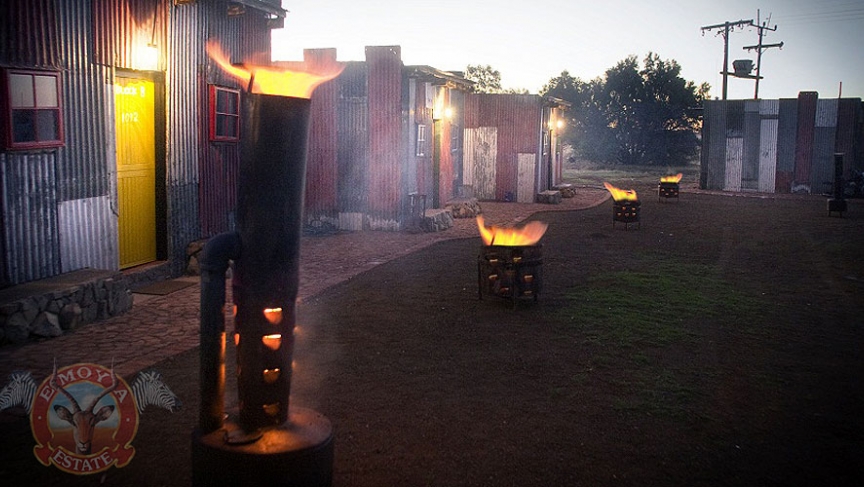 Emoya Private Game Reserve, Conference Centre and Spa in Bloemfontein, South Africa has created a fake slum for wealthy tourists to experience slum life “within the safe environment of a private game reserve.” The introduction to the fake slum reads:

Millions of people are living in informal settlements across South Africa. These settlements consist of thousands of houses also referred to as Shacks, Shantys or Makhukhus. A Shanty usually consists of old corrugated iron sheets or any other waterproof material which is constructed in such a way to form a small “house” or shelter where they make a normal living. A paraffin lamp, candles, a battery operated radio, an outside toilet (also referred to as a long drop) and a drum where they make fire for cooking is normally part of this lifestyle.

Now you can experience staying in a Shanty within the safe environment of a private game reserve. This is the only Shanty Town in the world equipped with under-floor heating and wireless internet access!

Emoya has even posted a video of the mock shanty town on YouTube:

Most people online have described the idea as tasteless and disgraceful. Siji Jabbar, writing on This Is Africa, said:

"If you thought the idea of rich tourists on holiday taking time out for a walking (or riding) tour through a slum in order to stare at slum inhabitants like they’re animals at a safari was tasteless, insensitive and offensive, the people at Emoya Luxury Hotel & Spa in Bloemfontein, South Africa, have found a way to offer something even more tasteless.

"In case you haven’t heard, the Emoya people have built a fake shanty town consisting of 'shacks' so that guests can experience what it’s like to stay in a shanty town. For R850 (€60; $82) — about half the average monthly salary in South Africa — you and three friends, family members or colleagues can spend a night in a shack made of corrugated iron sheets. They 'shanty town' has room for 52 guests. I kid you not."

Siji explained why the idea is offensive:

"There are one billion people worldwide living in slums, and I'll hazard a guess that not one of this billion would continue to do so if they had a choice. Choice is the reason why the idea of 'experiencing' what it is like is complete nonsense.

"If you have to live in a shack built from cardboard and corrugated metal sheets, you are, relatively speaking, poor, and poverty is about not having choices. by accident of birth, you find yourself growing up and living in a shack in a shanty town. It’s not a moral failing, though some people appear to see it as such, but to the person living in a shack it can feel like failure, mainly because that’s the message society transmits. [...] It’s about fighting every day to hang on to your dignity, while others, knowingly or inadvertently, try to strip you of it. It’s about constant worry: will you have enough to eat tomorrow? Next week? Can you afford to get ill, and what happens if you do? Will your shack be demolished tomorrow morning because it was built “illegally', rendering you homeless? You can’t experience any of that unless you actually are poor, and you can’t walk away from poverty, or from your shack, overnight or in a week or when you've had enough of the 'experience.' So all any guest in one of these 'shacks' will experience is a night or more of camping."

Commenting on Siji's post, Kathy Smedley considered the idea to be simply stupid:

"This is just plain stupid!!! What in the world is wrong with the genius that came up with such a lame brained idea. Do they not know this is making fun of people who by no choice of their own live like this? Very tasteless idea, right along with the idiots who would actually PAY to stay in something such as this place. If someone wants to pay to stay in a shanty, let them stay in a real one, and then maybe they just might take their money and put it to good use, such as donating to a charity or homeless shelter that could use the dollars to help those less fortunate."

Another reader, a Kenyan slum dweller, pointed out what was missing in the idea: "They don't have the icing on the cake, CRIME."

"I have never seen a shanty with mattresses and bunk beds, or so nicely built for that matter. This is absolutely tasteless and insensitive. Shame, shame on Emoya. I hope that 100% of the profits are going to NGO's to help the poor!"

However, Dirk Pieters thought the idea was awesome:

"Its an awesome idea. Don't be so quick to judge. Living in a shack has all those bad things that you mentioned but it also has a heart and a soul of the township that you will never find anywhere else, especially in the stuck-up white suburbs where nobody dances in the street and nobody talks to their neighbours.

"Lots of those shacks that you judge to be so terrible are incredible works of labour,decorated and looked after with pride and Love. I think that Shack Chic was an amazing book that showed a side to South Africa that made me proud."

ONE, a movement of people around the world fighting the absurdity of extreme poverty, posted an article about the fake slum on its Facebook page and asked, “What do you think of this?”

Answering the question, Selina Dawn Kyle thought that the idea may help psychologically:

"actually….. if done right… it may psychologically help… the sad truth is that most people cannot understand or comprehend what it is like for others until they have stepped into their shoes… so LET THEM step into their shoes…. just dont put up any vending machines ok? KEEP IT REAL. They want to see, let them."

"Really good point, but I wonder if it really would help psychologically? One of the biggest burdens on the mind is lack of hope, people live & die in shacks, those wealthy tourist know they are getting out — those born in them may have little hope they will ever get out."

The idea would be brilliant, observed Sue Henderson, if it was for educational purposes:

"If it was being used to educate people then yes, it would be brilliant, but they're going to have heating, a proper bathroom and so on, so no. As the article says, even if you were a tourist living in a real shanty town for a while it wouldn't be the same because you could escape from it whenever you wanted. The people who genuinely live there rarely have that option.

I've long since got beyond being surprised at the arrogance and insensitivity of rich people."

Jan Zee advised, "These wealthy tourists need to live in a real slum, with a real family, for at least a week. Eat what they eat, live how they live, scavenge where they scavenge, wear what they wear, lie in their bedbugs, etc. Then they will get the real experience and will maybe actually do something to help."

Elissa Pitton Shuck noted, "Poverty for entertainment — a new low for sure!! Disgusting."

African Economic Development Plan asked on its Facebook page, “How do you feel about this? A fake slum for wealthy tourists.” Zita Bett responded: "Its so sad that money can buy even buy slum. [sic] Rich people hate to deal with other people's reality, so they create a facade of a reality."

This article by Ndesanjo Macha was originally published on Global Voices Online.