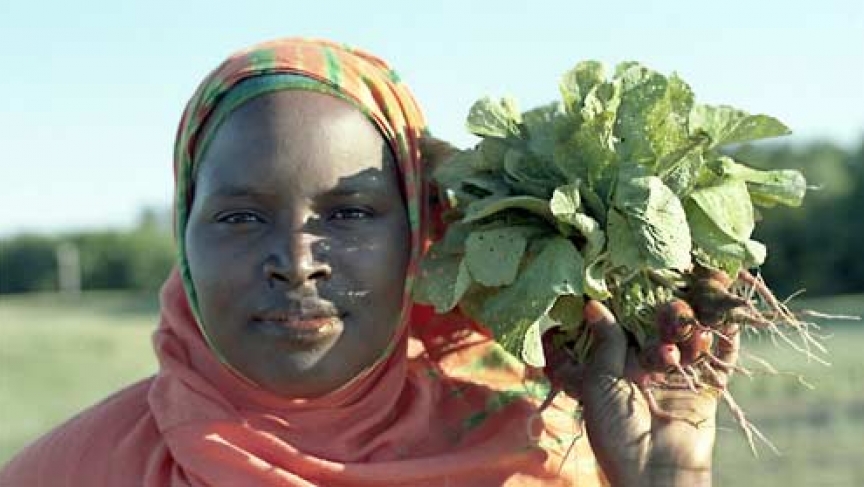 Habiba Noor shows off some of the produce she has grown on her farm in Maine.

When a persistent infection put farmer Batula Ismail in and out of the hospital this summer, her rows of carrots became consumed with weeds.

In another town, her plot might have stayed that way. But Ismail farms collectively with more than a dozen recent Somali Bantu immigrants in Lewiston, Maine. And her colleagues put off their own needy fields to crouch down together and hand-weed until Ismail’s frilly carrot tops emerged that uncharacteristically wet June.

Ismail and her fellow Somali Bantu refugees refuse to let the weeds overtake their hard-won fields near Maine’s second largest city. That they’ve come to embrace farming as exalted work is significant, given the ethnic minority’s history. Farming was about the last thing Somali Bantus expected to do after fleeing their country, which collapsed into civil war in 1991.

For 200 years, the Bantus had toiled as subsistence farmers along the fertile floodplains of the Juba Valley in Somalia, where they had been brought as slaves from Tanzania, Mozambique and Malawi.

“In Somalia, farming is low-caste,” says Daniel Van Lehman, a Bantu expert who worked as a UN field officer in the Kenyan refugee camps and assisted early US efforts to resettle the persecuted group here. “It’s like the untouchables in India — oh, let the Bantus do the farming. They did it because they had to. They were forced to do it by the Omanis, by the Italians, by the nomadic ruling Somalis and they’re forced to do it again today by the al-Shabab warlords.”

In Maine, however, Ismail and her fellow refugees found farmers revered as community pillars. Ismail, who is approximately 42 (Somali Bantus don’t traditionally track their age or date of birth) is a grandmother of six and single mother of nine. She came to Maine, by way of Baltimore, alone, as resettlement terms separated her from her husband, who had three other wives.

Others flocked here from Atlanta, Dallas and Syracuse, drawn by affordable housing, good schools and, importantly, access to land. About 13,000 Somali Bantus were resettled from Kenyan refugee camps to the US by 2007. Now they farm and garden around the country, but perhaps nowhere as intensively as in Maine, where one of the greatest concentrations of Somalis — roughly 5,000 (about 1,500 Bantus) — has resettled in Lewiston housing projects and abandoned multiplexes.

Even in a patriarchal, polygynous culture, Bantu women had long farmed in Somalia. They often controlled their own fields, accessed through landowning sons or husbands. But what is revolutionary now, here in the US, says Colby College anthropologist Catherine Besteman, is for such a low-income population to consume such an abundance of fresh vegetables that they grow themselves, since the health of refugees generally declines under the influence of cheap fast food in the US.

Resettlement agencies gradually realized farming could help these otherwise low-skilled refugees (who didn’t know how to drive and lacked literacy even in their native dialects) learn some English while improving their physical and mental health. There’s now a whole resettlement movement focused on agriculture, with scores of programs around the country since the US Office of Refugee Resettlement started funding such efforts in 1998. In 2004, the USDA signed a joint memorandum to significantly fund these programs, though money for such beginning and socially-disadvantaged farmers lapsed when the Farm Bill expired last fall.

And in Maine, women such as Ismail — who, unlike men, lacked job options outside the home — were among the first to enlist.

The program broadened in 2009, when NASAP merged with the youth gardening non-profit Cultivating Community. The farmers, who collaboratively market as Fresh Start Farms, sold more than $150,000 of produce this season to 300 CSA (community supported agriculture) customers, at 20 Maine farmers’ markets and to several restaurants. As the first group of farmers — nine of them, including Ismail — graduate from the program this fall, they’ll still lease land together and receive technical and business support.

“It’s really a great resource for people to be in a community of other farmers,” says NASAP director Daniel Ungier. “We try to be aware of the fact that sustainable agriculture is moving towards ‘interdependence.’ We don’t want to push them in the opposite direction by asking people to do it on their own.”

A decade ago, none of the refugees could have anticipated the rock star treatment they received at their recent graduation, which took place in a repurposed Portland church. The standing room-only crowd of 150 included young girls sporting jaunty headscarves, art school hipsters and graying retirees. Cultivating Community was selling its new locally-designed “Beyond the Vegetable” cookbook, featuring photographer Amy Temple’s vivid color portraits and recipes for farmer Hawa Ibrahim’s stewed spinach and green beans, farmer Seynab Ali’s sambusas and her son Hussein Muktar’s collards with onions and tomatoes.

The Somali women hung back as one of their male compatriots took to the stage, telling his migration story through Muktar, the farm’s translator, who mastered English attending school in the refugee camps.

“We’re so proud to be here,” Muktar relays. “We couldn’t have this opportunity without your support, and we appreciate it.”

Agriculture in Maine is at a crossroads. Some 250,000 acres of farmland could change hands as aging farmers retire in the coming decade. As this graduating class leaves, they make space for 50 new farmers at Cultivating Community. Many, including recent Congolese refugees, desire land to plant African crops such as amaranth leaves, spinach-like molokia and, especially, their beloved staple dried corn.

“There’s so much energy and enthusiasm around local agriculture, but there’s going to be a big change, too,” Ungier said at the graduation. “We’re so fortunate that we have a wave of people coming to Maine, with a history in farming, who really see farming as a way to make a home here and a way to give back to the place that’s been able to welcome them.”

Reporting for this story was supported by New America Media through its Women Immigrants Fellowship program. It was originally published in Modern Farmer.