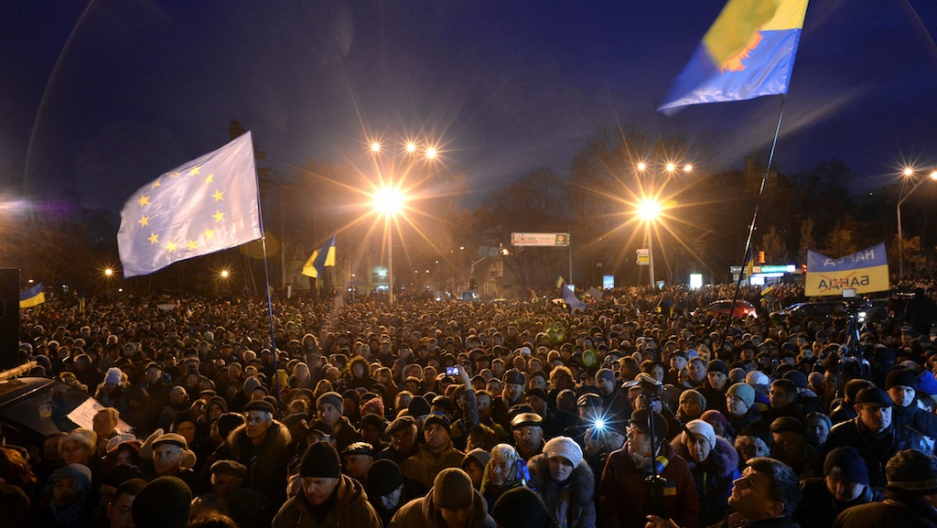 Ukrainian protesters blockaded government buildings in Kiev Monday, a day after more than 100,000 marched in protest of President Viktor Yanukovich rejecting a historic deal with the European Union.

It's been called the biggest pro-democracy demonstration since the 2004 Orange Revolution.

Some 10,000 supporters of the EU deal camped out in Independence Square Sunday night in order to keep the protest alive.

Around 1,000 protesters blockaded the government's main headquarters, preventing government employees from getting to work.

Yanukovich refused to sign an EU association agreement in November that would have opened up free trade and helped establish political ties between Ukraine and the EU, triggering the mass protests.

Some news agencies reported causalities in Sunday's clashes between protestors and police, according to the BBC. Reports also said authorities used tear gas and stun grenades to repel protestors near the presidential office.

Agence France-Presse reported about 100 police had been injured in Sunday's clashes.

Yanukovich suggested he had been forced to effectively chose between Moscow and the EU during the trade deal. Ukraine, he added, could not lose its trade with Russia, which openly opposed the agreement. For example, Moscow had banned some Ukrainian imports and said it may impose damaging trade sanctions.

However, in a recent statement the president said he would try and move Ukraine toward increased integration with the European Union. "I will do everything in my power to accelerate the process of moving Ukraine closer to the European Union," Yanukovich said

Yanukovich also said he was "outraged" by the violence, though on Sunday the Ukraine's interior minister said that police had been ordered to respond to large-scale disturbances.

Still, Ukrainians marched, waved flags and chanted slogans. "Down with the Gang!" some said, according to Reuters, as many demanded the president and his government resign while they called for a national strike.

"Our plan is clear: It's not a demonstration, it's not a reaction. It's a revolution," said Yuriy Lutsenko, the Associated Press reported.

This video, shared on social media, purportedly Sunday night's protests. Some of the contents of this video are graphic and may be disturbing to viewers: