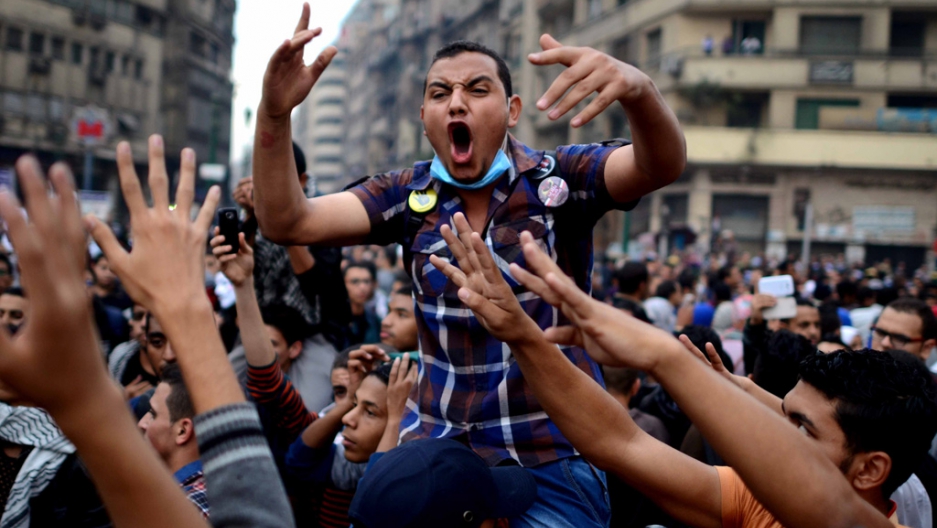 CAIRO, Egypt — Egyptian security forces clashed with student demonstrators in central Cairo on Sunday after thousands rallied in anger at the death of a young engineering student.

Mohamed Reda was shot Thursday by riot police after joining anti-regime protests at Cairo University. The young man’s fate has fueled defiance across the nation’s campuses, which since July have been experiencing their most violent period following the 2011 revolution.

Photos circulating on social media showed a gunshot wound to Reda's head. A forensic report seen by GlobalPost confirmed that the young man had also been hit with birdshot pellets in the head, chest and pelvis.

Hundreds of students, mostly supporters of ousted president Mohamed Morsi, have been detained in recent weeks as police continue to target members of his Muslim Brotherhood. On Saturday, police fired tear gas inside the Alexandria University campus to disperse protesters.

Universities are one of the last remaining sites of protest for opponents of Egypt's July 3 military-led takeover. Other traditional sites of mobilization, including the streets, have been heavily policed in the months since the coup. A draconian new protest law, passed Nov. 24, has made public gatherings even more difficult.

But although media reports focus on similarities between protests, there are ideological differences between the broadly pro-Brotherhood rallies at Cairo’s Al Azhar University and those being held on other campuses, where more demonstrators condemn the regime without denouncing Morsi's ouster.

Despite a state decree implementing protest limitations on campus, including a requirement for student organizers to notify authorities of their intention to protest and heavy fines for graffiti, students still say that campus is the easiest place to gather and protest.

“It’s a good space to mobilize in,” said Hend, a language student in the girls’ section of Al Azhar. “There are plenty of people here already, we all know each other, and of course it’s a private space. Security forces cannot enter the campus, unless it is at the request of the university authorities.”

But after Thursday’s lethal violence outside Cairo University, the educational authorities face mounting accusations that they have bowed to political pressure from the state, and are now willing participants in the quashing of dissent.

Students claim that university authorities are suspending those who make trouble in an attempt to curry favor with a government that has led an aggressive campaign to push the Brotherhood from public life.

Student activism has long been an incubator for Egypt’s future politicians. Nasserist and soon-to-be presidential candidate Hamdeen Sabahi famously used his platform as an elected student leader in the 1970s to criticize former president Anwar Sadat during a live televised debate.

The Brotherhood also has a long history of handpicking its members from university campuses.

“These have been one of two major recruitment points for the Brotherhood,” said Eric Trager, a fellow at the DC-based Washington Institute for Near East Policy. “Within every usra [local Brotherhood groups of seven members], you always have somebody whose job it is to handle recruitment, and that person usually spends a lot of time in universities.”

Egypt’s authorities say the Brotherhood is behind the latest wave of campus unrest. In a statement Sunday, the Interior Ministry described it as part of a plan conceived by Egypt-based members of the International Muslim Brotherhood, the organization’s global wing.

But participants say that the level of formal organization is difficult to trace. It is clearest in Al Azhar, Sunni Islam’s main seat of learning.

“My usra supports it, but we do not meet regularly anymore,” said Hend. “Our decision to protest is coordinated with our brothers on [Al Azhar’s] boys' campus. There are certain students there who hold the top level of responsibility for the organization of these demonstrations, all members of the Muslim Brotherhood. It’s not clear where they get their instructions from.”

The student division of the Muslim Brotherhood has long been one of the organization’s most active sectors. However, its leader, Mahmoud Abuzeid, was arrested in September.

“As a result, this segment is not functioning as it usually does,” said Trager. “But you still have a glut of Muslim Brotherhood students out there who are organizing among themselves.”

The harsh response from Egypt’s security services is bringing more students on board.

At Thursday’s Cairo University protest, shortly before Mohamed Reda’s death, a small but vociferous group had gathered inside the campus’ engineering faculty. Chants focused on the interior ministry and public prosecution, and students clutched banners bearing the faces of fellow students who had been suspended for their activism.

“Since the 30 June, we’ve repeatedly seen our colleagues, both here and at other universities, being targeted by the authorities,” said Amira, a first-year engineering student. “Some have been suspended for their activism, now they can’t take exams. Some even face prison sentences. These protests are for them.”

Amira said that while she previously sympathized with Egypt’s anti-coup movement, this was the first time that she had felt moved to protest herself. “Regardless of our political opinions, these are our friends. We have to defend them,” she told GlobalPost.

University officials, speaking to GlobalPost on condition of anonymity because they were not authorized to speak with the media, said that many within their number were against the decision of educational administrations to ally themselves more closely with the security forces.

“This is not the answer,” said one dean. “All it does is inflame the students’ grievances.”

Student unions have now joined forces with national political parties to condemn the government’s handling of the protests. In a press conference at the leftist Popular Current party office on Saturday, representatives from six different unions called for the dismissal of higher education minister Hossam Eissa and interior minister Mohamed Ibrahim.

Demanding accountability for the deaths of fellow students, they described Eissa as being politically responsible for legal violations taking place within universities, and said that Ibrahim should shoulder the blame for the killing of students.

The Egyptian authorities deny using disproportionate force on campuses. Diplomatic officials have circulated links to journalists, highlighting the restrictions that other nations place on student protests. “University of London bans students from protesting,” reads one piece of suggested reading, referring to a much-criticized University of London decision to threaten dissenting students with prosecution.

Experts now believe that the embattled Brotherhood will try to capitalize on the success of campus protests, subsuming often mixed grievances into their own narrative of oppression.

“We shouldn’t overstate the organization’s current capabilities,” said Trager. “But one of the best things they are able to do for themselves right now is converge on campuses where they can tap into other sorts of latent frustrations against the state.”