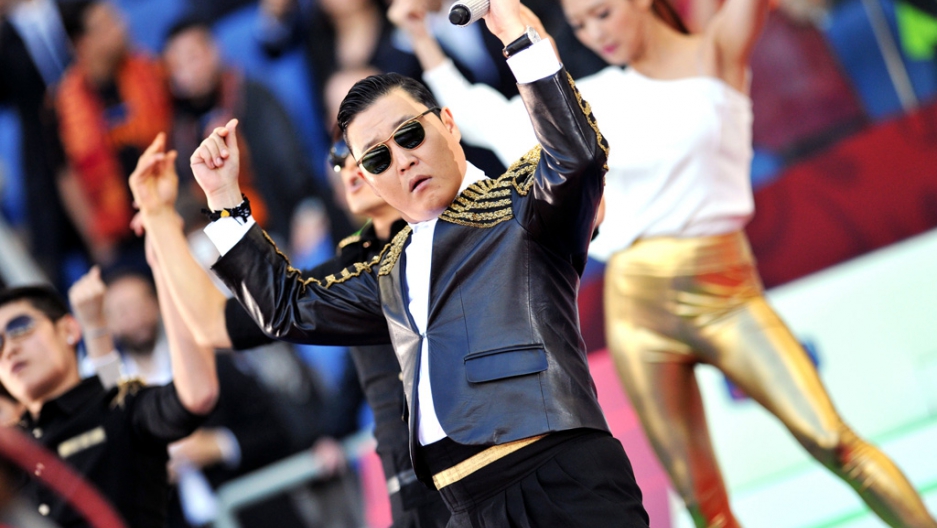 The narrative typically goes like this: Swarms of Western fans have been racing to K-pop concerts in recent years, falling in love with the young, colorful ladies of Girls’ Generation or the muscular, shirtless men of Super Junior. Thanks to their dazzling repertoire of, well, crayon pop songs, multiple concerts have sold out in the US, France and the UK. It’s a signal that the world is increasingly in awe of this homegrown Korean art.

You’ll hear this storyline in Seoul more often than the global triumphs of, say, Samsung or Tae Kwon Do.

Perplexed? Wondering how you missed this trend? Don’t blame yourself. After all, “Gangnam Style” is the only K-pop song most Americans know. When Girls’ Generation beat out Justin Bieber and Miley Cyrus for the first-ever YouTube Music Awards in early November, a long, awkward silence swept the audience, interspersed with clapping.

Girls’ Generation’s triumph was based on an algorithm that calculated the popularity of certain videos. One columnist later pointed out that the group’s fame on YouTube was probably helped by legions of fervent fans called “Sones,” pronounced “So-Ones,” in K-pop slang.

And sure, elite K-pop troupes may have sold out enormous venues such as Madison Square Garden in October 2011. But one music critic noticed a fair amount of empty seats, while other insiders were aware of all the free ticket giveaways.

“There are K-pop followers, sufficient to sell out major venues a few times per year, but not sufficient so that you can find much K-pop either on TV or radio or in the surviving record shops such as HMV,” says Keith Howard, a Korean music expert at London’s School of Oriental and African Studies.

Young Koreans, traveling overseas for the first time, are surprised at the lack of interest in the national music.

“I thought from the shows on Korean TV that K-pop was becoming a big thing in France,” explains Hwang Jeong-Hyon, 20, a fan from the southern coastal city of Busan who studied in that country. “They had videos of very big concerts. But when I arrived, I couldn’t really find much except on the internet. It was a little weird.”

The Korean media’s penchant for claiming that the music has charmed the world is just an internet-era way of expressing nationalism, experts tell GlobalPost. The teenage music groups are a marker of pride for a country that, coming out of decades of growth from poverty to wealth, has staked its place in the world in the last 15 years.

Whether or not it’s the Next Big Thing, instances of fans embracing K-pop overseas create prestige at home. “One could argue that European tours, for example, are less to do with making profits from the European market and much more to do with promotion through press reports back in East Asia,” he said.

So how did K-pop, with its teenage and 20-something girls dancing in bright zany costumes, get appointed as the champion of a powerhouse better known for its smart phones, televisions and semiconductors?

Korean pop has existed for decades. But the seeds for the current craze were, ironically, planted by government bureaucrats working with promotional agencies and big corporations.

It all began in 1997, when the Asian Financial Crisis crippled the South Korean economy — calling into question whether this new-rich nation would find a way to reinvigorate its growth.

In a bid to boost South Korea’s global profile and show that it could surpass traditional manufacturing, President Kim Dae Jung chose the entertainment industry as a growth engine. The government set up the Korea Creative Contents Agency and injected funding into the Korean Film Council to promote pop culture, all while urging universities to churn out the next batch of talent.

By the mid-2000s, the Korean Wave phenomenon had taken off around the region, thanks also to aggressive corporate marketing in Japan and China, and the perception for some countries that South Korea, unlike its neighbors, was a benign success story that didn’t carry the baggage of war and imperialism.

The government continues to believe that by promoting Korean pop culture, people around the world will take a favorable view of this somewhat obscure “middle power,” bringing business and tourism to the country.

The South Korean foreign ministry has tasked diplomats with promoting Korean pop culture overseas, while the Korean Tourism Organization has turned drama film sets into tourist sites for K-wave pilgrims. The government has also announced plans to help set up a “K-Pop Academy” for entertainment companies who want to train international talent. In 2012, the sports and tourism ministry even established an “advisory committee” to look for ways to sustain the Korean wave.

Still, the intense popularity of Korean bands and televisions dramas never reached far beyond Asian shores. Since the late 2000s, groups like the Wonder Girls, 2NE1, and Girls’ Generation have performed in North America as part of campaigns for stardom there. But the strategy hasn’t work out as planned.

Once thought to be a sexy four-member girl group poised for overseas success, 2NE1 put on their first American performance for the somewhat empty Prudential Center in Newark, selling less than half of its 20,000 seats in August 2012. The group also failed to sell the 6700 tickets available at the mid-sized Nokia Theatre in Los Angeles a month later.

Girls’ Generation, meanwhile, managed to boost its profile by singing on David Letterman’s "Tonight Show" in February 2012, but didn’t get much further.

Many were wondering whether K-pop, in spite of its millions of dollars in record label cash and government-backed promotions each year, had hit a worldwide plateau. That was, of course, until “Gangnam Style” became a smash through an unexpected channel, YouTube.

Psy’s YouTube video went viral in the summer of 2012. It reached 1 billion views by December of that year, turning the rapper into the superstar face of "hallyu." (Other K-pop snobs disagreed, proclaiming that Gangnam Style, which appealed mainly because of its quirky horse-galloping dance, was a separate marvel from the Korean Wave).

So far, Psy hasn’t recreated that achievement with his follow-up single, “Gentleman.” But K-pop as a whole continues to grow, even if it’s stumbled outside of Asia. Last year, South Korea’s largest K-pop label, SM Entertainment, saw its income almost double to $38 million.

In other words, the K-pop industry itself is huge, and the numbers suggest it’s growing. But for South Korea, it’s not a matter of simply churning out a profit. Money isn’t good enough. It’s a matter of building prestige and cementing global recognition.