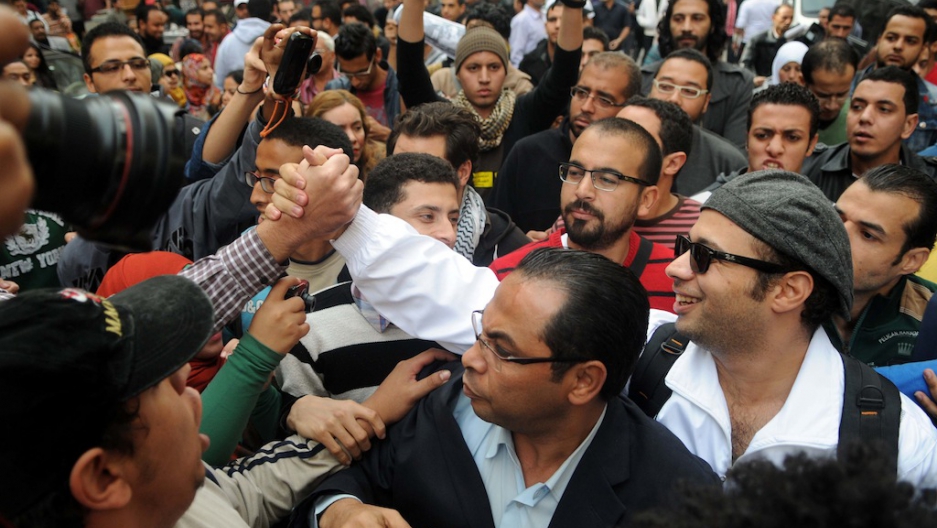 Ahmed Maher (R), co-founder of the 6 April youth movement that spearheaded Mubarak's ousting, is greeted by supporters as he hands himself in to prosecutors on Nov. 30, 2013 in Cairo.
Credit: STR
Share

Popular Egyptian activist Ahmad Maher gave himself up to authorities on Saturday after a prosecutor ordered his arrest for inciting protests amid the pervasive unrest that has racked Egypt since the military seized power on July 3 this year.

Maher is co-founder of the media savvy April 6 Youth Movement, a group that had a vital part in ousting Egypt's dictator Hosni Mubarak in 2011, and the group's supporters were on display as Maher made his way to Abdeen court.

"Down, down with military rule! I'll write on the prison wall that army rule is shameful and a betrayal!" supporters shouted, according to Reuters.

Maher's arrest follows a new protest law passed about a week ago by the military-backed interim government, which, as expected, has drawn condemnation from rights groups.

"This law will reverse the freedom to demonstrate that Egyptians seized in Jan. 2011, and risks putting that freedom, which brought about momentous change, into reverse," Stork added.

Amnesty International, another human rights group, has also expressed its concern over the new law, calling it a "serious setback that poses a grave threat to freedom of assembly and gives security forces a free rein to use excessive force, including lethal, against demonstrators."

The irony here is that the Egyptian military, which helped oust Egypt's first elected president, came to power on a wave of mass protests that railed against Islamist Mohamed Morsi's increasingly authoritative rule.