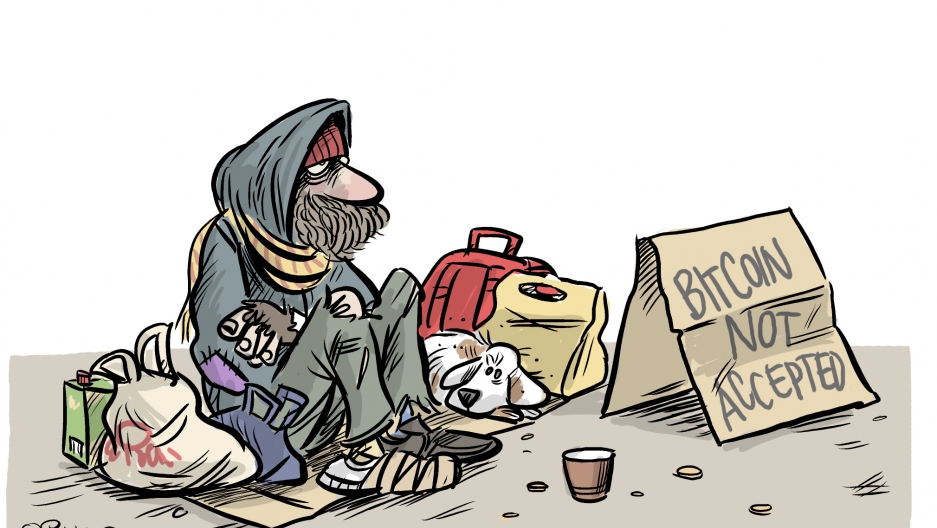 A Slovakian cartoonist shows one part of the economy that has yet to embrace Bitcoin. Bitcoins have seen a dramatic increase in value in recent weeks and have become an acceptable currency at some shops around the world, stretching from Germany to Iran.

Have a new kid on the way? Well, if you live in the UK, you're in for a major adjustment in how parental leave is handled.

Previously, fathers were entitled to a brief paternity leave after a baby's birth, while mothers could take up to a year off with varying levels of pay. Under the new British program, the year can be divided between mothers and fathers, allowing them to customize their time off to the individual situations — and even switch off.

The Guardian has more.

The US-Afghan agreement to keep American troops in Afghanistan after 2014 was dealt another setback Thursday when a NATO drone strike killed and wounded civillians. Afghan President Hamid Karzi lashed out at US officials for the attack, prompting a US military leader to apologize, The New York Times reports.

Fighters over the Pacific

The Chinese government has sent fighters out over its newly-declared East China Sea air defense zone, to monitor US and Japanese military aircraft that have flown through without providing the notification it demands, the BBC reports.

The air defense zone covers a group of islands claimed by Japan, China and Taiwan, as well as a separate submerged rock claimed by South Korea. The competing claims have been a thorny issue in Asian foreign policy much of the last year, though the new air defense zone has raised tensions.

PRI's The World has the story of a forbidden relationship in the Middle East, between two Israeli and Palestinian men. The pair of 29 year olds met online and developed a relationship that had to be kept secret not only for religious reasons, but also because of where they lived and their sexual orientation. The Israeli was even arrested for trying to secret his partner across a border checkpoint.

Thai protesters briefly entered an army headquarters on Friday in the country's capital, Bangkok. Thousands of people have taken to the street to protest rural versus urban issues in the latest manifestation of that country's eight years of on-again, off-again strife. The protesters left peacefully after a couple of hours, Reuters reports, but planned to ratchet up the pressure by targeting government buildings on Sunday.

A musician in the style of Joni MItchell?

Toronto-based folk singer Basia Bulat has been compared to Joni Mitchell — but she shakes off the suggestion. "There can only be one, she's just a genre unto herself," she says. The Canadian indie-pop sensation just released her third album, "Tall Tall Shadow" — and did a special performance for PRI's The world. See the video.

So much misunderstanding between cultures here, so I loved reporting this story of two couples whose love transcends: http://t.co/b0sKZAJCmA

Last winter, the folks in Sochi, Russia, stored up 450,000 cubic yards of snow. They were worried they wouldn't have enough snow when the Winter Olympics arrived in February. But some good news is on tap for today: the first snowfall of the season. According to AccuWeather, the city itself will likely just see a few snowflakes, but the mountains near town, the site for many of the Olympic events, could see four to eight inches.