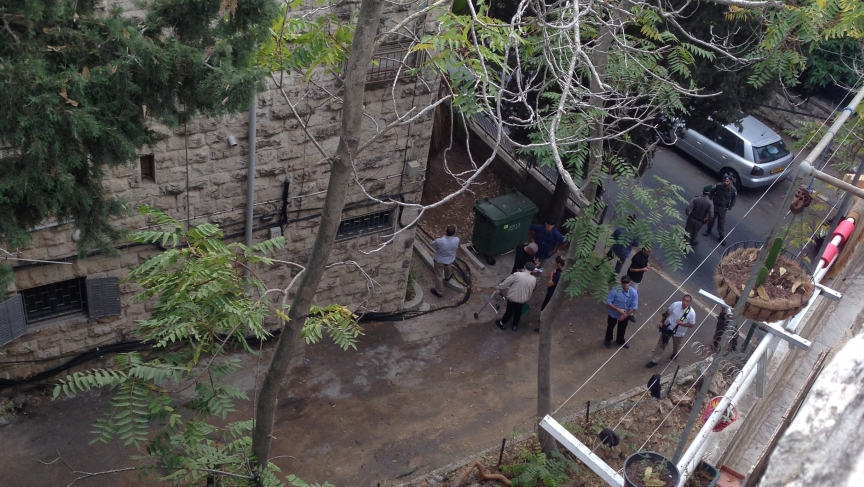 Last Saturday, I was pruning some plants on the balcony of my fourth-floor apartment in Jerusalem when I tossed a dead leaf over the ledge and saw Israeli Prime Minister Benjamin Netanyahu standing below.

I was surprised. The prime minister’s official residence is just up the street, but he usually gets around by motorcade. It was the first time I had seen him walking around the block since he took office.

What surprised me more was why he (and his son and about 15 armed guards) had stopped below my building. He was on a Sabbath stroll in the neighborhood, wearing sneakers and a black shirt, and had stopped to help an old man take out the trash.

So the man lives next door, I thought to myself. It was the old man I always see shuffling around the neighborhood with a walker, the tongues of his Velcro shoes sticking up out of place. I always felt sorry, and worried, for him. Once, I helped him cross the street, but I never struck up a conversation.

And there was Netanyahu, chatting with the man for minutes. At one point, Netanyahu asked an aide for a notebook and pen, jotted something down, and pocketed the small piece of paper.

He shook the old man’s hand, and left. And the old man shuffled back to his apartment, alone.

It took a whole week before I finally ran into the old man at the corner convenience store, and introduced myself. 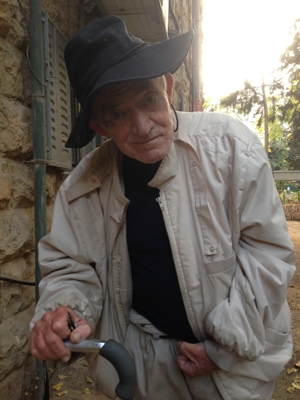 Rami Yizraeli in his Jerusalem neighborhood.

Turns out the old man is not very old at all. Rami Yizraeli is only 69-years-old. A stroke left him barely able to walk, but it left his mind sharp. Last Saturday, when he looked up to see Netanyahu standing before him, Yizraeli pounced on the unexpected one-on-one with the Israeli leader to share his greatest dream: to memorialize the 1,000 Jews, fighters and civilians, who were killed in Jerusalem in the 1948 Arab-Israeli war that led to the establishment of Israel as a state.

Many of those killed were never memorialized, Yizraeli said. Their names were not properly recorded on memorial plaques, and their families were never given proper compensation, as the Israeli government does with the families of war victims.

Working as a historian for the Ministry of Defense in the 1990s, Yizraeli scoured burial society archives, met with families and, with luck and coincidence, discovered the names of people who had been killed but never properly recorded and remembered. These included the two brothers who had arrived from Canada to fight in the war and the baker who was killed by a bomb while walking in the street. Thanks to Yizraeli’s sleuthing, numerous Israeli families began receiving government compensation.

His dream, he told Netanyahu, was to list those victims, whose names were now known, on a stone that commemorates the war and is displayed — but etched with no names — near Israel’s Supreme Court.

Netanyahu jotted down Yizraeli’s name and phone number on a piece of paper.

“Thank goodness I had remembered my new number,” Yizraeli said. And the very next morning, Netanyahu’s cabinet secretary phoned him, saying the matter was important to the government and that he was interested in implementing Yizraeli’s idea, and that they would be in touch.

His dream may come true — all because of a serendipitous encounter with a prime minister helping him take out the trash.

“My entire life has been about coincidence,” Yizraeli said to me on the bench, and smiled.