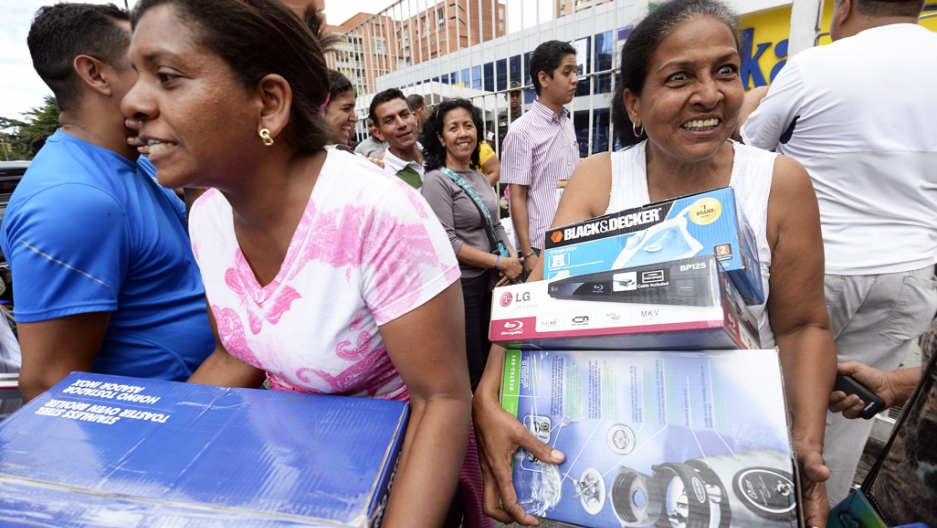 CARACAS, Venezuela — The streets of the Petare barrio are crammed with vendors who weave on foot through cars and motorcycles hawking snacks and knickknacks. Dirt piles up outside stores that sell produce, graying sofas and washing machines. The salesmen do not look pleased.

This is often an edgy neighborhood, overlooking the decaying capital of Caracas. But these days, shopkeepers here, and across this nation wracked by one of the world’s highest annual inflation rates of 54.3 percent, have to watch their backs extra closely.

The Venezuelan government has given businesses two options: “fair prices” or arrest. And that’s a rule the authorities have not refrained from enforcing.

“Everything here is imported and so we have to charge what we do,” Josef Rodriguez, 52, says of his Petare furniture store. “Of course I’m worried.”

President Nicolas Maduro, disciple of the late Hugo Chavez, last week won lawmakers’ approval of special powers to rule by decree for one year. Already, Maduro has ushered in the Law for the Control of Costs, Prices and Profits, placing a cap on companies’ permitted profit margins between 15 to 30 percent, figures he says are “fair.”

Yet even before gaining the new power, he had made a startling declaration that spooked owners of businesses small and large: Venezuela is under attack in an “economic war” being waged by the political opposition, and their corporate elite and US government backers.

The battle talk marked the start of the latest and perhaps brashest tactics by the leftist leader, whose popularity has slipped in polls just as Venezuelans prepare for local elections Dec. 8. Analysts say that vote could serve as a referendum on the presidency.

Maduro has offered scant proof of his allegations that economic warmongers are hiking up the country’s cost of living. Opposition leaders blame government policy.

The government forced retailers of electronics, furniture, clothes and many other items to slash prices, sometimes by half, or face closure and arrest.

Some obliged, and their stores drew mobs of shoppers who partook in a bargain-basement binge. Some shops were looted. Many closed their doors.

One video circulated on YouTube shows the brother of an electronics retailer in the eastern city of El Tigre crying as the National Guard arrests him and hauls him off.

“Don’t leave me with nothing,” Hakim Riffai screamed between tears.

Maduro summoned shoppers’ holiday spirit when he launched the anti-inflation campaign, announcing Christmas in Venezuela had come early. “We wanted to declare the arrival of Christmas because we want happiness for everyone,” he said on state television early in November during a visit to an event in Caracas billed as the Socialist Christmas Fair.

The head of the newly created High Commission for the People’s Defense of the Economy, Hebert Garcia, put it in plainer terms: “We have to guarantee that everybody has a plasma television and the latest-generation fridge.”

Not everybody’s buying it.

“What happened in Daka was looting,” 28-year-old Caracas engineer Samuel Akerman said of the events reported at a military-occupied electronics chain, Daka. “The government is using the private sector as scapegoat to try and shun its responsibility for the unbelievable level of shortages and inflation we currently have. It was just an electoral move to gain some cheap votes.”

On Saturday, tens of thousands marched in protests organized by opposition groups. There was a strong feeling among them that things were going from bad to worse and nothing could be done.

“I’m sad. Everyone’s jaded,” said Marisela Bernal, a 36-year-old student, who wandered around a large fountain in Caracas’ Plaza Venezuela. “We’re living through communism and there’s nothing we can do.”

A decade ago, the government imposed strict limits on the amount of dollars that could be exchanged here, hoping to combat capital flight and inflation.

However, since the country manufactures very little, importers need dollars to bring products in to sell. That demand has led to a black market where the greenback sells for 10 times the official exchange rate of 6.3 bolivars to the dollar.

“We simply can’t get dollars at the official rate so we have to go on the black market and so we have to charge accordingly,” said the manager of a major US retailer at Sambil, one of Latin America’s largest shopping malls here. “Then the government bases its calculations on the official rate! We have no chance."

Alberto Ramos, an analyst at Goldman Sachs in New York, agreed with the manager, and questioned the official exchange rate. “This is artificial math,” he said.

For the average Venezuelan, this especially hurts in the form of higher prices and shortages of even everyday goods like toilet paper.

And for entrepreneurs, it’s a nightmare doing business here.

The World Bank recently ranked Venezuela 181 of 189 countries in its Doing Business report, with No. 1 (Singapore) being the most business friendly. Venezuela falls just under Guinea-Bissau and far below Syria, Iraq and Zimbabwe.

Meanwhile, the government is fighting its perceived economic war on multiple fronts — and many wonder what new directives may come from the president’s recent decree powers.

The manager of an American swimwear chain in Sambil said that he was worried inspectors were on the way to check his prices.