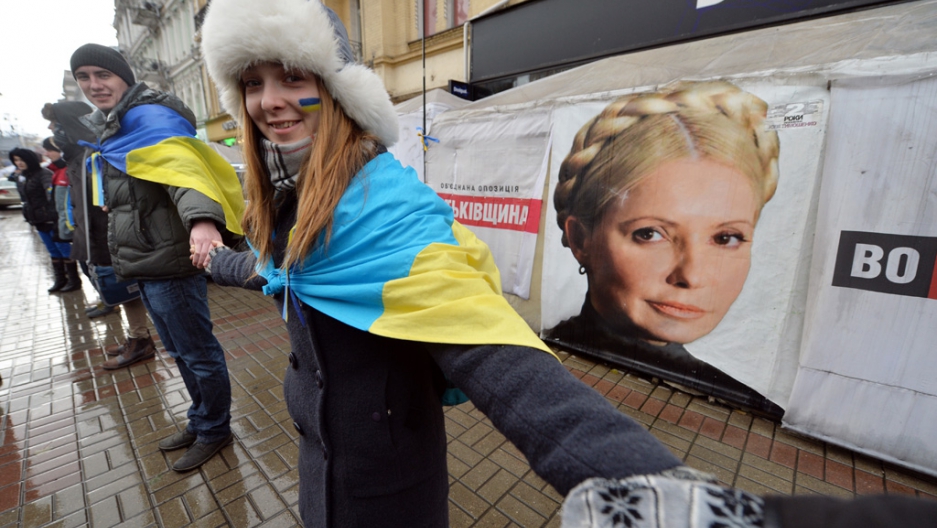 Ukrainian students stand hand-in-hand to create a human chain symbolizing the unity of Ukraine with the EU in front of the tents set up by supporters of Yulia Tymoshenko in Kiev on November 2013.
Credit: SERGEI SUPINSKY
Share

You can’t blame Ukraine for getting cold feet in its arranged marriage with the European Union, not with old flame Russia offering an attractive alternative.

So say analysts of the stalled agreement that many see as a test of Russian President Vladimir Putin’s influence in the region and his dreams of a post-Soviet “Eurasian Union.”

Gleb Pavlovsky worked for both Moscow and Kiev. He told Reuters that Russia can’t realize its new economic super power without Ukraine.

“The Eurasian Union is a very important project for Putin. Without Ukraine, he will lose all enthusiasm for it,” he said. “Without Ukraine, Putin’s project is impossible.”

Putin has publicly lamented the breakup of the Soviet Union, something obviously troubling to Europe and the United States, and is pushing for his own economic bloc in the region.

EU authorities had hoped Ukrainian President Viktor Yanukovich would sign a deal this week at the Eastern Partnership summit in Vilnius, Lithuania.

Instead, he balked, and many suggest the EU isn’t offering enough incentive while Russia is dangling cold, hard cash (and red-hot gas or oil) in front of a leader desperate to pay his bills.

The EU is offering 600 million Euros (about $815 million) to Ukraine, but Yanukovich must produce $8 billion worth of debt repayment ahead of 2015 elections, Reuters reported.

As for the Ukrainian president, he suggests this courtship is just moving too fast.

“I confirm Ukraine’s intention to sign the Association Agreement in the near future,” he said in a prepared statement, according to Agence France-Presse.

Instead, only Georgia and Moldova took initial steps.

The EU is trying to fight back, but so far only has lukewarm words of warning for Putin.

EU president Jose Manuel Barroso said Friday he won’t accept a Russian “veto” or any other meddling in its ties with other nations.

“The times of limited sovereignty are over in Europe,” he said, AFP reported.

Ukrainians themselves, at least the younger generation, are convinced Europe is the answer. Several thousand joined hands, some in a symbolic gesture across the Polish border – into Europe – as pro-EU protests spread across the country.

“This means that the majority of Ukraine’s population wants to be in Europe,” student Andrii Grytsiuk told AFP.

Young people have protested for six days hoping to sway their leader into signing and shunning Russia.

But not the masses, nor the “massives,” had any influence.

“Today, Yanukovich disgraced Ukraine in front of the entire world,” Klitschko said. “The Vilnius summit showed up Yanukovich’s complete incompatibility with European leaders when it comes to values, standards and conduct.”

Yulia Tymoshenko, who remains jailed in what EU and Western leaders have called a political hatchet job, urged students to continue their peaceful protest.

A leader of the Orange Revolution, she ran afoul of her opponents and wound up in prison.

“At stake is our life together,” she said in a statement. “Just try to defend it like adults through all the means possible.”