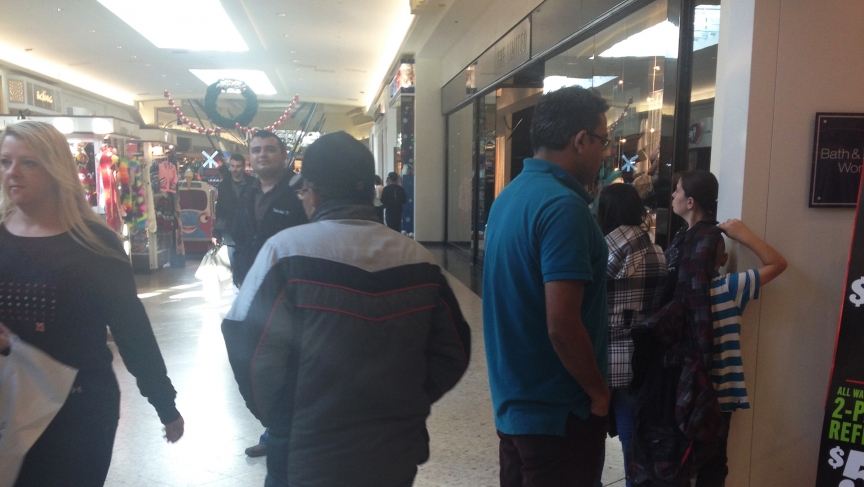 Several years ago, I experienced Black Friday for the first time — but not as a shopper. I was working at an electronics store and my manager told me to show up at work at 4 am.

I got out of bed in the middle of the night and got on the road. On my way to work I saw men, women, and children walking on the sidewalks in herds as if they were performing some holy pilgrimage.

It reminded me of the epic festival of Kumbh Mela in India, when millions of Hindus walk for miles to take one holy dip in the sacred Ganges before sunrise to rid them of their sins.

I arrived at the mall and noticed the parking lot was full of vehicles with the engines running. I saw through fogged-up windows that some people were dozing in their seats with their feet up by the windshield.

I walked into the store through the back door. It was strange being inside an empty mall, with hundreds of people waiting to get in.

It felt like some kind of battle; my boss acting like our commander, preparing her soldiers to tackle the enemy waiting to get inside the mall.

Finally my boss said, "Go ahead and open the doors." In the next minute, I saw a hundred or so people rushing in my direction.

The last time I had seen so many people running like this was when I went to the train station in Lucknow, my hometown in India.

In the next few seconds, the store was filled with more people than I thought it could possibly hold.

I stood behind the counter, and watched them scan the store, as if on some kind of mission. They weren't browsing; They were searching, going through each shelf, each aisle, every section of the store.

I tried saying hello to some of them, but they didn't bother even to look at me-their eyes were focused on something else. They wanted to be done with this store and move on to the next one.

By 10 am, the store looked like it had been looted — a wall that had been full of remote control cars now had nothing on it, aluminum shelves were bare, steel pegs were empty except for a lonely flashlight, or a laser key chain.

Black Friday reminded me of Big Tuesday in Lucknow, when hundreds of devotees, beggars, and homeless people would surround the temple and pull on each other's sleeves to get the biggest share of the sweets that were distributed in the form of a holy offering.