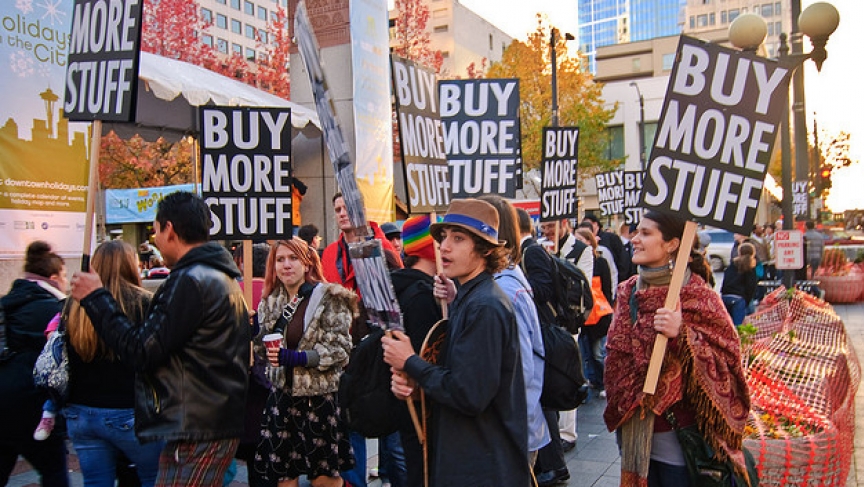 Protesters mock the consumerism that fuels the Black Friday mania.

If you're someone who lives for shopping on Black Friday, you're probably snoozing, exhausted from a pre-dawn raid.

Better you than us. Black Friday's become such an American "experience" that reporters from all over the world love to cover it. But you know what — when it comes to getting a bargain we Americans are, in general, pretty sad.

Sure, we'll wait in line for a week to save a few hundred bucks on that TV, but in other parts of the world, you go into the store, no waiting, and you haggle. Even in the big shops.

Abdelhak Karach knows a thing or two about the art of haggling. He's originally from Morocco, but he's been living and shopping in Northern Virginia for many years.

"It looks different to me compared to how we shop back home," he said. In Morocco, says Karach, you have to know where to shop and who to bargain with.

He remembers one particular holiday, haggling and getting a great price for a sheep for Eid dinner. Of course, there are occasions where bargaining is the way to go in the US. Buying a car, for example, is not for the faint of heart — that is, unless you are master haggler Karach.

"I don't know why you can bargain for cars and you can't bargain for something else," he said.

Not every country dukes it out each year at Wal-Mart, but many places have Black Fridays of their very own.

Black Friday doesn't quite translate in India, according to reporter Rhitu Chatterjee in Delhi.

"What we've seen over the last few decades, as people have gotten wealthier, consumerism has grown overall," she said.

But while general consumerism has indeed grown around the Hindu Festivals, says Chatterjee, it pales in comparison to the Black Friday frenzy she witnessed while she lived in the US.

Further east, in China, a new shopping holiday was introduced this year called Singles Day. However, the buying frenzy for Singles Day happens online, according to American-Chinese comedian Jesse Appell.

"The massive amount of people purchasing these things don't live in major cities where you have the outlet stores for your major brand," Appell said. "So you kind of have to buy online."

Mexico has it's own equivalent to Black Friday it's called Buen Fin, says journalist Franc Contreras who reports from Mexico City.

"I went to one department store and saw one man carrying out seven huge flat screen TVs — the kind that cover up your entire wall," Contreras said. "In the capital city, people were very happy to take advantage of these prices and get out there and shop, shop, shop."

And in Canada, while some folks may be slipping across the border to take advantage of American deals, the major shopping holiday is the day after Christmas, known as Boxing Day. The tradition, which is also celebrated in the UK and other parts of the Commonwealth, began as a time for people to box up old things to give away.  Now, it's the big box stores that are trying to "give away" goods at deep discounts.

"It's actually brilliant," said filmmaker Jordan Canning who lives in Toronto. "If the world made sense, the sales would happen before Christmas so we could buy nice things for the people we love, but instead they give us another excuse to spend more money at a slightly reduced price."