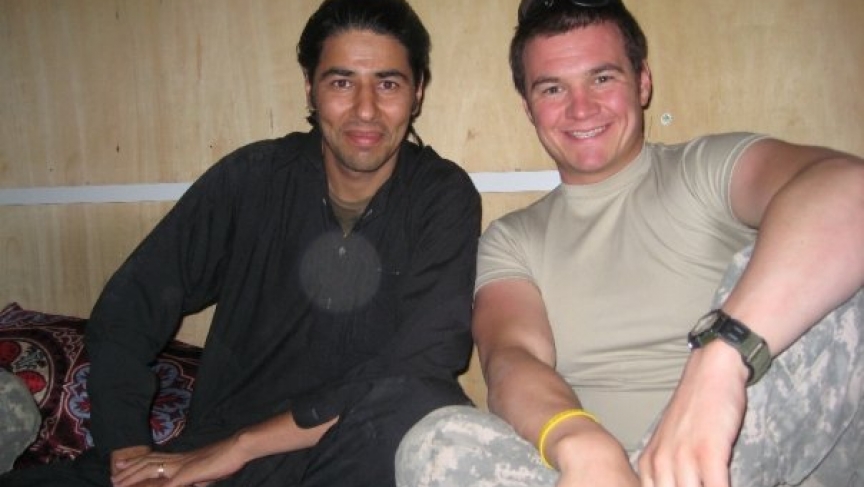 Matt Zeller and Janis Shinwari met in Afghanistan. Shinwari was an interpreter for the US army, Zeller was a first lieutenant in the army. Now they consider themselves brothers, having each saved the other's life.

A week after they met, Zeller was on patrol and his convoy was ambushed by about 45 Taliban fighters. His unit had only 15 soldiers, he says.

"About an hour into this firefight, I had run out of grenades and I was running pretty low on bullets, and I thought, well, this might be it. I might die here on the side of a hill top in a nameless village in the middle of nowhere," Zeller recalls.

Then, he says, "like out of a movie," Shinwari appeared as part of the "quick reaction force." He hopped out of the lead vehicle, jumped into the foxhole with Zeller and started shooting.

Two Taliban fighters were sneaking up on Zeller and Shinwari killed them.

"I wouldn't be sitting here talking to you today on Thanksgiving, if it wasn't for Janis's actions on that day," Zeller says. Zeller had Shinwari assigned as his own interpreter.

When Zeller's deployment was over, he left Afghanistan and promised Shinwari to help if Shinwari needed to escape Afghanistan.

In 2009, Shinwari's name appeared on a Taliban kill list. He began to get death threats. One letter addressed to him said his head would be cut off.

Shinwari was reassigned to Kabul as a precaution. Zeller kept in touch with Shinwari's commander and eventually heard that the Taliban was trying to hunt down the interpreter in Kabul. Together, the three decided it was time for Shinwari to move to the US.

In 2011, Shinwari applied for a Special Immigration Visa, a program set up by the US government to help Iraqi and Afghan interpreters whose lives were in danger move to the US. He got the visa.

But a few days before heading to the US, he was notified by the US Embassy that there was a "problem" with his visa.

That turned into many months of delay. Zeller, who had spent four years working for the CIA, started asking around among his former colleagues. He says he learned that the Taliban had called an anonymous tip line in Afghanistan and reported that Shinwari was actually working for the Taliban. That was the problem that delayed the visa.

Zeller mobilized several members of Congress to take up Shinwari's cause and, after months of back and forth with the State Department, Shinwari and his family were cleared to fly to the US.

They arrived in October and Zeller met them at the airport.

"in Afghanistan, we were not safe," says Shinwari. "My kids, they were at home all the time. We couldn't let them go out to play with the other kids. And here, my kids are playing with Matt's daughter every day. They are happy, they are free. They can go everywhere."

"I definitely think this is the first of many Thanksgivings that we're going to share together," Zeller says.