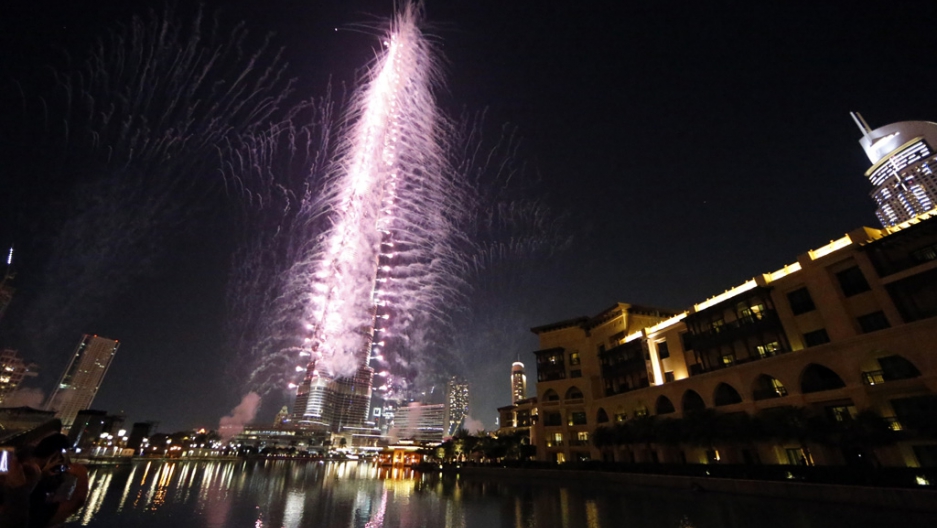 Fireworks illuminate the sky around Dubai's Burj Khalifa, the world's tallest tower, on November 27, 2013, after the Emirati city was chosen to host the World Expo 2020. The Gulf city state beat Russia's Ekaterinberg in the final round of voting to clinch a prestigious event credited with delivering a huge boost to tourism and business for its host city.
Credit: KARIM SAHIB
Share

In a celebration normally reserved for a winning Olympic bid, revelers spilled into the streets of Dubai on Wednesday after learning their city would host Expo 2020.

Fireworks and laser lights illuminated the night sky around the world’s tallest tower, the Burj Khalifa, after the announcement in Paris.

“We renew our promise to astonish the world in 2020,” Sheikh Mohammed bin Rashid al-Maktoum said in a prepared statement. “Dubai Expo2020 will breathe new life into the ancient role of the Middle East as a melting pot for cultures and creativity.”

Dubai won 116 votes to 47 for Ekaterinberg, Russia, in the final round of voting.

Sao Paulo and Izmir, Turkey, were the other finalists voted on by 168 International Exhibitions Bureau members.

According to Xinhua news agency, Dubai is the first Middle Eastern nation to host in the 85-year history of the Bureau International des Expositions (BIE).

“I feel so proud, my home town is really the ideal host for the world as so many people from different countries live here,” a resident named Ahmed told the news service.

Dubai projects 277 jobs and $22.9 billion worth of revenue from hosting the event, which is organized around a theme of “Connecting Minds, Creating the Future.”

Organizers said Expo 2020 will be held at Dubai Trade Center, a 438-hectare site on the southwestern edge of Dubai.

Between Abu Dhabi and Dubai, the site is located next to the new Al Maktoum International Airport and also located in close proximity to Jebel Ali Port, the third busiest port in the world.

The South Korean city of Yeosu ended Expo 2012 in August, meaning Milan, Italy, is on the clock to host Expo 2015.