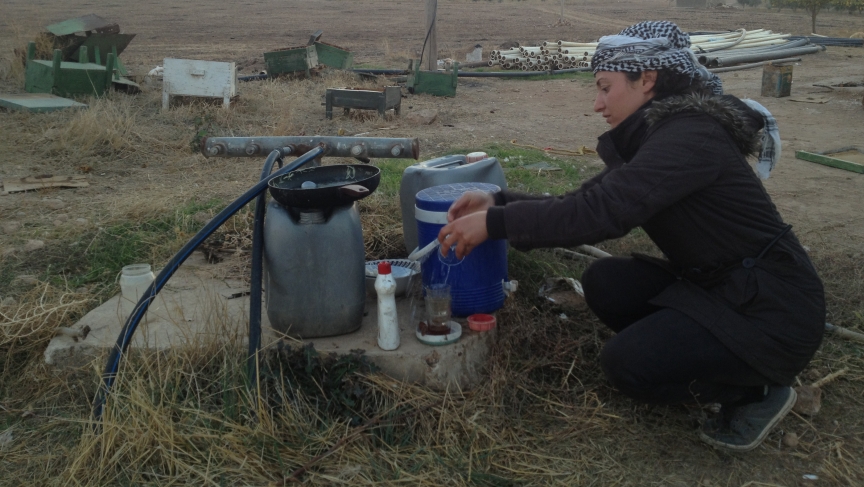 Nooda cleans cups while on duty at an advanced YPG position.

It’s early evening at a farmhouse near Ras al-Ayn, Syria. The generator just ran out of fuel. The walkie-talkie starts buzzing and Sheelan grabs it in the pitch black darkness of the living room. On the other end of the static is Nooda, who’s on night duty with three other fighters.

Nothing unusual here about two women in arms talking. There are nine women out of the 25 or so fighters positioned at this strategic outpost.

The fighters all moved here three weeks ago when the YPG, the Kurdish militia fighting in Syria, forced radical Islamist groups to retreat from about two dozen villages.

In the next room, a man and a woman chat over a huge pan of boiling oil. They’re fixing dinner: French fries, canned hummus and pickles.

Nujin, 20, says men and women share all the work, whether in the kitchen or on the battlefield. She describes the schedule for the day: Breakfast at seven, lunch at noon, dinner around six — a regimented lifestyle, just like in a regular army.

Kurdish militants say they have more in common with guerrilla fighters in Latin America than with most other rebel groups in Syria. Men and women fighting side by side is nothing new in this largely secular community.

That’s in part because the Kurds’ struggle isn’t new. They’ve spent decades fighting for their rights across the region — in Iraq, Turkey and Syria. Even though she’s Syrian, Berwalat has been part of the Kurdish guerrilla movement in Turkey for 17 years.

She says the cause is worth the sacrifice she makes as a woman, then breaks into laughter when asked if she’d like to have a family one day.

“This question ... about why we don’t have families, everyone is intrigued by it. Everyone wants to know how we can live together without sexual relationships, without kids, but for us it’s something normal, we’re used to it," she says.

"We avoid relationships — even with our own families — because that way we stay steady in our head, and committed to our cause. It’s a sacrifice we make for freedom.”

Freedom for the Kurds, and for women, as well. The al-Qaeda-inspired groups they are fighting, she says, want to take that freedom away.

“The ideology of radical Islam is mostly designed to oppress women. In this system, women are always at the bottom. Kurdish women today have a choice between living a life of slavery or taking up arms. So, of course, I’m glad to see so many of them joining us,” she says.

Among the new recruits is Rossiar, a soft-spoken woman with a shy smile, plucked eyebrows and a baseball cap.

Rossiar had no military background before joining the militia. She graduated from an art institute, then volunteered for a few months as a Kurdish language teacher.

But she signed up after an al-Qaeda-affiliated militia, Jabhat al Nusra, overran a strategic border crossing with Turkey in 2012. The 26-year-old changed her name and left her old life behind.

“I’m a Muslim too,” she says, “but I have nothing in common with those people.”

Rossiar’s father lives on a farm about two hours away in the countryside. None of his children had taken up arms before. He says he was baffled when he heard the news.

“It was a shock for us because she didn’t tell anyone about it. When we heard she joined the YPG, she was already gone," he says. "She should have told us about it, but she didn’t tell me, her mother or her brothers. How could she do this without telling us?”

During a visit home, he urged her to quit the militia, but she didn’t even spend the night.

He says he has come to terms with her decision, but still worries about her safety. He asked where his daughter was staying these days, and if she’s in harm’s way.

Rossiar says the guerrilla lifestyle might seem rough from the outside, but it’s thrilling and for a good cause.

“Imagine the jihadists,” Rossiar tells another woman. “They know we’re fighting here ... and they must be so pissed off to be defeated by a bunch a girls.”