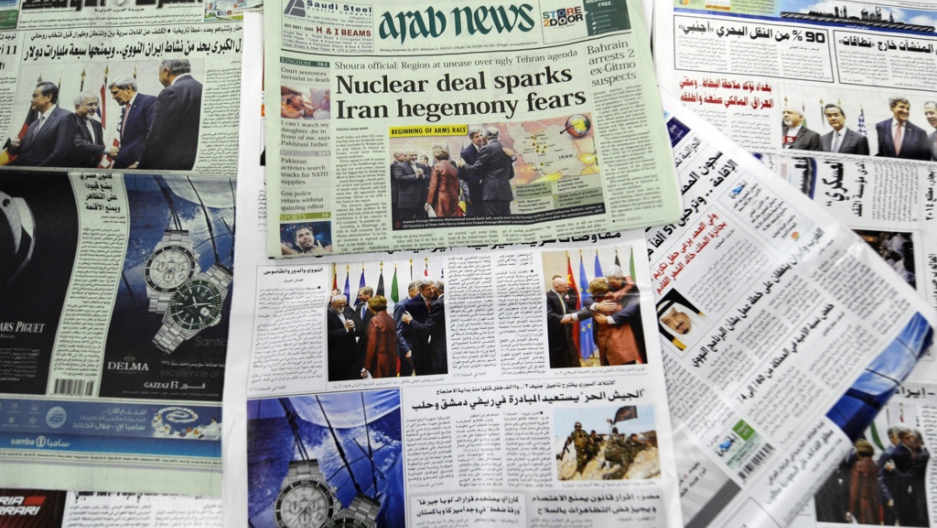 NEW YORK — As the prospect of a long-term deal over Iran’s nuclear program has gone from remote to possible, Middle East leaders are demonstrating once again why their region remains a graveyard of diplomatic initiatives — and thus the most violent and hateful corner of our planet.

The interim deal reached by Iran and international negotiators in Geneva this weekend is incomplete and there are genuine reasons its terms must be scrutinized and adherence to them very carefully enforced.

Broadly speaking, Iran is required over the next six months to stop producing highly enriched uranium and to dilute its current enriched stockpile to below bomb-grade levels. In exchange, as a confidence-building measure, some economic sanctions on Iran will be lessened — though most will remain in place during this trial period. Iran also must halt construction of a troubling heavy-water reactor at Arak — capable of producing plutonium, the other material a nuclear weapon can be based upon.

So it’s fair to ask whether Iran will live up to these terms given its history of deceit on nuclear matters, or whether this is merely a stalling tactic to give Iran’s nuclear scientists time to create a useable warhead.

But the tone of outright dismissal adopted in some places — in Israel and Saudi Arabia in particular, but also in that hive of wisdom, the United States Congress — is so complete and determined that one has to wonder whether it is the concept of peace or merely the particular first steps taken here that are so offensive.

“A historic mistake,” says Israeli Prime Minister Benjamin Netanyahu, a man who should know something about such things since he almost single-handedly derailed the Oslo peace talks with the Palestinians a decade ago.

The Saudis have been more circumspect — or opaque, perhaps, would be a better term. No official pronouncement or klieg-lighted predictions of doom have been reported in Riyadh.

But over the past several months, the kingdom’s emissaries have made clear their unhappiness with the general drift of US policy in the Middle East: that is, President Barack Obama’s determination to extract the US from its deep and entangled position in the region’s political weeds.

The Saudi and Israeli complaint lists are similar. Both cheered the tighter US sanctions that brought Iran to the negotiating table, but Israel and Saudi Arabia misjudged what would flow from the sanctions. They seemed to assume Iran would simply redouble its nuclear arms research, forcing Obama to take military action, as he has repeatedly warned he would, if Iran moved toward weaponizing its nuclear capabilities.

As in Syria, however, Obama has chosen not to embroil the US military in yet another Mideast war.

But unlike Syria, in Iran’s new President Hassan Rouhani, Washington has found for the first time a party willing to sit down and make concessions that will be subject to clear and public verification.

The sudden prospect of peace is disturbing the calculus among both US allies.

The previous Iranian regime, led by the Shia chauvinist and anti-Semite Mahmoud Ahmadinejad, made it very difficult to ask Israel to have faith in a negotiated solution.

For Sunni Muslim Saudi Arabia, unrest in nearby Bahrain, with its Shia majority, underscored the perception of a Shia threat to the whole region. The fact that the US flirted with support for Bahrain’s pro-democracy movement deeply shook the Saudi monarchy.

The Israeli government position — that Rouhani is just a wolf in sheep’s clothing — may seem reasonable for now. But not allowing the US and its so-called P5+1 allies to test the theory, and potentially avoid war, by holding Iran to its new nuclear commitments is unreasonable.

On the Saudi side, a deeper game of regional influence is in play. The Saudis, keepers of Islam’s two holiest shrines, view themselves as the true leaders of the Sunni Arab world.

With Iran dominating the northern shores of the Persian Gulf, and the outcome of the ill-conceived US war in Iraq leaving Baghdad country in the hands of Iran’s allies in Baghdad, the Saudis fear more than ever that Iran will come to dominate the region.

Already Saudi and Iranian operatives vie for influence against each other in the Palestinian Territories, Syria, Lebanon, Iraq, in Egypt’s roiling streets, and particularly in Bahrain. More than ever, Iran — in Saudi eyes — is the Great Satan.

Finally, both Israel and Saudi Arabia, to some extent, also fear abandonment by the US.

The withdrawal from Iraq (and its lapse into a Shia-led zone of unrest), the decision not to intervene in Syria, and talk of a “pivot” to Asia threaten to undermine Israeli and Saudi influence on America’s diplomatic agenda.

So, too, for Saudi Arabia, do the shale gas and tight oil booms in the US heartland.

Add the longer-term prospect of an improving US relationship with Iran — which, after all, has a long pre-revolutionary history of partnership with Washington, and whose large crude reserves will invariably bring global oil prices down, unless Saudi Arabia cuts back its own production. This gives rise to bleak scenarios in the Saudi royal mind and feeds into fear of isolation so deeply rooted in Jewish history.

But what, realistically, is the alternative to pursuing negotiations? Here Israelis and Saudis speak with equal vagueness in the language of military options and “lines in the sand.” Israel has reiterated it will not permit a nuclear-armed Iran. As with its own large nuclear arsenal, Israel refuses to discuss details.

In fact, most experts for years have regarded military options as unrealistic, and more punitive than useful, in terms of ending Iran’s ambitions. Time and again, classified US war games on this scenario suggest enormous risks of escalation plus energy disruption that would throw the world into a new and deep recession.

This is what zero-sum logic portends.

Given the history of such things in the Middle East, and the propensity for both the Israelis and Saudis to make mischief, it is quite possible the current agreement will come undone.

But to publicly hope for the failure of peace talks that have only taken their first step is to abandon any pretense that there is a desirable outcome other than war. This goes beyond “realpolitik.” This is deep, dangerous cynicism.

In any other region, this would raise eyebrows.

After all, the Israelis have been saying, often with the CIA’s quick confirmation, that Iran is two years away from a nuclear weapon since at least 1997. And the Saudis understand that with every fracked well in North Dakota, every barrel pumped in Brazil and every small improvement in fuel efficiency, their own influence is draining away.

No wonder they want action now.