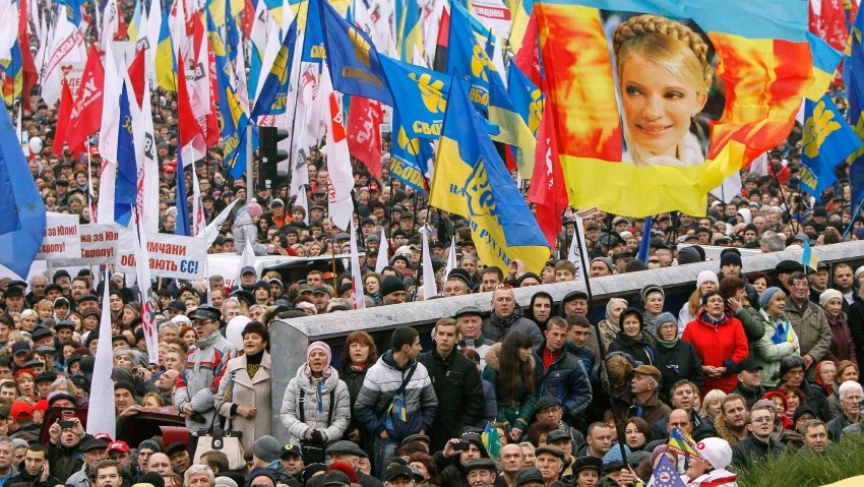 Up to a hundred thousand people took to the streets of Kiev, Ukraine (11/24/2013) to protest the government's decision to withdraw from talks about a possible trade deal with the European Union. The protest was called by imprisoned opposition politician Yulia Tymoshenko, shown here on a flag.

Many thousands of Ukrainians took to the streets on Sunday in protest. They want their country to join the European Union, but their president says "no," at least for the moment.

"Our young people who are protesting now, they consider themselves to be Europeans and they just want to go in this direction," says Nina Kuryata, an editor with the BBC's Ukrainian service.

Last week, Ukraine's President Viktor Yanukovych abruptly stopped the process of moving his country toward EU membership. He had planned on signing the documents at the end of an EU summit in Lithuania later this month. So what happened?

"The president says he didn't have enough financial support from the EU," explains the BBC's Kuryata, "and on the other hand, Russia pressed Ukraine not to sign the agreement."

Russia's President Vladimir Putin is firmly opposed to Ukraine joining the EU, arguing that free trade between the two would pose a threat to Russia's economy. He argues that European goods flowing into Ukraine would make their way into Russia with virtually no tariffs to protect Russian manufacturers.

And Russia wields great economic influence over Ukraine. For example, it could choose to impose tighter restrictions on Russian natural gas deliveries to Ukraine, which the country depends on for things like heat during the the winter.

"The main tool is Russian gas because Ukraine's industry very much depends on it," says Kuryata. "And the other one is the Russian market, because Russia can ban different goods from Ukraine, like chocolate, cheese and milk products, so the trade wars are being waged constantly."

Ukraine's president says he will still go to the summit in Lithuania, but just to set up the conditions for further negotiations with the EU. This time, he wants the negotiations to include Russia, as well.

"I don't think the European side likes that," says Kuryata, "because Europe doesn't need Russia in EU-Ukraine negotiations."

Protests in Kiev have been growing and protesters vow to continue. The demonstrations are the biggest since the  pro-democracy Orange Revolution in 2004, which brought down the government. On Monday, imprisoned former Prime Minister Yulia Tymoshenko, one of the leaders of the Orange Revolution, started a hunger strike in protest.

How much more tense can it get in Ukraine over this issue? Kuryata says "Nobody knows, but this is definitely a play on nerves because the doors for the EU are not yet closed for Ukraine, they are still open."

Ukraine's president, she notes, said he is sure the country has a European future. "So the main message is, we will be in Europe, but not now."