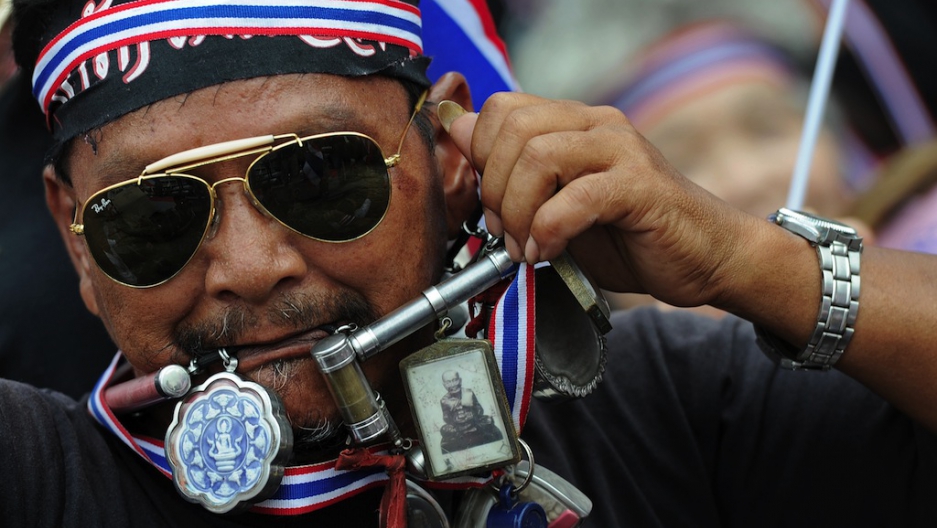 BANGKOK — By midnight, protesters weary from invading Thailand’s Finance Ministry were sprawled on its polished tile floors. Those still coming down from their adrenaline highs chatted in whispers. But most slept off the day’s raid: in chairs beneath the ministerial seal, on manicured grass or curled up beneath giant statues of elephants.

These scenes should be extraordinary. But in Thailand — defined in recent years by its unruly street politics — the images of slumber parties in seats of power have become familiar.

From a central encampment in Bangkok’s historic quarter, filled with more than 100,000 people, an anti-government movement has dispatched crowds to occupy the ministries of foreign affairs, finance, tourism and more. Their immediate goal: ousting the elected prime minister and her ruling party, which they accuse of everything from ineptitude to treason.

Their protest stylings evoke a freedom march. They are unarmed, and boast of protesting peacefully. There are even acoustic sing-a-longs.

But their rhetoric suggests the protesters are actually fighting for less democracy, not more of it.

“We don’t want any new elections. We’ve tried to be a democracy for 80 years,” said Sutti Keratisataen, a 64-year-old dentist encamped at Thailand’s Ministry of Foreign Affairs. “The pygmies in Guinea have their system. The Chinese have their system. Americans have their system ... people of the world need to accept we need our own system too.”

To Thailand’s current premier, he proposed a solution borrowed from America’s past: “Look at Nixon. He quit! Here, they just ignore us.”

This uprising is just the latest in a series of attempts to dismantle a powerful political network helmed by the family of the current premier. She is 46-year-old Yingluck Shinawatra. Her family nickname is “Boo,” which is Thai for crab, and she is the nation’s first female prime minister.

She is also the protesters’ object of disdain. Thailand’s ministries are now adorned in crude signs that read, in Thai, “Stupid b*tch!” or variations such as “Stupid Crab B*tch Water Buffalo Face.”

There is a reason these forces have soured on elections: They appear unable to win them.

Thailand in the 21st century has been defined by a series of sweeping victories by the Shinawatra camp — which has proven resilient despite military ouster and a wave of court orders to disband their parties. Their current Pheu Thai party (translation: “For Thais”) soundly won the last general election in 2011.

Looming large over Yingluck’s premiership is her older brother, the globetrotting tycoon Thaksin Shinawatra, who was premier from 2001 until his 2006 ouster via army coup. Now based in Dubai, Thaksin lives in exile to escape corruption charges. The degree to which he influences the current ruling party from afar is disputed. His enemies consider him a de facto ruler. The party insists he’s only offering advice.

“This question, no matter how I answer it, you’ll find it hard to believe me,” said Varathep Ratanakorn, a minister heading the premier’s office. “The former premier has the right to make recommendations. But at the end of the day, it is she who decides.” He added: “It’s difficult to tell you how often the brother and the sister communicate.”

The Shinawatra clan has risen in recent decades from Thailand’s rural merchant class. That ascent has brought them into collision with members of Thailand’s old guard: top army brass, patrician families and defenders of Thailand’s royal palace, which directly ruled the nation until 1932.

The rank-and-file opposition to the Shinawatra siblings draws, in general terms, from the urban middle and upper classes. They prefer the Democrat Party — Thailand’s oldest — and the protests are led by firebrand loyalist named Suthep Thaugsuban. If victorious, he told the Thai press, he will push for an ambiguously defined “people’s government.”

The current Shinawatra backlash movement is perhaps the largest yet. The first wave preceded the 2006 coup and a major 2008 push infamously crescendoed with protesters shutting down Bangkok’s chief international airport. But crowds this time have turned out major numbers: more than 100,000 by all accounts, with the military estimating 150,000 and protest chieftains dubiously proclaiming 1 million.

Protesters have cast themselves as defenders of a nation in the grip of a corrupt, mismanaging and dangerously populist faction that will bankrupt the country for their own benefit. “They use our taxes only to enrich themselves. It’s a mystery how they divvy up our money,” said 37-year-old protester Jakmaruay Kirdkul. “This premier is doing it all for her big brother. Is there any country in the world like this?”

Echoing stage rhetoric, a 48-year-old protester named Charoenchai encamped at the Ministry of Foreign Affairs described the elected government as “tyrants” and “dictators.”
“No country would want a dictatorship,” he said. “Even if came from an election. Even ten more elections won’t solve this problem.”

A post-midnight tour through two occupied ministries by GlobalPost turned up no sticks or rods — a staple of past protests. The only notable scuffle broke out Monday when a Thai-speaking German photographer — targeted in protester-run Facebook hate campaign alleging him of bias — was singled out and punched.

But at the occupied ministries, protesters have so far resisted shattering windows or destroying property. This is a point of pride for many who compare themselves favorably to their rivals, a Shinawatra-aligned street movement called the Red Shirts. That faction’s months-long occupation of Bangkok’s glitzy downtown in 2010 — designed to force new elections, not halt them — ended in a guns-blazing army crackdown that left 90 protestors dead.

Key leaders of the Democrat Party — which held power at that time — have been subsequently charged with murder in connection to those deaths. Current anti-Shinawatra protest leader Suthep, and former Prime Minister Abhisit Vejjajiva, are among them.

In a Q&A several weeks before the ongoing protest uprising, the Democrat Party’s former deputy leader Korn Chatikavanij, who recently resigned to join the protest movement, told GlobalPost that his faction was inherently opposed to returning to power through chaos and violence.

He also acknowledged that havoc can lead to success. “Do you think the Pheu Thai strategy ... of causing absolute havoc has been a successful political strategy? It has been successful. Also, the strategy of dividing the Thai people so that there’s mutual hatred and constant division has been a successful strategy. As long as their side numbers more than our side ... (but) those are just not strategies in the DNA of the Democrat Party.”

But unarmed raids on ministries — however weaponless — are being portrayed as something akin to absolute havoc by the ruling party. In a New York Times interview on Nov. 26, a Pheu Thai parliamentarian named Korkaew Pikulthong gave the invasions a much more serious label. “Occupying government property,” he said, “cannot be considered anything by insurrection.”