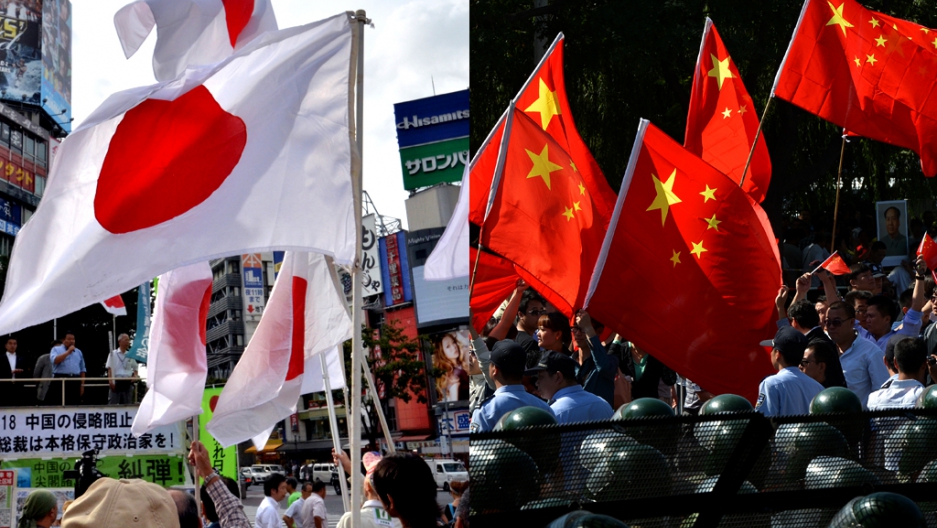 After decades of peace, could China and Japan be on the brink of war?

Both China and Japan have long-held claims to the Japanese-administered islands — known as Diaoyu in China and Senkaku in Japan. Tensions have intensified over the past year, and observers fear that a political or military misstep could rapidly escalate.

Over the weekend, China announced an air defense zone over the East China Sea, encompassing the disputed islands. The new policy would require airlines to give Chinese authorities their flight plans before entering the airspace designated by China.

Japan's Prime Minister Shinzo Abe said the new policy "escalates the situation and could lead to an unexpected occurrence of accidents in the airspace."

On Tuesday, The Wall Street Journal reported that two US B-52 bombers flew over the disputed islands, "in a direct challenge" to the air defense zone, citing US officials.

Over the past year, Chinese ships have been sailing in and out of Japanese territorial waters, and Japan has scrambled fighter jets in response to Chinese military aircraft flying into Japanese air space with alarming frequency.

In recent weeks, China accused Japan of “dangerous provocation” after a Japanese naval and air patrol got too close to a Chinese live ammunition drill. Beijing was left fuming after Japan placed missiles on the islands as part of a huge military drill.

To better understand the reasons for the dispute over the islands and where it could be headed, GlobalPost interviewed Dr. John Lee, an expert on energy security at the University of Sydney, Gary Li, a senior analyst for maritime information provider IHS Maritime in Beijing, and Robert Daly, director of the Kissinger Institute on China and the United States at the Woodrow Wilson Center.

Who is the rightful owner of the Diaoyu/Senkaku Islands?

John Lee: It depends on how far back in history we want to go. The Chinese claims go back to the Qing Dynasty, which eventually fell in 1912. The Japanese seized the Chinese-controlled islands in the 1890s, surrendered them to American control after their defeat in WWII, and were then subsequently granted administration of the islands by the Americans. Note that China was not particularly interested in the islands until the late 1960s.

Gary Li: As with all disputed territories, there are different narratives and opinions based on history, sense of nationhood, pride, and above all, politics. It is therefore difficult for third parties to pass judgment on such disputes.

Robert Daly: A dispassionate look at the evidence does not indicate that either side should clearly rule the islands for all eternity. What do “should” or “rightful” mean, after all? What is clear is that this conflict will not be solved based on historical and legal arguments. Sovereignty will be worked out through future actions and attitudes, not by appeals to the past.

Why are these islands so important to China and Japan?

John Lee: There are unknown quantities of natural resources beneath the sea beds of the exclusive economic zone of these islands. But the estimates are modest and the dispute has more to do with nationalism and geo-strategy than resources. On geo-strategy, ownership of the islands would offer a pathway to the Western Pacific. In China’s case, if the logic of its ownership of these islands were accepted, it would pave the way for it to apply the same logic to its claims in the South China Sea.

Gary Li: The one topic that is often covered by the media is that of energy. However, for China and Japan it goes far deeper than this. For China, the territorial integrity of the nation is paramount to the government’s legitimacy and thus something that cannot be compromised. The historical enmities between China and Japan over the latter’s war in China fans this dispute more so than say, the South China Sea. For Japan, a resurgent sense of nationalism coupled with a suspicion of a rising China is driving a confrontational attitude. This is also seen in the militarization of Japan in recent years and debates on revising the pacifist constitution. Both sides have to answer to an increasingly nationalist population that makes backtracking difficult.

Robert Daly: National pride. In Beijing and Tokyo, the domestic political price of backing down now far exceeds the value of the islands themselves.

How would you rate the risk of the current war of words between Beijing and Tokyo escalating into a full-blown military conflict between the two countries?

John Lee: The prospect of a planned war between these two countries is slight. But the prospect of an unintended escalation, stemming from an incident at sea is significant. Note that Japan and China have very poor ‘hotlines’ between the two countries, making de-escalation difficult. Also, in the event of an at-sea incident, it is becoming more difficult for both sides to back down given the increase in nationalistic fervor against the other country.

Gary Li: This is relatively unlikely, though the escalation pathways would be faster than other regional territorial disputes due to the reasons stated above. The usage of coast guard vessels in the dispute so far is an indication of a wish to adhere to international law … while diplomatic channels are still open.

Robert Daly: Real, but low and getting lower, at least this week.

Where does the United States stand in this dispute?

John Lee: The United States' position is that while it does not take sides on who actually owns the islands, it will be obligated through its treaty with Japan to come to Tokyo’s military aid if needed.

Gary Li: The United States is in a difficult position. Over the years we have seen a rising China and an overstretched United States resulting in a lack of confidence in Japan on the dependability of US military support. This is the primary reason for the gradual militarization of Japan, which currently has one of the most capable and advanced armed forces in the APAC region. It is also difficult for the United States to directly intervene in the diplomatic debate between the two countries as China does not consider this an issue that concerns the US.

Robert Daly: The United States takes no position on the final sovereignty question, but has stated repeatedly that the Diaoyu/Senkakus are covered by its mutual defense treaty with Japan.

Given the historical animosities between China and Japan, do you think it is possible for the two sides to resolve their differences over the islands in a peaceful manner?

John Lee: A peaceful resolution will need US involvement for several reasons. First, the United States is a senior ally of Japan and has some capacity to restrain Tokyo. The US also has far more connections with the CCP (Chinese Communist Party) and PLA (People’s Liberation Army), which will be needed to deescalate any incident. Second, China would be unlikely to contemplate a war with Japan over the islands if it genuinely believed that the US would come to Japan’s aid — at least in the foreseeable future where its military capacity vis-à-vis the US is still weak. Third, the United States is the only player that is powerful enough to force both sides to the negotiating table, although the Chinese will resist that pressure.

Gary Li: Despite historical issues, China has always displayed a remarkable level of pragmatism in its foreign relations. Sino-Japanese relations were exceptionally good during the 70s and 80s, and China opened its doors to the US during the height of the Cold War. Whether it is strategic expediency or a change of heart, Chinese foreign policy has nevertheless displayed an ability to keep dialogue open and attempt to reach bilateral ‘win-wins.’ Diplomacy aside, there are very good economic reasons for both sides to resolve this issue also. Japanese exports to China was around $145 billion in 2012, and it is set to grow. This shows that anti-Japanese sentiment within China does not have a lasting effect on trade. Most Chinese are happy to continue buying Japanese products even if they were unhappy about the island disputes. Any severe deterioration in this trade would also have a large impact on the region as a whole. This is not ideal for a Chinese economy that is attempting to grow amid a worldwide recession.

Robert Daly: Of course it’s possible. It will require a cooling off period, or perhaps a period of acclimatization to the new normal will suffice. Then it will require patient, creative diplomacy based on the recognition of shared interests between both countries.