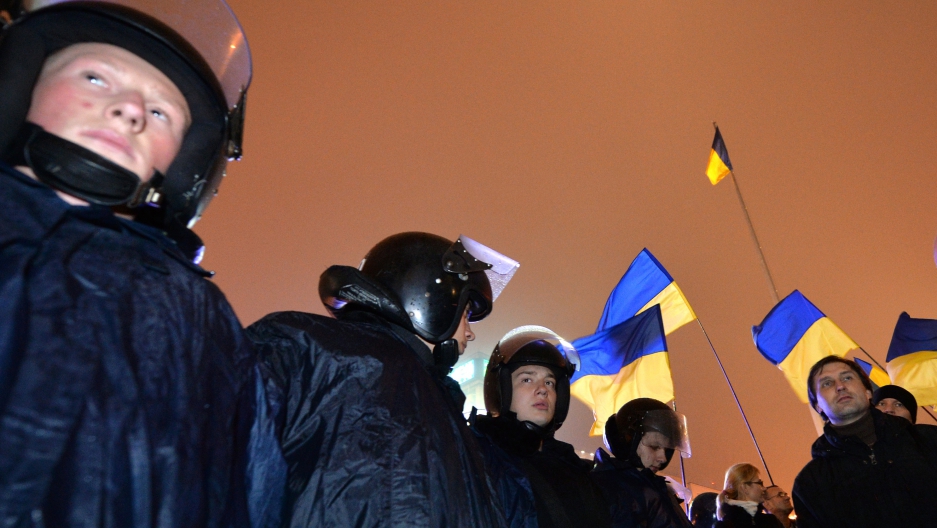 Riot police at at pro-European protest. Ukraine says it won't sign landmark agreements with the EU this week. One condition would have been protecting free speech.
Credit: Sergei Supinsky
Share

KYIV, Ukraine — Watchdog groups here are warning that the consolidation of media in the hands of a few of the country’s wealthiest businessmen connected to President Viktor Yanukovych is stifling free speech and depressing media pluralism.

They also say a so-called black PR campaign is damaging the reputations of the most influential journalists and independent news outlets, and that the two efforts are part of a single grand scheme.

Experts blame the government, which they say is concerned about criticism ahead of a presidential election in 2015, when Yanukovych will attempt to solidify his grip on power.

Taras Berezovets, director of the political consultancy Berta Communications, says efforts are being made behind closed doors to exert control over news cycles.

“In the next months we will see this campaign escalating,” he says.

That will include “cleaning up” publications already under official influence and implementing stricter editorial policies at others recently acquired by government-friendly owners, says Natalya Ligacheva, editor-in-chief of Kyiv-based media watchdog Telekritika.

“By 2015, almost all influential media in Ukraine will have been made to be loyal to Yanukovych’s government,” she says.

As a result, journalists are exiting publications en masse.

UMH group, which owns both titles as well as some 50 more internet, television and radio brands, said in a statement that the decision by Korrespondent chief editor Vitaliy Sych to resign after more than a decade at the magazine was made by “mutual agreement.”

However, Oksana Romaniuk, director of media watchdog Institute of Mass Information in Kyiv, believes Sych was pressured out because he’d refused to adhere to the new management’s editorial policy changes, which limit which topics journalists may cover.

“I don’t rule out that they [UMH management] tried to introduce the same editorial policy [as Forbes Ukraine] in Korrespondent,” she says.

Forbes Ukraine journalists were told they weren’t to pursue stories about lawmakers from Yanukovych’s ruling Party of Regions, she adds, nor were they allowed to investigate the shady dealings of a leading official, Deputy Prime Minister Serhiy Arbuzov, a previously approved project.

Members of the Ukrainian civic group Stop Censorship!, of which Romaniuk is a member, reported that the magazine’s new editorial policy allows just two politics stories per week on its website, and none about the Party of Regions.

“The blacklist of forbidden topics published by Forbes Ukraine ex-journalists shows that the Ukrainian authorities are afraid of being criticized, and the new management of the mass media holding UMH will attempt to remove any criticism from the mass media it controls,” Romaniuk wrote in an op-ed for the Kyiv Post newspaper.

The resignations came days after an estimated $340 million deal to sell 99.9 percent of UMH group to East European Petrol and Energy Company, or VETEK, owned by 28-year-old Serhiy Kurchenko. His fortune is estimated at $400 million.

“According to the information I get, he is just a person who has been made the public face, a front for other people who are well known but they do not want to go public with this business,” he told journalists in June after the UMH group deal was announced.

Kurchenko was relatively unknown little more than a year ago, until Forbes Ukraine profiled his meteoric rise to oligarch status after he snatched up the Odessa Oil Refinery, Kharkiv Metalist football club and other key assets along the way.

The magazine’s investigation highlighted his ties to Yanukovych and a close-knit group of confidants, commonly known as “the Family,” that includes Arbuzov.

Arbuzov himself is widely believed to stand behind a number of mainstream media, notably Kapital business daily and the BTB TV channel.

Kurchenko, who said he plans to invest $100 million in the UMH group, promised to preserve its publications’ editorial independence, including that of Forbes Ukraine.

“All of our foreign licensees are required to adhere to the same high editorial standards and guidelines that Forbes embraces,” she said.

Ukraine’s media campaign is taking place against the backdrop of the government’s decision to abandon landmark agreements it was expected to sign with the European Union at an EU summit together with other members of its Eastern Partnership program in Vilnius, Lithuania, later this week.

The deals promised to pull Ukraine closer toward Europe, which Russia strenuously opposed with economic and political pressure aimed at keeping Kyiv in its orbit.

The main stumbling block for Ukraine appeared to be the EU’s pressure to address the political persecution of opposition figures, especially the demand to release jailed former Prime Minister Yulia Tymoshenko. But the 28-member bloc also insisted that Kyiv deal with human rights issues, including free speech.

Earlier this month, the non-profit Internews Ukraine reported that the country had fallen to fourth place in press freedom among Eastern Partnership countries, behind Moldova, Georgia and Armenia.

Romaniuk, the Institute of Mass Information director, is the latest cybercrime victim. Her computer was hacked last month, which she noticed after she received an email from the address ukrkryvda@gmail.com that read: “Wait until tomorrow. You will want to drown yourself.”

The next day, Ukrainska Kryvda (Ukrainian Lies), a website that media experts believe is connected to the Family — and behind smear campaigns that target prominent Ukrainian journalists and civic activists — published a story alleging that she had stolen donor money from her organization.

The article also directed readers to RomaniukOnline.com, where the contents of her home computer were available for viewing and downloading, including documents Ukrainska Kryvda said were proof of theft. Romaniuk says the files were doctored.

Hackers were able to remotely access Romaniuk’s computer hard drive after she clicked on a link infected with malware in an email from what appeared to be the Interior Ministry notifying her of criminal proceedings.

Eva Galperin of the US-based digital rights group Electronic Frontier Foundation, who analyzed the emails, called them part of a “targeted attack.”

“The emails had the official domain of the Ukrainian Interior Ministry and were tailored to appeal specifically to Oksana,” she said.

Others received similar malware-infected emails from addresses using the ministry’s domain. Most have refused to discuss the matter publicly for fear of further retribution for their work as investigative reporters.

In September, a campaign appeared to discredit Ukrainska Pravda, a leading online investigative news site, when a printed newspaper of the same name appeared in five cities outside Kyiv.

In what experts say is no coincidence, Ukrainska Kryvda’s website appears identical to that of Ukrainska Pravda, and the name given for its editor is the same as the Pravda deputy chief editor’s, a renowned investigative journalist.

Political analyst Berezovets says that shows significant efforts are being made to ruin the credibility of well-respected newsmakers and publications.

“The primary task of the whole plan,” he says, “is to sideline the most-read and influential media.”