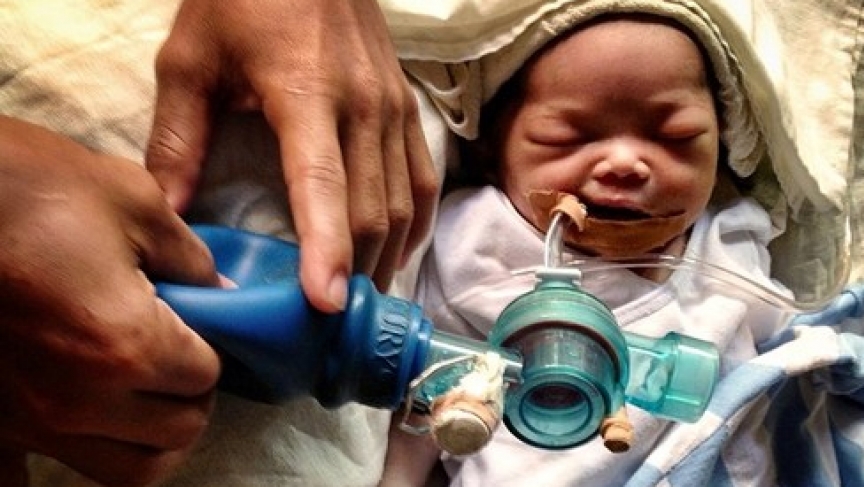 This is Althea Mustacisa, born in the aftermath of Typhoon Haiyan. Unable to breathe on her own, her young parents and medics have been hand-pumping oxygen into her lungs non-stop and round the clock since she was born.

Among the coverage of the typhoon disaster in the Philippines, the photographs really hit home.

And a lot of the most harrowing photographs over the past couple of weeks were taken by David Guttenfelder of the Associated Press. You can see some of them on his Instagram feed.

One of his most gut-wrenching pictures shows a newborn baby in a makeshift neonatal ICU unit, inside the chapel of what used to be the hospital in Tacloban. The baby, Althea Mustacisa, was born in the aftermath of Typhoon Haiyan. Unable to breathe on her own, her young parents and medics have been hand-pumping oxygen into her lungs non-stop and around the clock since she was born.

The bottom floor of the two-story Eastern Visayas Regional Medical Center flooded and the intensive care unit for newborns was destroyed. Doctors and staff took 20 babies from the unit to a small chapel for safety, placing some of them on the tiny church altar.

"We arrived and the chapel was full of mothers with newborn babies. And in the front right, at the altar, there were four baby cribs where the most delicate babies were being kept," Guttenfelder said.

He watched as mothers and fathers manually pumped oxygen bags. One mother told Guttenfelder about how she went into labor at the height of the typhoon. She walked through the rain for eight hours to get to the hospital and give birth. There was no electricity in the hospital. All of the equipment — incubators, normal ICU equipment — had been washed away.

When Guttenfelder returned to the hospital the next day, that young mother's newborn had taken a turn for the worse. The mother was steadily pumping oxygen into her baby's lungs.

"The look of helplessness on the mother's face, when I walked in, I knew that even that baby wasn't going to survive," he said.

Guttenfelder continues to publish photos of these small moments over Instagram. Many Filipinos have welcomed having their picture taken, even in the midst of a disaster, Guttenfelder says.

There's an incredible desire, according to Guttenfelder, to bear witness.