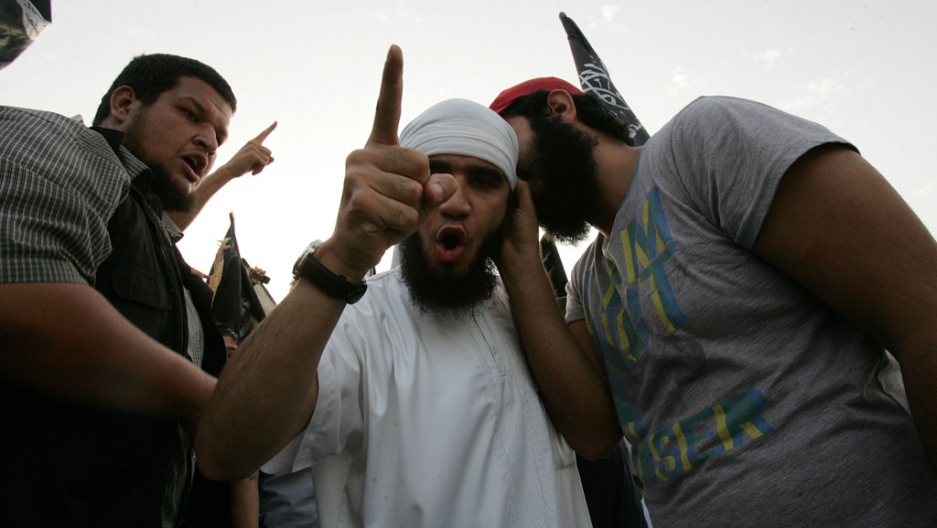 Supporters and members of hardline Islamist groups shout slogans during a demonstration in Benghazi, Libya, on September 14, 2012. The White House released 100 pages of emails on May 15, 2013, related to how it handled the terror attacks in Libya that killed Ambassador Christopher Stevens and three staff members.
Credit: AFP
Share

At least nine people were killed and 49 wounded in a clash between Libya’s military and Islamic militant group Ansar al-Sharia in Benghazi on Monday.

It was the first such confrontation between the army and Libya's top jihadist group.

A military source told the BBC that the army took action against the group after a civilian was stopped and allegedly beaten at a checkpoint operated by Ansar al-Sharia.

Schools closed and the army told residents to stay off the city streets as its soldiers traded fire with Ansar al-Sharia militants, but 200 people mobbed a building belonging to the group in west Benghazi, shouting, "No to Ansar,” local media reported.

"The latest events show the urgent need to implement law 53 to disband all [illegally] armed groups. The army and all its forces are carrying out its legal duties," Acting Interior Minister Sidiq Abdel-Karim told Libyan TV. The Libyan army was a "red line" not to be crossed, he added.

Ansar al-Sharia, which demands implementation of sharia Islamic laws as the sole source of legislation, controls areas of Benghazi as well as Syrte and Derna, also in eastern Libya.

The Jihadist group is believed to be behind the attack on the US consulate in Benghazi in Sept. 2012 that killed US ambassador Christopher Stevens and three other Americans.

Libyan and foreign analysts say Islamist groups are held responsible for much of the violence in eastern Libya but that the government has been loathe to take on the heavily-armed groups for fear of reprisal.