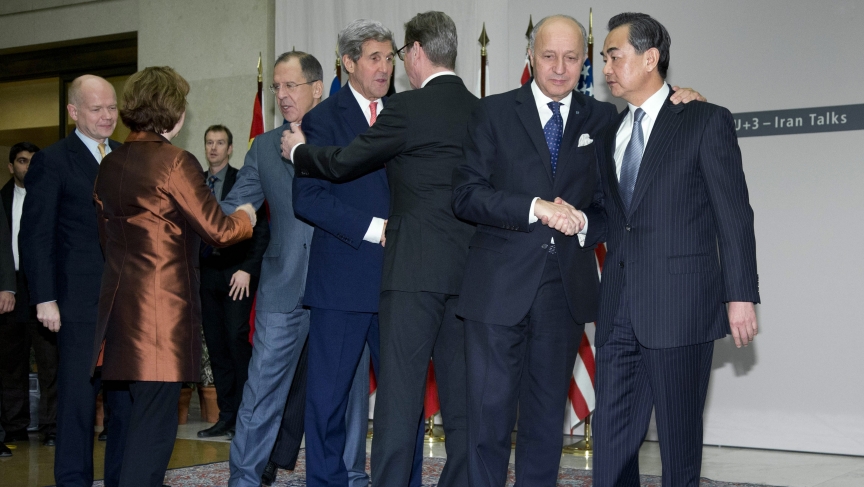 EU foreign policy chief Catherine Ashton, second from left, and US Secretary of State John Kerry, center, shake hands with other foreign policy leaders after Ashton read a statement to the media at the United Nations Palais in Geneva Nov. 24, 2013. Iran and six world powers reached a breakthrough deal early on Sunday to curb Tehran's nuclear program in exchange for limited sanctions relief.

The reaction to this weekend's Iran nuclear deal has been swift and vocal. As of Monday morning, and for much of the weekend, #Iran was trending on Twitter.

Iran and six international powers reached an agreement in Geneva to provide Iran with some relief from sanctions in exchange for limitations on its nuclear program, and further negotiations. Descriptions of the main thrust of the deal differ, depending on if you ask the US or the Iranians, according to The Washington Post.

Negar Mortazavi, a freelance journalist based in Washington, closely observes Iranian social media. She says there's been a great deal of joy and hope in the days since the deal was announced.

"This would be the main, real step that's been taken by the new government that would have an effect on everyday lives of people in Iran," she says. "I was just speaking to a journalist who told me it's not just the youth — you see a cab driver happy, you see workers happy, like laborers, and even housewives. Specifically the people who voted in the 2013 presidential election are very happy and proud right now."

Mortazavi says she, too, is excited by all that this agreement represents, internationally and at home.

"I voted in the 2013 elections. And a lot of people weren't even sure their [votes] would be counted, four years after what happened in 2009," she says. "I would say this is a seal of approval to those who took to the ballots again in the June election, that it is again another way to influence power and influence policy."

She adds that, by electing President Hassan Rouhani, voters sent a message tht they didn't want disagreements with the world anymore.

"We want agreements. We want relationships," she says.