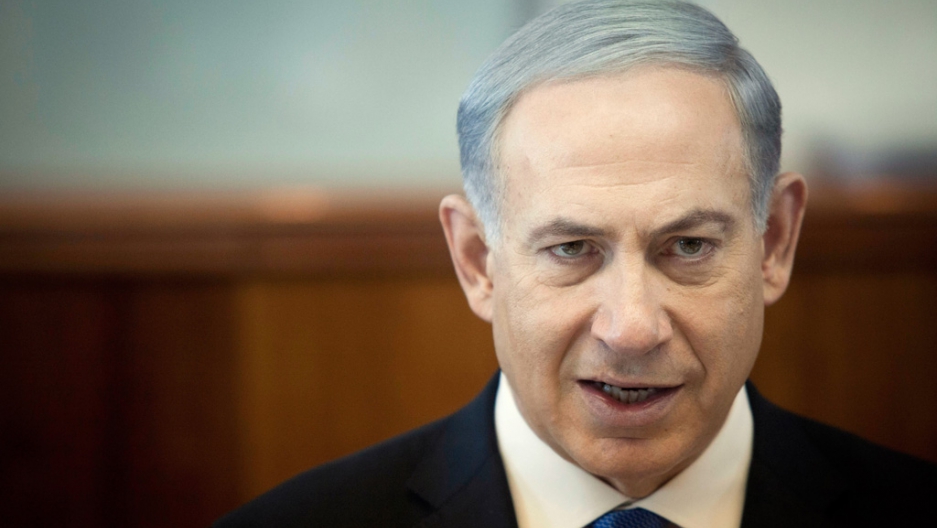 JERUSALEM — Israeli Prime Minister Benjamin Netanyahu deplored the agreement reached Sunday in Geneva, saying the deal with Iran is a "historical mistake" to which Israel is not bound.

"For the first time, the world's leading powers have agreed to uranium enrichment in Iran while ignoring the UN Security Council decisions that they themselves led."

Across the political spectrum, Israeli ministers condemned the deal.

More from GlobalPost: 3 Questions with Ambassador Nick Burns on the Iran nuke deal

The hard-right minister of intelligence, Naftali Bennett, said the deal is based on "Iranian manipulation, and on self-delusion," that could bring Iran closer to the ability to build a nuclear bomb.

However, even in an anxious Jerusalem that awoke to news of the interim agreement with Iran that will curtail, at least for six months, its nuclear development, more nuanced reactions could be discerned among Netanyahu's political allies.

In an interview with Israel Army Radio, Steinitz conceded that "there are some positive points. We know everything that is going on. We know what is public and what is not. We have a disagreement [with the United States,] but it is a disagreement among friends and allies."

Steinitz's comments seemed intended to counter the growing impression in Israel that Netanyahu may be out of the loop when it comes to a matter Israelis consider a top national concern.

On Sunday, it was revealed that the US has been conducting secret, backchannel negotiations with Iran since last March; Israel was informed of their existence only in September.

Netanyahu was elected to a third term in office last March, his public standing based to a great extent on his reputation as an uncompromising defender of Israel's sovereign rights, and on the basis of his fluent English and American mannerisms, which he has parlayed into a shorthand for his diplomatic acuity.

In recent weeks, he scathingly opposed the agreement. Its signing, Sunday morning, and the revelation of the secret backchannel, threaten his political self-definition.

On the Sunday morning news shows, Secretary of State John Kerry, who is expected in Jerusalem after Thanksgiving, reiterated his conviction that the deal "makes Israel safer."

"We believe very strongly that because the Iranian nuclear program is actually set backwards and is actually locked into place in critical places, that that is better for Israel than if you were just continuing to go down the road and they rush towards a nuclear weapon," he said on CNN.

Repeating a truism that has done nothing to assuage Israel's jittery nerves, Kerry underscored there is “no difference whatsoever between the United States and Israel on what the end goal must be here. We cannot have an Iran that is going to threaten its neighbors, and that has a nuclear weapon."

Israel, which views Iran as its No. 1 existential threat, responded with all the calm of a spouse who is encouraged to jump off a high cliff, with the promise the marital partner would be waiting below.

Since the historic conversation between Obama and Iran's new president, Hassan Rouhani, last September, Israel and the United States have been locked in an increasingly strident dispute about the best way to reach a shared goal: that of a nuclear weapons-free Iran.

Towering regard for Peres on the international stage belies what is, in fact, merely a ceremonial post, and it is rare for him to comment on political manners. In a statement issued by his office, Peres said "This is an interim deal. The success or failure of the deal will be judged by results, not by words. Israel like others in the international community prefers a diplomatic solution."

But, he continued, "I want to remind everyone of what President Obama said, and what I have personally heard from other leaders. The international community will not tolerate a nuclear Iran. And if the diplomatic path fails, the nuclear option will be prevented by other means. The alternative is far worse."

The average Israeli did little to conceal his dismay. Herzl Hasidim, 60, a construction engineer, sighed and said of the world powers who inked the deal "they were sold down the river. Iran wants its nuclear arms, and the world wants to restart commerce with Iran. Those are the interests at play here. The Iranians are much smarter than the Americans about this."

That said, the Iranian-born Hasidim, who escaped from Tehran after the Islamic revolution in 1979, expressed wonderment at Iran's clumsy diplomatic maneuvers in recent years.

"I've always thought the Iranian government should simply not have threatened Israel and made their bob in peace and quiet. It’s the threats that got them in this mess. But now they've realized that they can get what they want like North Korea did, by smiling and playing nice."

One of Israel's foremost experts on Iran, Meir Javedanfar, who is also Tehran-born, differed. "I think it's a good deal," he told GlobalPost. "It stopped the most sensitive part of Iran's enrichment and heavy water activity, for the next six months, while we are talking."

He said that Netanyahu's adamant reaction and Iran's announcement, also on Sunday, that it will construct two new nuclear power plants, are both destined for "domestic consumption."

Netanyahu, he said, "is worried this could take the attention away from Iran for a while, and if no one is talking about Iran, Israelis might focus on the peace process or on Israel's economy, which he is not eager to talk about."