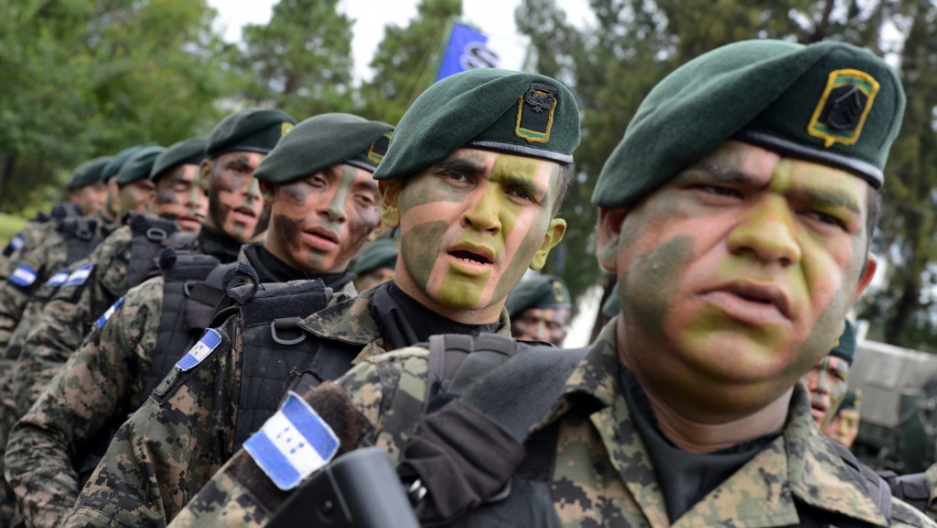 TEGUCIGALPA, Honduras — On a recent morning, residents of Flor del Campo awoke to the sight of Galil assault rifles.

Some 400 military police swarmed the roads of the poor, crime-plagued suburb in the hills south of the Honduran capital of Tegucigalpa.

The soldiers were young and fresh out of training. None smiled.

A corner shopkeeper says she was “very happy” they had come. They would protect residents from El Dieciocho, aka M-18 — one of Central America’s most notorious street gangs — which she says has been extorting small businesses on her street for years.

“The people who don’t pay, they kill,” says the shopkeeper, who refused to give her name and would only be interviewed inside her living room.

She listed two merchants gunned down since December on her block alone.

She feels safe for now, but what would happen if the military police left?

Honduras is among the world’s most violent countries, where street thugs and drug traffickers rampage while an impotent state largely looks on. Yet now, Juan Orlando Hernandez — the 45-year-old speaker of congress and the conservative ruling party's presidential candidate — has created new militarized cops, outfitted to match the firepower and sophistication of organized crime.

The experiment has public support, but it may not last. It’s sharply opposed by Xiomara Castro, 54, Hernandez's main rival on the left whose husband, Manuel Zelaya, was ousted in a 2009 coup.

With the general elections Sunday, Castro and Hernandez — who are neck and neck in recent polls — have turned the “policia militar” into a political football, leaving a vulnerable public caught in the middle.

Insecurity is a central campaign issue, for good reason. The United Nations estimates that 12,000 Honduran youths swell the ranks of El Dieciocho and its rival gang, the Mara Salvatrucha (aka MS-13). They rob, extort and kidnap. Some deal drugs and murder for hire, as well.

Meanwhile, nearly 90 percent of cocaine-smuggling flights out of South America make a stop in Honduras, according to the US State Department. The drugs mostly land near the Caribbean coast and move across the Guatemalan border. None of these areas has a robust state presence. It’s here, and in gang-infested pockets of the cities, where the slaughter is the worst.

The Honduran homicide rate climbed every single year from 2005 through 2011, according to the Honduran National Autonomous University (UNAH). At the close of 2012, the body count reached 7,172 for a rate of 85.5 per 100,000. That’s 12 times the recent global average calculated by the UN. (In San Pedro Sula, Honduras’ second-largest city, the murder rate was a whopping 18 times the global average.)

The National Police has proved too corrupt to make a dent. Reports that policemen threaten civil society and cooperate in vigilante killings of gang youth have so alarmed US senators, they’ve put a block on $10.3 million in security aid.

Yet the most damning proof of police dysfunction came from the force's own internal audit. It revealed last August that at least 1,800 ghost employees were collecting paychecks but not working. A thorough “purification” is now underway.

In the meantime, the ruling National Party has its own ideas for beefing up security. President Porfirio Lobo, who’s barred by law from seeking a second term, ordered soldiers out of their barracks and onto the streets as early as 2011. But it’s his party’s candidate, congressional speaker Hernandez, who takes credit for the special military police.

Hernandez’s gambit is to create from scratch a parallel security corps of 5,000 vetted members of the armed forces — the third most-trusted institution in Honduras after the churches, according to a recent public opinion survey by the US Agency for International Development (USAID).

Nearly 70 percent of those polled by the Honduran firm Paradigma in August said they favor the "policia militar."

In a frequently aired TV spot (below), Hernandez has been hammering rival candidate Castro for opposing new security force. Backed by a phalanx of uniformed men, he intones in a tough-guy voice, “I’m going to do whatever I have to do” to restore peace.

But Honduran civil society groups denounce Hernandez’s move as an expensive and crude campaign tactic — not to mention a big step backward.

“The military police goes against everything that we’ve fought for,” says Josue Murillo, coordinator of Alianza por la Paz y la Justicia, a broad coalition of nonprofits, unions, churches, and the UNAH. Murillo is referring to overcoming the state violence of the 1980s, when a powerful Honduran military “disappeared” scores of people suspected of being dangerous leftists. Civilians definitively took back the reins of power in 1999.

Some fear the military has already crept too far back into civilian affairs. In 2009, then-President Manuel Zelaya insisted on asking voters through a legally controversial referendum whether it was time to craft a new constitution. His critics claimed his true motive was to rewrite the rules so he could cling to power. The generals, citing a fear of violent unrest, forcibly removed Zelaya to Costa Rica.

“The coup weakened and fractured the state,” says attorney Leyla Diaz of CIPRODEH, one of Honduras’ oldest human rights groups.

That power vacuum, she believes, provided an opening for organized crime. But it doesn’t justify even more meddling from the military in the form of soldier-policemen, which will only confuse matters.

“It’s not known which functions are clearly those of the police and which are of the military,” Diaz says. “And in that confusion, what’s generated are human rights violations.”

The legislation passed in August does require the military police to get training on due process. However, the soldiers marched onto the streets in October after only two months of instruction, whereas national policemen receive a whole year.

In congress, Hernandez has been trying to enshrine the new force in the constitution. He recently refused to sign a security pact approved by the other seven candidates because it left out the military police.

The stakes are high, and not just in social terms. The World Bank has estimated that Honduras could boost its annual economic growth per capita by one full percentage point if it could reduce homicides by a tenth — an attractive prospect for a country that has one of the poorest populations and widest income gaps in Latin America.

Castro and her Liberty and Refoundation Party (LIBRE) have proposed an alternative: community policing. She says she wants a force that’s “close to the people, that knows us, that knows who we are.”

She hasn’t publicly offered many specifics, but it may look like a program that’s already in place — in the Flor del Campo neighborhood, of all places.

In 2009, the National Police launched a pilot project in Tegucigalpa to mimic Japan’s "koban" method of law enforcement. Koban calls for many small substations spread throughout a community. The goal is to foster informal contacts between officers and residents, thereby building trust. Proponents say the model has worked well in other countries like Brazil, and has reportedly shown some promise in Honduras.

But it’s unclear how community policing would stand up to the muscle of drug traffickers. And as residents in Flor del Campo will tell you, it hasn’t totally stopped El Dieciocho.

At one store in the neighborhood, a cashier says she hears gunshots every night, and won’t go out after 9 p.m.

She doesn’t support any presidential candidate, but is pleased the policia militar has arrived. That means maybe the “mareros” — the gangsters — won’t be around to collect their “war tax.”