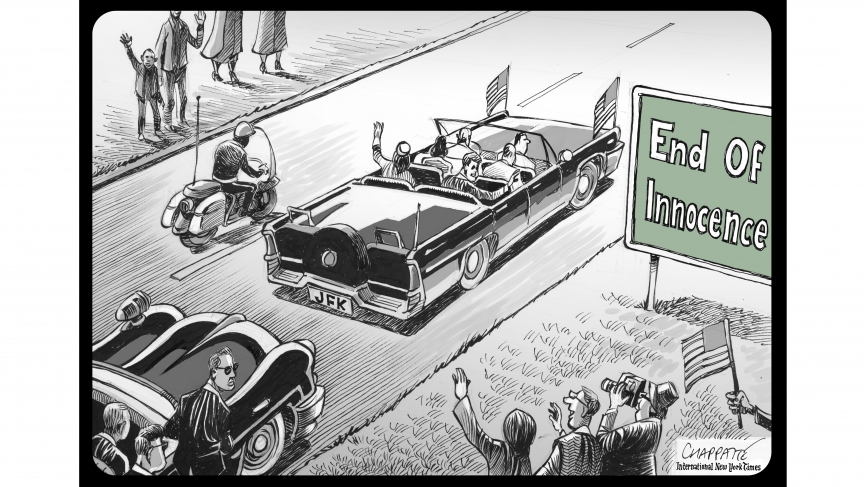 Even after 50 years, the sentiment expressed in this cartoon is what many Americans still feel.

On the 50th anniversary of the assassination of President John F. Kennedy, we are reminded that JFK's legacy extended far beyond the US.

When he visited Ireland, he was treated like royalty. Even the briefest stop in a small English town is warmly remembered there.

But Cuba may be the place where his death altered the course of international politics most. Few know that Kennedy was on the verge of reconciliation with Castro's Cuba just before his death, as PRI's The World reports. With the assassination, that effort died as well, and US relations with Cuba have stayed strained, to say the least.

30 years a slave — in modern London

Details are just starting to emerge of a horrific case of three women held in slavery in the middle of London for 30 years. One of the women had been held since she was a child. The entire case has sparked public outrage, as well as concern that there may be more women out there in the same position.  The BBC has the story.

Malaysia's Lizard King is back

Sometimes the nicknames given to international criminal masterminds can be a disappointment. Not so with Malaysia’s Lizard King, a man hunted across the globe for illegal trading in endangered species. The Independent has the story of Anson Wong — who was arrested and sent to jail back in 2010 for animal trafficking, but is reportedly back to his old ways.

If you build it, they will hack it. The Atlantic reports on a European plan to build an NSA-proof computing facility. The idea is that Europeans' data could be more secure if it was held in a European country. And it could also provide a competitive advantage for European countries, tapping into distrust of US companies in the wake of the leaks by former NSA contractor Edward Snowden.

The question, though, is whether the facility would really be beyond the reach of the NSA?

We voted for Rob Ford — and we'd do it again

He may be a crack-smoking, drinking-and-driving political embarrassment — but he’s our crack-smoking, drinking-and-driving political embarrassment. At least that's what the members of Ford Nation are saying about Rob Ford, the embattled Toronto mayor. PRI's The World connects with some of Ford's ardent supporters — folks who say they'll vote for him again when he's up for re-election.

Why did North Korea arrest an 85-year-old American?

The US has issued a blanket warning against any tourist travel to North Korea. That's because of a still-mysterious arrest of Merrill Newman, an elderly American tourist and Korean War veteran who traveled to the country a month ago. The Washington Post looks at the top four theories for what may have led to Newman's arrest, but each of them has its flaws. The bottom line? No one outside of North Korea knows what caused the 85-year-old veteran to run afoul of the country's rulers.

A rare storm in the Timor Sea has spawned a tropical cyclone that looks like it will threaten northwestern Australia. The storm is expected to make landfall by Sunday. Meanwhile, the official death toll in the Philippines from Typhoon Haiyan has risen above 5,000, and is expected to climb further.