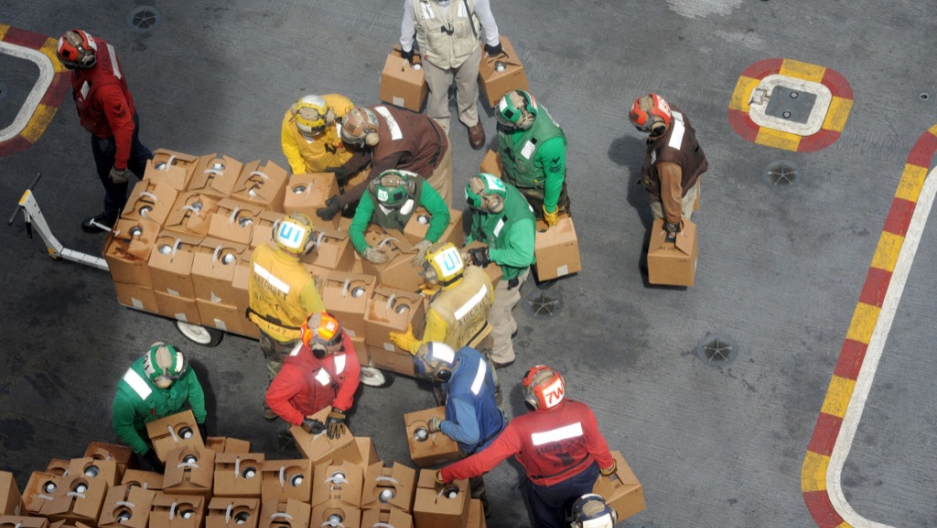 US sailors stack relief supplies on the flight deck of the Navy's USS George Washington aircraft carrier in the aftermath of Typhoon Haiyan.
Credit: US Navy
Share

RAMLE, Israel — Whether you define the malaise afflicting US-Israel relations as a split or a squabble, it is impossible to understand the strain without taking into account the unique web of long-standing ties that make up the bond.

Behind the political facade, technical and professional teams from both countries work side by side to an extent otherwise almost unknown between sovereign states.

Consider this: The only foreign posting of the United States National Guard Bureau is at the headquarters of Israel's Home Front Command, in Ramle, an ancient town in central Israel where Col. Alicia Tate-Nadeau, 49, has been embedded with Israeli forces for two years.

The relationship, and the exclusivity, is mutual: Israeli Lt. Col. Ariel Blitz, 38, is the HFC's sole representative abroad, stationed at the US National Guard headquarters in Arlington, Virginia.

The National Guard Bureau and Israel’s Home Front Command are ostensibly bodies that handle only internal matters. But they have each made an exception for the other: their relationship spans almost every area of activity, including 31 joint events in fiscal year 2013, according to Rose Richeson, the National Guard Bureau spokeswoman.

The unusual, seamless interface between the HFC and the National Guard was evident in the coordination of relief efforts earlier this month for victims of Typhoon Haiyan, which killed more than 5,200 Filipinos and displaced an estimated 4 million.

Several hundred US Marines arrived in the Philippines soon after the catastrophic storm to help with the distribution of food and emergency resources. Israel offered to send an urgent care medical team — but you can't just send a field hospital and 150 personnel into the area of a calamity and hope to be able to help.

So Lt. Col. Blitz picked up the phone.

"Blitz and I worked hand in glove," Tate-Nadeau said of preparing Israel's emergency mission to the Philippines.

The Israeli team needed to have a point of contact and information about the viability of getting heavy, delicate gear to a specific area. They needed to know where to get a helicopter. And electricity, in an area where communication is precarious.

Tate-Nadeau and Blitz worked with 14 US National Guard members who had already managed to land in the Philippines and scout out the situation.

"We had to coordinate all of the responses over three time zones and a disaster area," Tate-Nadeau told GlobalPost.

"My job was the bilateral work between the United States and Israel, to enable Israel to move in their advance party and later their main body, getting initial contacts on the ground, using our people to find out who to talk to and make it all run a little smoother," she said.

A week after the disaster, Israel had set up a full field hospital on the island of Cebu. So far, it has provided treatment for almost 2,000 patients.

NBC News captured some of the doctors at work:

On one hand, Tate-Nadeau and her counterpart are sophisticated, do-gooding calamity-chasers backed by the resources of powerful military organizations. On the other, they’re officers on active duty​, handling the fraught task of interfacing with civilian populations in times of great danger.

Both Israeli and US officials say having a representative in-country makes cooperation far easier.

"By being on site, our liaison officer is able to quickly respond to questions pertaining to the relationship, visit training and exercises to see how the Israelis work first-hand, and is able to provide guidance and recommendations based on her vast experience throughout her career," Richeson, the National Guard Bureau spokeswoman, said.

"There's a unique, unusual relationship between the US National Guard and the Israeli Home Front Command," Blitz told GlobalPost. "I walk around [in the US] in my IDF uniform — proudly, I should add — and I'm the only foreign officer here."

Lt. Col. Blitz visited Colorado a month ago, where he was updated on lessons learned from the devastating flash-floods that hit the state in September. Being able to “hear first-hand about methods and challenges” will “improve [the Home Front Command’s] ability to save lives," he said.

Maj. Max Goldenberg, the Israel Defense Forces officer in charge of international cooperation for the Home Front Command, declares somewhat sternly that Israel's relationship with the United States “stands above the level of cooperation with every other country.

“You cannot even compare. This relationship is not just bilateral but multilateral. And it's not PR," he said, glancing at a representative of the IDF spokesman. "It is operational."

While politicians quarrel about how to keep one part of the Middle East free of nukes, the officers involved in this singular cooperation continue their work as if oblivious.

The case of the Philippines, Tate-Nadeau argues, "is a real-world example that whenever you have relationships like this, already built-in and in place, it allows you to put things into action immediately. You don't have to waste time hunting around for a point of contact. You just get people on the ground to do what they do best."

Editor's note: Figures have been updated since this article was first published.