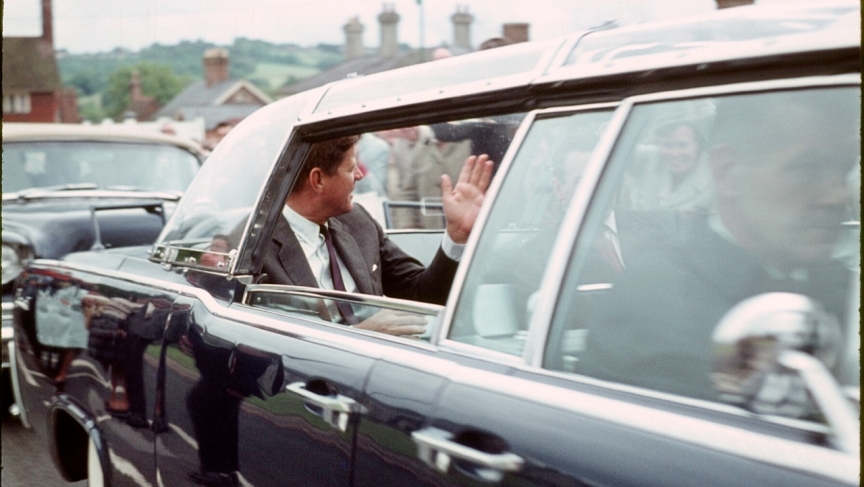 Forest Row is one of those blink-and-you’ll-miss-it kinds of places. It’s just a dot on the map in the middle of green forests and English farmland. And in the center of town, there's a plaque.

“This stone commemorates the visit of John Fitzgerald Kennedy, 35th President of the United States of America, to Forest Row on Sunday, the 30th of June, 1963.”

As short as Kennedy’s tenure as president was, he still managed to squeeze in over a dozen foreign visits at the height of the Cold War, and one of the last included a trip to this tiny English village in rural Sussex, just south of London, to attend Sunday Mass.

President Kennedy was en route back to Washington from visits to Germany and Ireland when he stopped in Britain for a quick meeting with then British Prime Minister Harold Macmillan at his country estate, named Birch Grove.

Old newsreels from the day report that the stopover lasted a mere 24 hours. With such a tight schedule, Kennedy's visit to Forest Row’s only Catholic church for Sunday service would have been brief — not much longer than the Mass itself.

Lifelong resident Harold Waters, who was 23 years old then, says it was a big deal for the village. He and his wife grabbed the new color camera they’d bought for their honeymoon and went out to watch the president’s motorcade arrive.

“There was several hundred people, I suppose, watching Kennedy come through,” says Waters from the same corner he stood on fifty years ago. “My wife was five months pregnant at the time with our first daughter. So we came down here and waited and, eventually, we saw the cars coming down the road — an unmarked police car at the front, and two security cars and Kennedy’s limousine. He came down the road [and] very slowly went around the corner.”

So Waters was well positioned to see the president. He holds up a rare, crystal clear, color photograph taken so close you can see the reflection of the crowd in the side of the car as Kennedy waves from inside.

“I nipped across to the traffic island that’s just over there, had a word with the policeman and the security man, and said, ‘Can I take a picture of President Kennedy from here? Is that alright?’ And they said, ‘Yes.’ So I stood there and I got the picture I wanted,” recalls Waters. “It wasn’t until he was assassinated that I realized that he’d only been three or four feet from me with no bulletproof glass or anything between us.”

Indeed, the car was the same Lincoln Continental Kennedy rode in when he was assassinated less than five months later.

Down the road, another longtime Forest Row resident, Tony Lewin, shows me Our Lady of the Forest, the Catholic Church where he caught a glimpse of Kennedy in 1963, when Lewin was a kid. Today, there’s nothing but a dilapidated, old building. The church closed years ago.

“Trying to picture him here is quite something. It’s hard to, hard to believe,” says Lewin, stepping through the leaves in the garbage-strewn courtyard in front of the church.

“I was up there by the hedge on the other side of the road. Then they stopped and he got out and he went and shook hands with lots of people. And Kennedy was a bit of a hero. He was good looking, he was glamorous, and you know, everyone was amazed.”

They were amazed probably because, even in Britain, Kennedy was the first American TV president. “The age of television in American politics had arrived in a way that it hadn’t in Britain,” says Iwan Morgan, a professor of American history at University College London.

He points to Kennedy’s performance in the first televised, US presidential debate in 1960, and the numerous televised presidential addresses Kennedy gave from the White House.

“These pictures were always beamed over to us,” says Morgan. “And you know, we felt we knew Kennedy better than we knew the British Prime Minister.”

Morgan says, unlike past U.S. presidents, Kennedy captured the imagination of the British people, partly because he was a symbol for Britain’s changing sense of itself in the post-war era.

“We’d been led by men of a certain generation for many years, or people who came from certain backgrounds,” says Morgan. “And Kennedy was seen as somebody fresh. You know he was young, and of course the Kennedy’s had some indefinable celebrity status and their impact was incredible.”

Before 1963 was over, Prime Minister Macmillan would be out of office, Kennedy would be dead, and Morgan says, the 1960's would go on to see a youth counterculture that would change the U.S. and Britain forever.