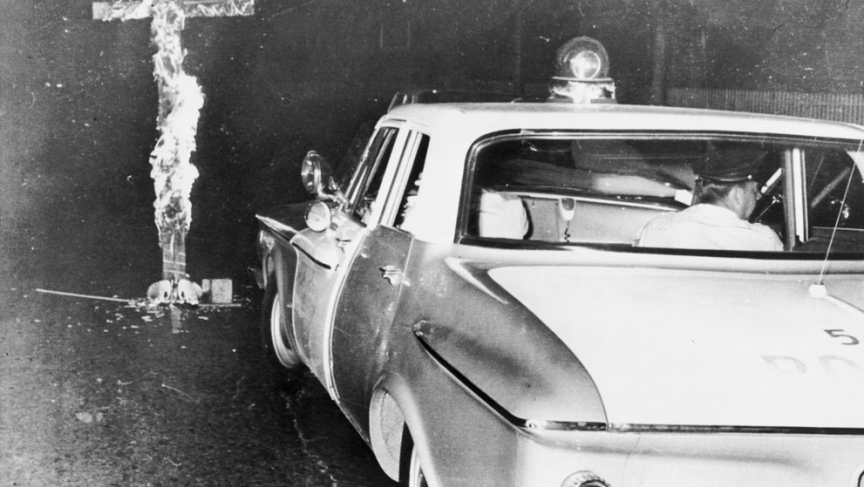 Chicago police move to knock down a burning cross in front of a home, after an African-American family moved into a previously all-white neighborhood, August 3, 1963. The civil rights movement in America was one of the historic trends transforming the world at the time of Jack Kennedy's assassination.

1963 was a historic year, and not solely because of the JFK assassination.

The day of the shooting in Dallas, November 22, 1963, was the day the Beatles released their second album, "With the Beatles," premiering such classics as All My Lovin', Money and I Wanna Be Your Lover.

On the very next day, the BBC aired the first episode of the classic sci-fi TV series Doctor Who. In fact, the show was broadcast late, because the news ran overtime, still filled with details of the aftermath of the Kennedy killing. It was re-run the following week to try and garner more interest.

1963 was also an epic year for movie buffs. Liz Taylor and Richard Burton dazzled in "Cleopatra." Steve McQueen almost made it to freedom in the "Great Escape." And Tippi Hedren made the mistake of picking up some lovebirds in the Hitchcock classic "The Birds."

Some of the other greats released that year included "The Longest Day," "Lawrence of Arabia," "Mutiny on the Bounty" and "To Kill a Mockingbird." 1963 was also the year that Americans saw the first Bond movie, "Dr No." It was released in the US in May, seven months after it premiered in the UK.

Two famous writers died the same day as JFK. The door to Narnia closed with the passing of C.S. Lewis, while fans of Aldous Huxley were left wondering what was to become of their Brave New World. The Birdman of Alcatraz, Robert Stroud, passed away the day before, on November 21.

JFK himself was said to be reeling from news of the murder of South Vietnam President Ngo Dinh a couple of weeks beforehand, who was killed in the aftermath of a coup that ousted him. It was a coup that JFK allegedly approved. Afterwards, South Vietnam continued its slide into chaos, drawing in ever increasing American involvement. All told, 122 Americans died in Vietnam in 1963.

The Cold War was constantly in the headlines as Washington and Moscow competed for influence and control in much of the world. The struggle for civil rights dominated the headlines in the US.

But for most of the world's population, the biggest change going on was the process of decolonization. Pushed by the United States, as well as by the demands of the colonial peoples themselves, Britain, France and other European powers were granting independence to territories they had dominated for generations in Africa, Asia and parts of the Americas.

Algeria became independent from France in July; Kenya and Zanzibar became free in December. New states were being formed all over the world. Malaysia was created at this time from a union of the former British territories of Sabah, Sarawak, and the several states of Malaya, together with Singapore for a short while.

And the US Peace Corps was establishing its first presence in Africa.