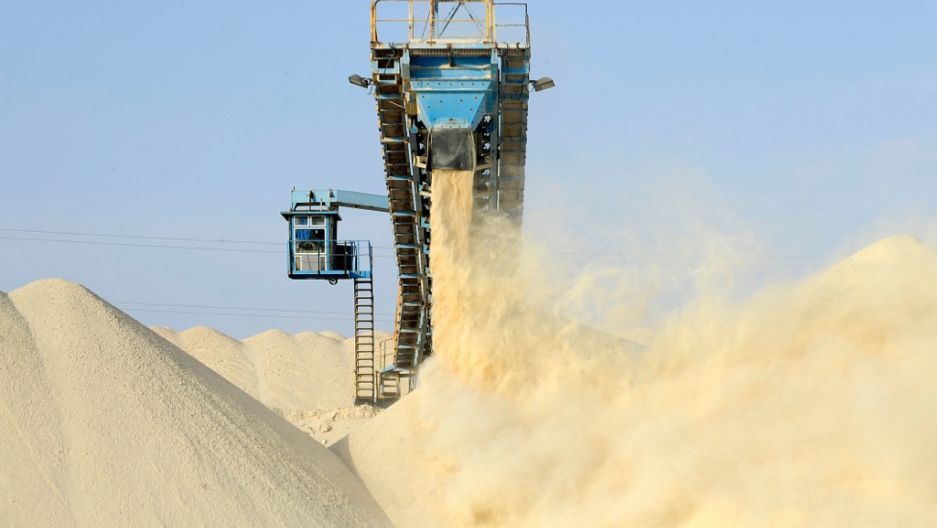 A picture taken on May 13, 2013 shows untreated phosphate being dropped off the end of a conveyor belt at the national Moroccan phosphates company's Marca factory.
Credit: FADEL SENNA
Share

DAKHLA REFUGEE CAMP, Algeria — Ghali Zbeir lived most of his life as a refugee in this desert camp, knowing little more than his people’s poverty, hunger and despair. It wasn’t until he moved to Russia for advanced study in geology that he learned he should have been a rich man.

Morocco claims 75 percent of the planet's known reserves of phosphorus, an essential ingredient in commercial fertilizer. That gives the North African country a near-monopoly on the multibillion-dollar global trade of the mineral mined from phosphate rock, with clients on every continent.

But Zbeir and others say a good portion of Morocco’s product — about a sixth — comes from land that isn’t theirs. The Bou Craa mine, one of several operated by the national phosphate company, sits squarely on Western Sahara territory that's been bitterly contested for some 40 years.

In 1975 Morocco annexed Western Sahara, a Colorado-sized territory along the Atlantic coast, a move recognized by no other state. The Polisario Front, generally recognized as the representative of the indigenous Sahrawi population, waged a guerilla war for independence against Morocco that officially ended when the UN brokered a ceasefire in 1991.

But the status of the Western Sahara territory has never been resolved, and young Sahrawis are considering restarting the fight. That would stall production from the world's largest exporter of phosphate — bad news for the international market.

Morocco continues to treat Western Sahara territory as its own, occupying and developing the most fertile and resource-rich land. Meanwhile most Sahrawis live either in the Western Sahara's barren desert or in Algerian refugee camps, estranged from the resources they feel should be theirs.

Mineralogist Zbeir wants to change that. Back home after 15 years in Russia, he now serves as the coordinator of the Sahrawi Resource Watch, an initiative set up earlier this year by Sahrawis who allege Morocco is breaking international laws by extracting and selling Western Sahara phosphate.

“All the world, Europe, Russia, the US, they are helping the criminal activities of Morocco continue, because they don’t say anything,” said Zbeir. “At the same time, not one of these countries recognizes Moroccan sovereignty in Western Sahara. It is a double standard.”

In 2002, the UN Security Council requested a legal opinion on the exploitation of natural resources from the disputed land.

In his opinion, Former Secretary General for Legal Affairs and Legal Counsel to the UN Hans Corell ruled that if exploration and exploitation activities were to proceed without respecting the interests and wishes of the people of Western Sahara, the contracts would be violating international law.

Morocco claims the exploitation does falls in line with international law. Having poured millions into development projects in the territory under de facto Moroccan control, the government argues revenues are going directly back to the community and benefiting the local population.

Moroccan officials did not respond to specific requests to comment for this article. But in a phone interview last December, minister of communications and government spokesman Mustafa Khalfi said phosphate exploration in the occupied territories is part of a conscious development strategy.

But Sahrawis, a population-in-exile that has lived for decades completely dependent on foreign aid, say no one is consulting them. Local benefits aren’t what Morocco claims, either, activists contend: while Morocco says 55 percent of the workers at Western Sahara’s Bou Craa mine are Sahrawis, activisits say they make up less than 20 percent of the workforce.

Morocco’s state-owned phosphate company, the Office Cherifien des Phosphates (OCP), earned an estimated $2.8 billion in net profit in 2008 — a year of soaring global food prices and other recession pressures — nine times what it earned in 2007. The same year, Moroccan King Mohammed VI’s net worth jumped by a billion dollars, making him the seventh-richest monarch in the world.

The price of phosphate has since dropped, but remains nearly 300 percent higher than in 2007.

More from GlobalPost: The EU is right about Western Sahara — which means it is wrong about Israel

“Morocco and the companies buying phosphate will talk about the ‘benefit of the population,’ but the Corell opinion does not say [a project should] ‘benefit the population.’ It says the ‘wishes of the people’ must be respected,” said Hagen. “By using the term ‘wishes’ it means that people must consent to it, they must be consulted. By using the term ‘people’ it means the people of Western Sahara, which is all those with the right to self-determination, which includes Sahrawis living in the camps,” he added.

But with just five countries sharing nearly all of the world's phosphate reserves — and farmers dependent on the resource to keep feeding the world’s growing population — there aren't many other sellers who can match Morocco's output.

That brisk business only adds to the growing frustrations that have led many Sahrawi youth to advocate for war with Morocco.

“This generation, they have open eyes, they see the world, and they start comparing,” said Toufa Mohamed, a 54 year old mother who has lived in Algeria's Dakhla refugee camp for more than 30 years. “They are asking why we are living like this when we have our natural resources and we could be wealthy. Why? We have no answer.”

More from GlobalPost: These attempts to help Africa are really offensive