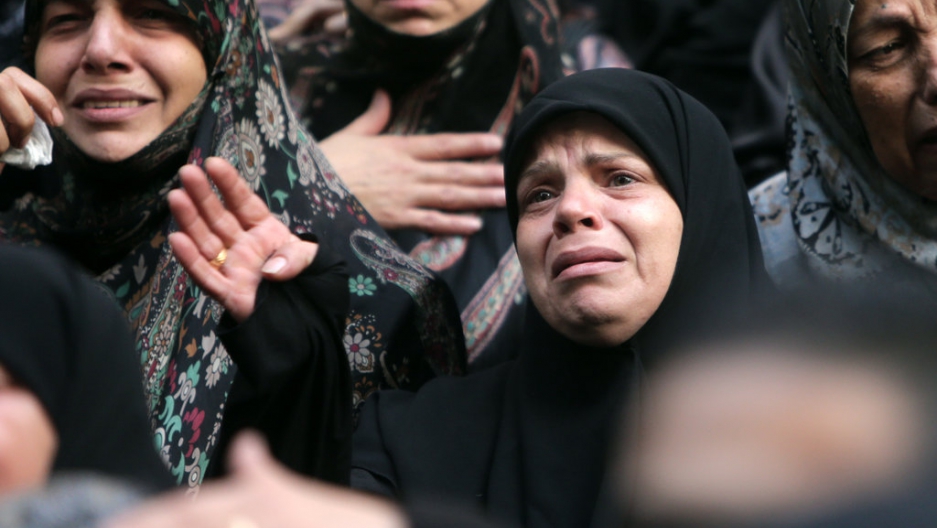 Shia women mourn during the funeral of four Iranian embassy security guards who were killed in the suicide attack outside the Iranian Embassy in Beirut. Thousands of people turned out to mourn for the guards, all of whom were members of Lebanon's powerful Shia movement Hezbollah, which is also backed by Iran and is fighting alongside Assad's troops against Sunni-led rebels.
Credit: Joseph Eid
Share

BEIRUT — In the aftermath of the horrific twin bombings of the Iranian Embassy here, streets remained strewn with rubble and burned-out cars. Two suicide bombers unsuccessfully attempted to blow up the embassy, killing 25 and wounding more than 150. It made the once peaceful, upper-income Shia neighborhood of Bir Hasan look like a war zone with violence and devastation Lebanese haven’t seen in Beirut's residential areas for years.

Many analysts say the Tuesday terrorist attack was retaliation for Iran’s support for the government in Syria’s civil war. An extremist Sunni Muslim group, the Abdullah Azzam Brigades, took credit for striking at Iran, which is predominantly Shia, thus stoking the already smoldering religious tensions in the region.

Groups in Lebanon and regional powers such as Iran, Israel, Turkey and Saudi Arabia have all taken sides in the Syrian civil war. While politics remains at the heart of the dispute, the battle has taken on an increasingly sectarian character, cutting along the Sunni/Shia lines of demographically divided Lebanon. Sunnis and Shia constitute about an equal percent of the population, with Christians and minorities making up the rest.

“Sectarian divisions between Sunnis and Shiites have come to dominate the narrative because that suited various powers in the region,” according to James M. Dorsey, a senior fellow at the S. Rajaratnam School of International Studies in Singapore. “The danger is that the imposition of a sectarian narrative begins to live a life of its own.”

Holly Dagres, a researcher at Cairo Review of Political Affairs, noted that the the Abdullah Azzam Brigades, an Al Qaeda-affiliated group, justifies killing civilians because it’s waging “jihad against the Shiites who are seen as kaffirs (infidels). In 2012, the AAB threatened to punish Lebanese Shiites for backing [Syrian President Bashar al-] Assad. The bombings are blowback of such support.”

The Beirut embassy bombing is believed to be the fourth violent sectarian attack in Lebanon in the past five months.

* In July a car bomb exploded in a Shia neighborhood of Beirut, wounding more than 50.

* On Aug. 15 another car bomb killed 30 and wounded more than 300 in a different Shia neighborhood.

Extremist Sunni groups were suspected of planting the bombs in an effort to support Sunni fighters in Syria. Tuesday’s Iran embassy bombing was a serious escalation because it involved suicide bombers, a tactic not used in the previous incidents.

The Abdullah Azzam Brigades named itself after an Arab Mujahideen leader who fought in Afghanistan in the 1980s and died in Pakistan in 1989.

The AAB spiritual guide, Sheikh Sirajeddine Zuraiqat, tweeted his group’s responsibility for the embassy bombing, demanding that "all Iran fighters withdraw from Syria and our families [be] granted freedom in Lebanon.”

The AAB and similar extremist Sunnis cloak their political views in religious rhetoric against Shiites, according to analyst Dagres.

Such groups “do not accept Shiites because of an array of reasons such as the culture of the sainthood [and] their means of seeking blessing through holy shrines. Although Bashar Al-Assad is Alawite, it is seen as a sect of Shiite Islam and therefore on the side of the Shiites.”

Such sectarian hatred is a distortion of Islam used to justify attacks on innocent civilians, according to Reza Sanati, a Research Fellow at the Middle East Studies Center, Florida International University.

“Al Qaeda ideology allows mass, systemic violence on civilians – Muslims and non-Muslims alike – for the attainment of political goals,” he said. “In this specific case, Al Qaeda’s goal was to attack a sworn enemy: Iran.”

The majority of foot soldiers in extremist groups “engage in this behavior for more than religious reasons,” said Sanati, “usually for political and for personal profit as well. Many come from poor backgrounds and find this line of work as highly profitable, but obviously very dangerous. The financiers of the extremists are almost always motivated by geostrategic interests, as opposed to just sectarian reasons.”

For example, he noted, “The Saudis do not attack a Shia-majority country like Azerbaijan.” Similarly, Iran backs Christian Armenia in its dispute with Azerbaijan.

Along the regional sectarian fault line, Iran is predominantly Shia. The difference between the Sunni and Shia dates back to the 7th century, following the death of the Prophet Muhammad. The Shia denomination believed a direct descendant of the prophet, his cousin and son-in-law Ali, should inherit what was a political and religious position and that direct lineage is still what maintains the theological purity of the faith. Iran supports Hezbollah, a prominent and powerful Shia political and military force within Lebanon. And Iran has long supported the secular Syrian regime of Bashar al-Assad for geopolitical reasons.

On the other side sits Saudi Arabia, predominantly Sunni, which split from the Shia in the 7th century and followed the rule of a friend of the prophet, Abu Bakr. The Sunni denomination represents approximately 70 percent of the Muslim world, and the Shia represent between 10 and 20 percent.

The Saudi monarchy adheres to a particularly puritanical Sunni set of beliefs, known as Wahhabism. This ultra-conservative view of Sunni Islam is embraced by the more militant regional Islamist movements and opposition groups in Syria. So Syria has become a kind of proxy war, broadly pitting Assad’s Iranian-backed government against a Saudi-backed opposition.

Most Western powers side with the rebels fighting Assad, while Russia supports the regime.

This Sunni-Shia tension is exploding elsewhere in the region as well, particularly in Iraq, which is also divided between Sunni and Shia Muslims, along with minority Kurds and Christians. The sectarian violence in Iraq has reached a level not seen since the worst days of the US occupation of Iraq in 2005-6.

While outside powers stoke the Sunni-Shia divide, sectarianism has become an increasingly dangerous force, according to analyst Dagres.

“Syria is a grand example,” she said. “Even if one is anti-Assad but Alawite, it can get one killed and vice versa. No longer does 'who side you support matter' — it's all about your religion, and it's becoming worse by the day.”

GlobalPost special correspondent Reese Erlich's reporting from Syria was funded by a grant from the Pulitzer Center on Crisis Reporting.