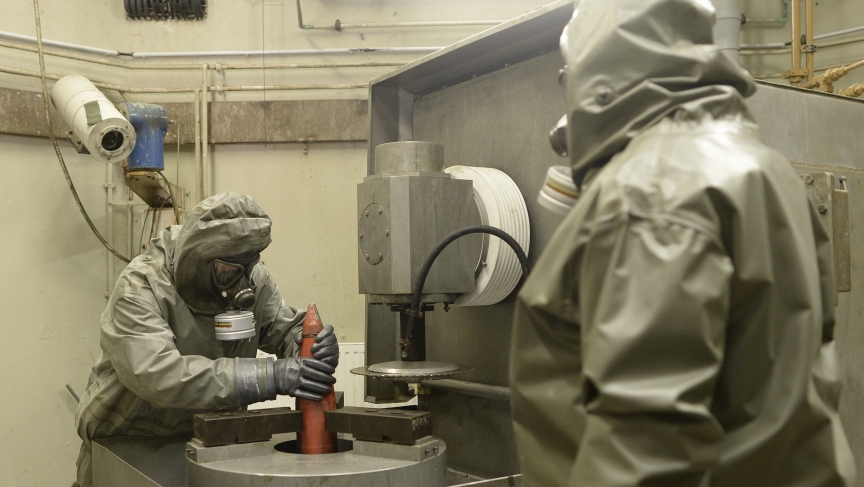 Workers dressed in protective clothes hold a mock chemical World War II grenade during a demonstration in a shelter at the Society for the Disposal of Chemical Weapons and Ordnance (GEKA), October 30, 2013.

Albania and Norway are the latest countries to reject the idea of hosting on their soil the destruction of Syria's chemical weapons arsenal.

The UN-linked Organization for the Prohibition of Chemical Weapons (OPCW) has been searching for a place relatively near Syria for the operation, but away from that country's civil war.

Now the group is considering destroying the toxic chemicals at sea in international waters, perhaps on a ship or platform. But there are challenges.

"We are talking about the precursor chemical for Sarin gas, which is toxic and it would certainly be toxic for marine life," says Ralf Trapp, an independent chemical disarmament specialist in France.

"You have to make sure you can control contamination and you can make sure that, if there is an accident, you can actually handle the situation and not end up having to spill the agents into the sea," he says.

Then, he adds, you need to do something to dispose of the "reaction products" after the destruction, some of which would be toxic. There is also the question of security, unexpected events and bad weather to consider. "Ships do sink once in a while," Trapp says.

Destroying chemical weapons at sea has been done before.

Japan destroyed hundreds of chemical bombs that it found on the seabed. The US also had a chemical weapons destruction facility at Johnston Atoll in the north Pacific, though that facility has now been dismantled.

What is different this time is the large amount of the chemicals, says Trapp, something like 1300 tons of it.

While no one owns the high seas, Trapp says that doesn't give the OPCW a "carte blanche" to destroy the stockpiles there.

"You still have to respect international law. There is the UN convention on the law of the sea which sets conditions to the activities you can conduct at sea," he says, "and how you have to use precautionary principles and methods to prevent pollution of the maritime environment."

According to Trapp, the option of destruction at sea is not ideal, but it is something to consider.

"There is quite a bit of work to do before you can take a decision on this, but I wouldn't rule it out as an option at this point in time."