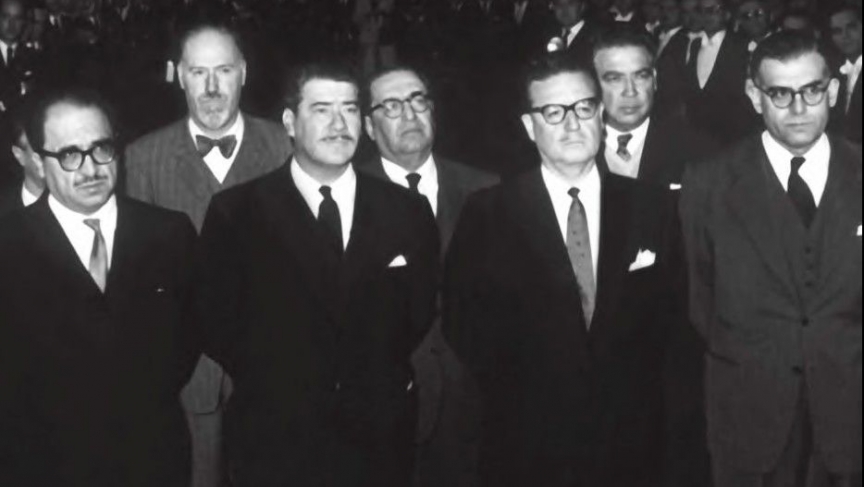 Salvador Allende, front row, third from left, is said to have committed suicide in 1973 — but conspiracy theories persist that he was actually murdered.

Many Americans doubt the official word on John F. Kennedy's assassination. It's the quintessential conspiracy theory.

But it's not the only one.

Take 9/11 — 1973 — the date of the military coup in Chile. On that day, Chile’s socialist President Salvador Allende committed suicide in the presidential palace.

The official story is that as troops loyal to General Augusto Pinochet stormed the building, Allende shot himself with a rifle. But conspiracy theorists have long argued that Allende was assassinated. In 2011, an independent forensics expert, Luis Ravanal, spoke to Paris-based Euro News.

“The report and the conclusions that I wrote established the existence of at least two projectiles, two impact wounds, from bullets of two different weapons,” Ravanal said.

Later in 2011, Allende’s body was exhumed. A group of international forensic experts examined it and concluded: suicide. The case was closed in 2012.

But many remain unconvinced, and not only about Allende’s death.

Coincidentally — or not — one of President Allende’s close friends died only days after him, apparently of natural causes: Chilean poet‚ and Communist, Pablo Neruda.

A conspiracy theory claims he was poisoned on orders from General Pinochet. And so, this year, Neruda’s body was exhumed and examined. The conclusion? Natural causes.

Still, Neruda’s nephew, Rodolfo Reyes, vowed to continue “to investigate what he really did die of, because more clarity is needed.”

Uncertainty — any uncertainty at all — provides oxygen for a conspiracy theory. And that’s why the unexpected deaths of national figures are such fertile ground for theorists.

“They are typically very difficult to comprehend at a national level,” says Viren Swami, who studies the psychology of conspiracy theories at the University of Westminster in London.

“Information about those kinds of events tends to be incomplete. So when you want a fuller picture of what’s going on, you might, for example, adopt a conspiracy in order to try and understand that event.”

Making sense of the world

Swami says that, in academic circles, conspiracy theorizing used to be seen as a pathology — a kind of paranoia. But he and other scholars are taking a different tack, by asking what need does a conspiracy theory serve?

“It allows for the voicing of an opinion among people who are powerless or disadvantaged,” he says, “offering a means of almost replying to and questioning mainstream thinking.”

Cambridge University recently launched a Conspiracy and Democracy research project. Among other things, it’s looking at the influence of the giant Google-shaped elephant in the room.

With so much information at our fingertips, and — in global terms, at least — very little power, it might be that people feel they can only make sense of the world by positing global conspiracy theories of shadowy people operating in secret.

Richard Evans, who’s leading the Cambridge project, says we expect to be able to access any information, anywhere, so we also demand ever more transparency from our governments.

“And the problem with that,” continues Evans, “is that government can never be completely transparent. There have to be some secrets in government, some confidentiality, and so that breeds distrust.”

Distrust in government is healthy to a degree. Some conspiracy theories, even if incorrect, have likely forced the release of more information, simply by publicly challenging official accounts. Conspiracy theorists, however, rarely question their own theories.