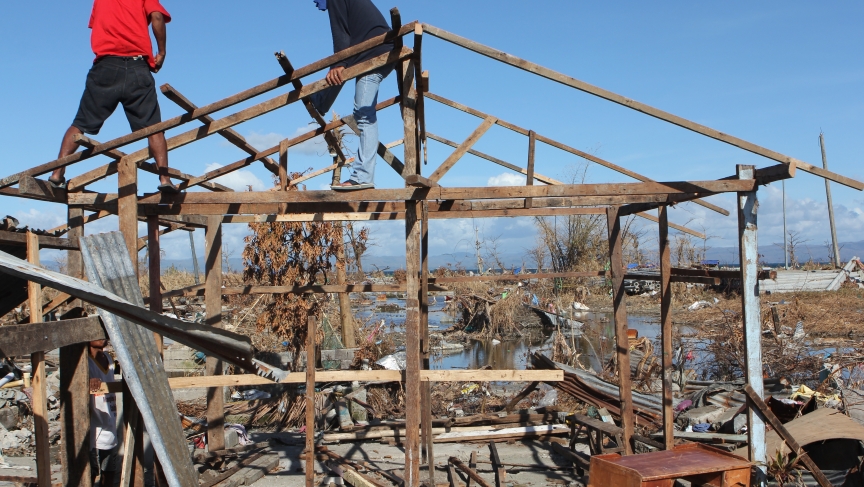 The Vergara family is rebuilding a home on the site of the one devastated by Typhoon Haiyan, using lumber and corrugated tin gathered from the wreckage.

The surviving members of the Vergara family have returned to their home in Costa Brava, one of the most devastated neighborhoods in the hard-hit city of Tacloban. Of the 10 of them, only three survived the storm.

Virgilio Padilla Vergara, who’s 49, is hammering together a simple frame for a new house on the ruins of their old one, using lumber and corrugated tin he gathered from the wreckage.

“I don’t want to leave here,” he says, “because it’s a reminder of my parents.” His parents drowned in the storm surge.

Costa Brava is flanked by the sea on one side and a bay on the other. The storm surge crushed every house in Costa Brava and swept away hundreds of people. Many of the bodies washed up in a neighborhood on the other side of the bay.

Virgilio’s sister, Leonora, was able to grab hold of a piece of wood, while she was tossed in the flood for three hours. When the waters receded, she walked several kilometers back to Costa Brava.

She says three of her children died in the storm; one of them was ripped from her arms.

“If I hadn’t heard my oldest daughter screaming for me, I would have let myself die, too,” she says.

Today, she’s hanging up laundry on some downed electrical wire.

The signs of recovery are all around. The main road is cleared and most of the bodies have been taken away and placed in body bags. A week ago, Tacloban seemed hopeless, but now there’s a sense the city is slowly returning.

Leonora says there are still some bodies buried in the wreckage of their neighborhood. And while food aid is starting to trickle in, it’s only enough for a small meal once a day. Clean water is still hard to come by, and her daughter has an untreated gash on her scalp.

Leonora worries thieves might take what little they have left. She’s also afraid her daughter may get raped. As soon as it gets dark, the family, along with a few other survivors, barricade themselves in their shelter using corrugated tin. Her brother and a few other men in the neighborhood stay up all night, keeping guard.

She says she wishes she could go to Manila. She wants to be away from the destruction, and knows she’d be safer there.

But every day, she wakes up thinking of her lost children. She spends her days walking the neighborhood and turning over debris, hoping to find them.

“If I could only just see their bodies,” she says, “that would help. I can’t leave until I do. That’s why I’m rebuilding here.”